Francisco Liriano: Buy the Dip or Fade the Rally?

Francisco Liriano's career is a case study in volatility. Season long stretches of dominance intermixed with years that belong on the back of a milk carton. To date his 2016 season is a bit of both. Coming off a spectacular 13-K performance should we buy Liriano's dip or fade his summer rally?

Share All sharing options for: Francisco Liriano: Buy the Dip or Fade the Rally?

Speculators in the stock market look for businesses with something Warren Buffet calls "a durable competitive advantage." Businesses that, though struggling, have not spilled their secret sauce. Over the long run, they say, a stock price will fluctuate up and down for all sorts of ephemeral reasons but true value, a company's intrinsic worth, will eventually win the day.

Pittsburgh Pirates GM Neal Huntington and manager Clint Hurdle pounced on undervalued intrinsic worth in 2013 when they scooped up Russell Martin and Francisco Liriano for pennies on the dollar. We all know how well that investment began - the Pirates finished with a winning record and a playoff win for the first time in twenty years. No investment profits forever, though. Even one time market darlings struggle.

For Francisco Liriano much of the 2016 season looked like a textbook investment implosion.

The one time stud leads Major League Baseball in walks with 5.30 BB/9. Some of his other sub-stellar peripherals include a 16.9% HR/FB, a 4.91 FIP, to go along with an above average hard contact rate and a WHIP of 1.55. His BABIP is the current league average, .297, so the star's inconsistent season should not be dismissed as a poor run of luck.

Liriano's struggles are his own, but are his struggles noise, a normal part of market ebbs and flows for everyone not named Clayton Kershaw? Or is it ten years into his already volatile career, are 2016's struggles more fundamental -- has Francisco Liriano spilled his secret sauce?

To answer that first we have to define what his secret sauce is (was). Liriano dominates by keeping the ball on the ground and getting batters to chase his filthy sinker out of the zone.

Take a look at some of the key metrics. 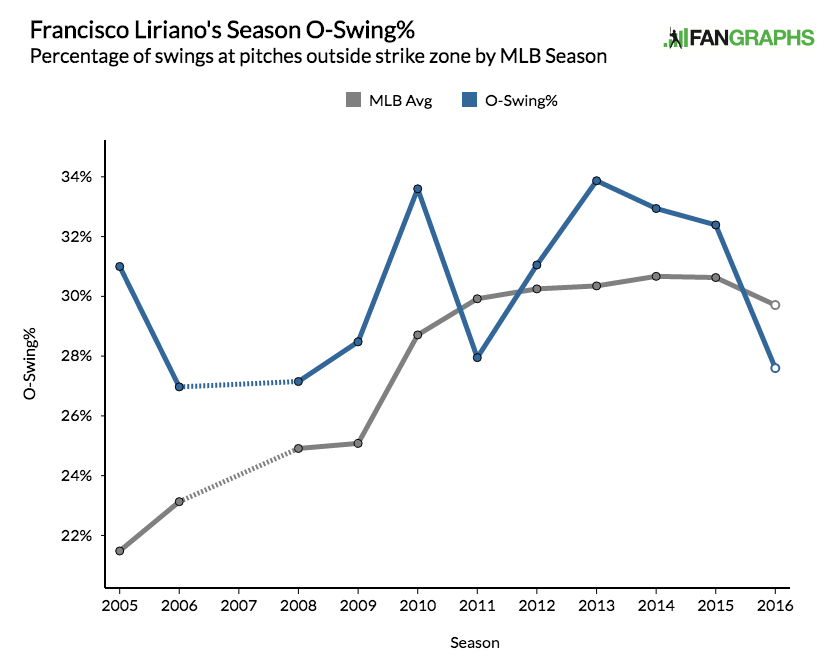 Batters are chasing Liriano at a lower rate. 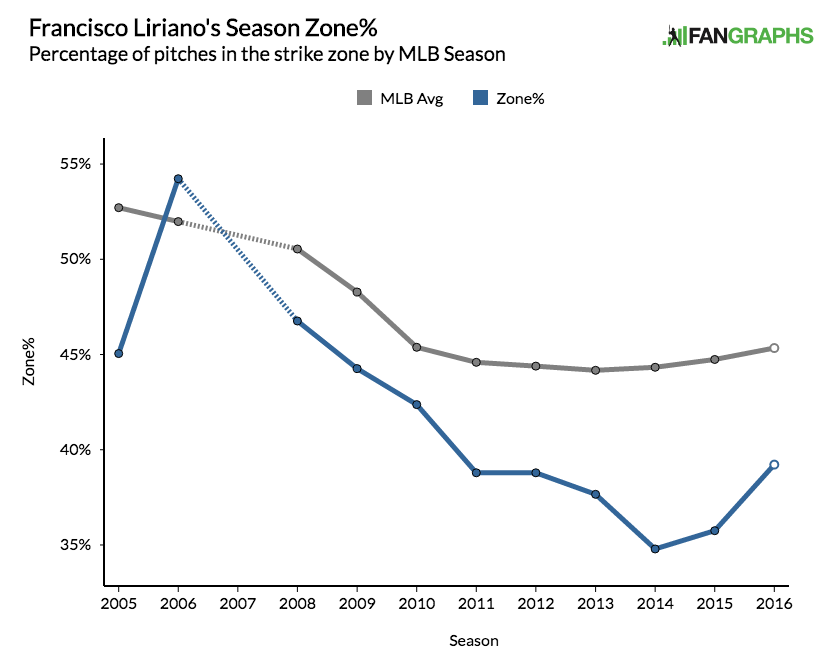 That explains the walks. Liriano continues to pound outside the zone but hitters are laying off. Interestingly, despite a league-low zone%, Liriano is putting the ball in the zone at the highest rate in his tenure with the Pirates. Something of a math equation begins to take shape. A lot of pitches out of the zone combined with more patient batters equals more players walking (again, 5.30/9), which means more baserunners. However, Liriano is actually living in the zone the most he has this decade, which suggests batters have a better chance to put quality hits against him. 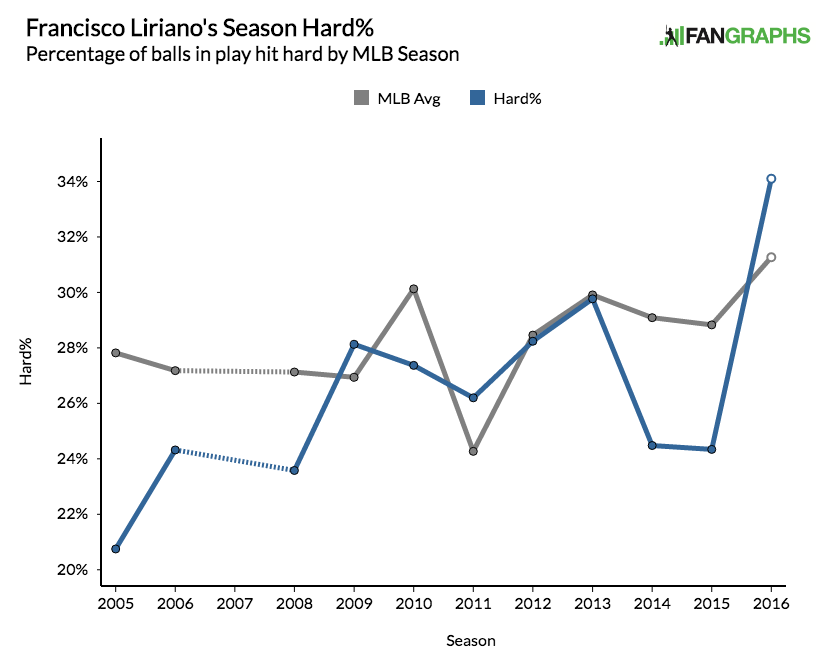 This season hitters are more patient with Liriano, chasing less and walking more, which necessitates his pitching more in the zone this season than at any other point this decade. So he's tossing inherently more hittable pitches and he's getting hit the hardest of his career.

At the same time, however, his velocity has not fallen off at all. He's still throwing his primary pitches hard. The Sinker is flying at an average 93mph and the Slider at 86, which is actually up almost 1mph from last season.
Pitch movement tells a marginally different story. The Sinker's vertical movement is roughly down 10% from last year, which is meaningful but it is still nasty. His Slider's horizontal movement is down 50% from last year, which, for him was a career high, and this year's decline puts it back in line with his career average. All that to say, Liriano's stuff has not fallen off a cliff in 2016.

Given that he's still throwing hard and with movement, and knowing what we now know about his pitch location, it seems likely that Francisco Liriano's disappointing 2016 season isn't a case of spilled secret sauce - it's because of market competition, shrewd batters. Luckily for the Pirates' ace his pitching coach is Ray Searage. Ten years into his career with an arm still producing and a league of hitters who seem to have finally caught wind of a dominant strategy ("don't swing"), it's time for Searage and Liriano to make use of their history together and employ a bit of game theory - veteran savvy, if you prefer.

The older pitchers get, the more their raw athletic ability declines, so to stay in the league they pitch smarter, craftier. Liriano hasn't lost his arm, though. What he does have is a decade of experience and a proven high quality coaching staff around him. If he can't get right who can? This is a matter of strategy not product quality. After demolishing the Brewers in his last start maybe the turnaround story has already begun.
I'm buying the 2016 Liriano dip.


***
Steven Demmler is a contributing writer at Beyond the Box Score. He can be found on Twitter at @sedemmler.