David Ortiz is having himself quite a farewell season

Big Papi is going out with a big year. A look at how David Ortiz remains one of the best hitters in the game.

Share All sharing options for: David Ortiz is having himself quite a farewell season

David Ortiz is having a magical last season in professional baseball, and it has given him a fun ride to the very end. With the Red Sox hosting the Twins this weekend at Fenway, the 40-year-old slugger took to The Players Tribune to post a heart-felt thank you to the Minnesota fans. The charming and honest anecdotes described by Ortiz put into perspective the long journey he has endured on his way to being a beloved Red Sox hero (a journey from a far-away land culturally that most Americans do not understand).

To this point, Ortiz's swan-song could not have been scripted better. He leads the league in wRC+ (180) and going into Friday night's action possessed a .330/.423/.673 slash line. He has already crushed 24 home runs and grabbed his 10th All-Star Game appearance.

How is Ortiz maintaining this level of productivity in his last season?  He's still the slow, lumbering, albeit powerful slugger of old, but he is producing significant value for Boston, the likes of which we have not seen in years. To date, Ortiz has already generated 3.3 WAR (per FanGraphs), and it's exceedingly likely he'll end the season having generated his most productive season since he amassed 6.3 fWAR in 2007.

Unsurprisingly, Ortiz's whiff rate in recent years had trended upwards. His career arc matched aging curves, and although he remained productive articles of his demise circulated through the Boston media more than once. This season, however, he has bucked this trend.

Per Brooks Baseball, so far this season Ortiz has swung and missed on all category of pitches (hard / soft / breaking) at his lowest rate since 2012: 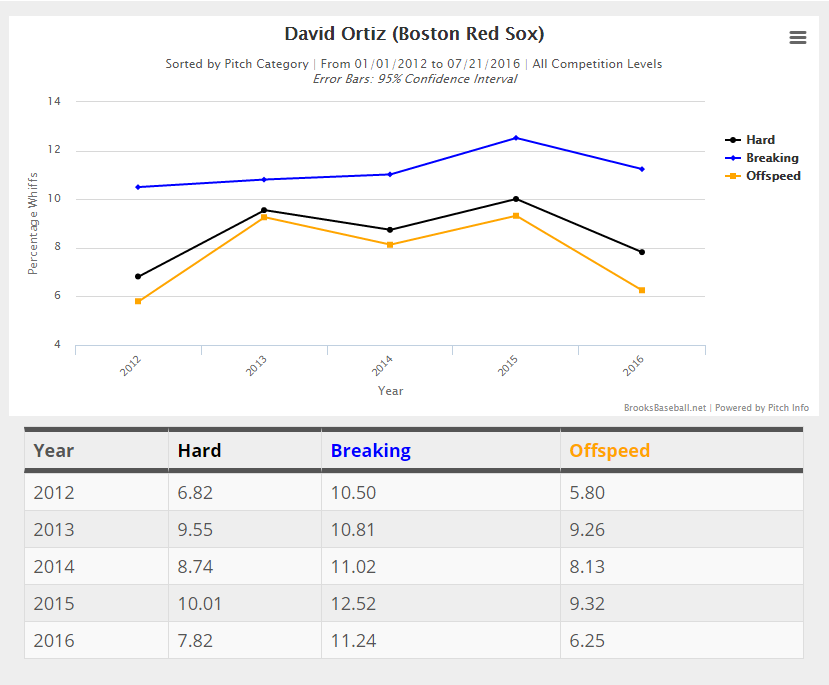 Combining the lack of whiffs with a slightly improved walk rate (14.0 percent this season compared to about a 12.5 percent average over the last few seasons) has yielded his best batting average, on base percentage, and wRC+ of his career.

Ortiz is truly going out on top, and it has been a really fun ride in Beantown. His expression of affection to the Twins organization and his clear affinity for Boston has helped make 2016 a really special year for Ortiz. The Red Sox are once again in first place, and it's certainly possible this wild ride can end on a duck boat come October.

Steven Martano is an Editor at Beyond the Box Score, a Contributing Prospect Writer for the Colorado Rockies at Purple Row, and a contributing writer for The Hardball Times. You can follow him on Twitter at @SMartano.

Editor's Note: New players win cash in their first league or get their entry fee refunded! Offered in partnership with FanDuel. Here's the link.