Jackie Bradley’s adjustments on offspeed pitches has created a formidable offensive force in a Red Sox lineup that already has some serious firepower.

Jackie Bradley Jr. made his debut with the Red Sox in 2013, when the team called him up for a ‘cup of coffee' in September. Bradley came through in the field (having been hailed as one of the better outfielders in the minors), but he failed and flailed his way through 100 plate appearances in which he put up a horrid slash line of .189/.280/.337.

It was much the same story in 2014, when the Sox put Bradley in the lineup almost daily (he played in 127 games), but his struggles at the plate remained the same. His average was in the same range, but his on base percentage and slugging actually were even worse than they had been previously --  .198/.265/.266.

After spending half the season in Triple-A, Bradley showed tremendous progress last year in his age-25 season. Through 74 games and 255 plate appearances, Bradley finished the season with a 121 wRC+, a .249/.335/.498 slash line and ten home runs. One of the major breakthroughs for Bradley is his ability to make contact more often than he had previously (and hard contact at that!).

Per the graph below, his whiff percentage has declined considerably since he came up in 2013, particularly against breaking balls and other offspeed offerings. While the whiff rate trended in the wrong direction from 2013 to 2015, it is trending in the right direction so far this season: 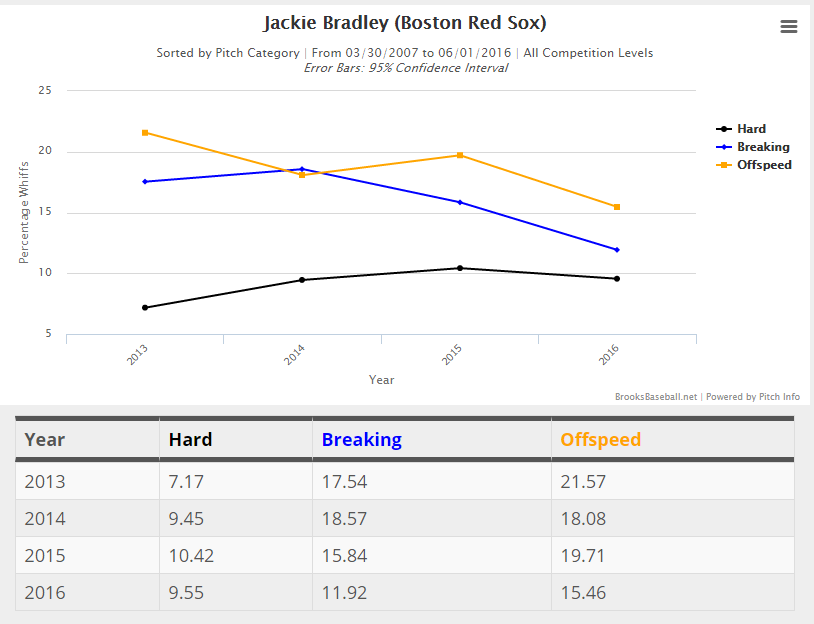 Interestingly, although Bradley is making more contact and swinging and missing fewer times, his swing percentage has actually increased against offspeed and breaking ball offerings.

Essenntially, Bradley has demonstrated improved recognition of breaking balls and changeups as well as a vast improvement in contact against those pitches. He has also shown above average power (23 extra base hits in 50 games) generated from an improved average exit velocity over 94 mph versus fastballs and over 92 mph against breaking balls.

Bradley's breakout is the direct results of identifying and in many cases pulverizing breaking balls and changeups. His 29-game hitting streak ended last week, but his success and improvement at the plate became a big story as he got halfway to Joe D's elusive 56. Regardless of the streak, Bradley's improvements should make him a more consistent and fun player to watch for years to come in Boston. Throw in his above average / plus fielding, and the Red Sox have the makings of  a perennial all-star.

Steven Martano is an Editor at Beyond the Box Score, a Contributing Prospect Writer for the Colorado Rockies at Purple Row, and a contributing writer for The Hardball Times. You can follow him on Twitter at @SMartano.

Editor's Note: New players win cash in their first league or get their entry fee refunded! Offered in partnership with FanDuel. Here's the link.