Adrian Beltre is an ageless wonder

The Rangers deal with Adrian Beltre is a win for both parties considering how the ageless third base veteran continues to produce. A look at the extension and the consistent positive impact of Beltre in the Rangers’ lineup.

Share All sharing options for: Adrian Beltre is an ageless wonder

The Rangers inked All-Star third baseman Adrian Beltre to a two-year extension totaling $36 million. Procuring a veteran's service for an average annual value of $18 million for ages 38 and 39 seasons is usually not the best idea; however, Beltre is an exceptional player whose consistency puts him in a class of his own.

Last season Beltre posted a 4.6 fWAR, his first season under five wins since his last year with 2009 Mariners -- a year in which injuries slowed him down and he played in only 111 games. Beltre reset his value and his career in his one-year stint with the Red Sox. Boston signed Beltre to a one-and-done contract in which the then-31-year-old posted a 6.4 fWAR, the highest value of his career since his last season in Los Angeles six seasons earlier.

Since his career re-set in Beantown, Beltre has amassed nearly 30 wins (per FanGraphs) and posted an OPS 33 percent higher than league average. Combined with excellent defense (though it's been lower than his career highs most of the last five years) it's no wonder Beltre topped my list of one of the best free agent values in baseball. Through the original contract with Texas, the Rangers paid Beltre less than $3 million per Win -------an unheard-of value for a superstar.

So what should the Rangers expect with this next contract?  Beltre's aging curve is hardly typical, and his late-career renaissance has put him on a path propelling him towards the Hall of Fame: 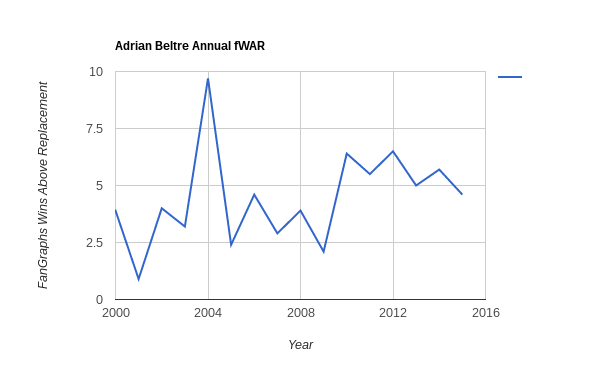 Beltre's skillset is such that he has aged gracefully. Although never one for an exceedingly high base on balls rate (his career walk percentage is only 6.8 percent) Beltre has an exceptional hit tool and has an average that has hovered in the high .290s up to the mid .320s since his 2010 reset year. He was an exceptional defender who has slowed a bit with age, but he still remains a positive in the field. Last season was his highest FanGraphs' DEF (defensive metric) since his last year with the Mariners.

To date, Beltre has posted a 1.1 fWAR this season through 22 games, a torrid pace that will likely slow down, but there's a very good chance he finishes the year in the 4-5 win range -- not too shabby. With Wins going for somewhere between seven and eight million dolars apiece on the free agency market, the re-signing of Beltre makes sense for the Rangers and for Beltre.

Ed's Note: Adrian Beltre's carer high in fWAR was in 2004 with the Dodgers, not in his one year with the Red Sox as a previous edition stated.

Steven Martano is an Editor at Beyond the Box Score, a Contributing Prospect Writer for the Colorado Rockies at Purple Row, and a contributing writer for The Hardball Times. You can follow him on Twitter at @SMartano