The Boston outfielder might not be walking much in his young career, but he still has elite control of the strikezone, and it's what has enabled him to make the most of his slight build.

Share All sharing options for: Mookie Betts still has a great eye

Boston has nothing to complain about with current outfielder/former infielder Mookie Betts. He's a five-tool player who adds value at the plate, in the field, and on the basepaths. He's only 23, and in 2015, he was the 23rd-best player by fWAR and the 17th-best by WARP. He shows no signs of slowing down in 2016, either, with a 134 wRC+/.274 TAv through his first 75 PAs. It's obvious that he's really good and likely to be part of the Red Sox lineup for years to come.

So, no complaining about Mookie. If you were going to complain about something, however – not that I am! – you might pick his walk rate. Coming up through the minors, Betts's control of the strike zone was a major selling point. His 2014 Baseball Prospectus player comment cites "his eye and approach" with approval, and his 2015 comment speaks of Betts having "maintained his patient approach in the majors", but after his 213 PAs in 2014 with a 9.9% walk rate, he's had a 6.7 percent walk rate over 734 plate appearances in 2015 and the early part of 2016. It hasn't gone totally unnoticed – in a recent FanGraphs chat hosted by distinguished baseball writer Eno Sarris, a commenter referred to his "hideous BB/K ratio" – but it hasn't really been a cause for concern, due to the aforementioned reasons of him still being an exceptional player. Still, it's been somewhat puzzling.

A close look at the data, however, reveals that his control of the strikezone hasn't disappeared, and in fact is a large part of his surprising success at the major-league level. It might not be manifesting itself in the form of walks at this stage in his career, but it's the reason he's able to thrive as an offensive player. 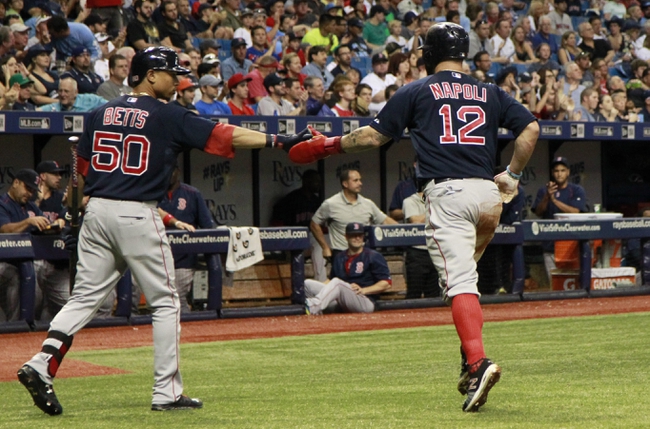 Betts doesn't arrive at his power in the same way as many larger players. Taking the 6'2", 240-pound Puig as an example, here's a comparison of their slugging percentages broken down by parts of the strike zone, from Brooks Baseball.

Puig has excellent zone coverage, with the ability to drive nearly any strike. Betts, on the other hand, has a specific type of pitch he can drive – inside pitches, even those that are off the plate. Any strike to Puig has a good chance of getting hit for some power, but the same isn't true for Betts; pitchers can throw certain strikes to him without too much fear.

Given their different capabilities, it seems obvious that different approaches would be required for them to arrive at roughly same overall offensive outcomes (as measured by ISO), and indeed, that's the case. Over the last three seasons, Betts has the fifth-lowest swing rate at pitches in the zone among the 210 players with at least 800 PAs, at 55.1 percent, while Puig has the 13th highest, at 76.0 percent. The difference is especially striking when broken down by part of the zone:

Ignore the colors as best as you can, since those are given relative to the player himself, and so bright red doesn't mean the same thing in both charts. What you see with Puig is relatively constant high rates of swings at pitches inside the zone. This makes a lot of intuitive sense; a pitch in the zone is a strike if not swung at, and as shown above, Puig can apply power to basically any of those pitches, so he should nearly always swing. For Betts, the swing rates are lower across the board – his highest in-zone swing rate is two percentage points lower than Puig's lowest – but also more focused on the inside half, where he can be more confident in his ability to hit a pitch with power.

For a player with Betts's physical profile, being patient and (to use an old cliché) waiting for his pitch to hit means more than just waiting for a strike. Pitchers, as you might expect, do their best to take advantage of that; compare Puig's rate of pitches seen in different parts of the zone to Betts's.

Opposing pitchers demonstrate a healthy fear of Puig, avoiding the strikezone as much as possible, and aside from preferring to keep their pitches low, demonstrating nearly no preferences inside it. When facing Betts, however, they target the outer half of the plate aggressively, the area where he's demonstrated a decreased ability to drive the ball and a willingness to let them go by for strikes. As a result, Betts gets a lot of called strikes, and a lot of deep counts. Nearly a quarter of the pitches he saw in 2015 (24.0 percent) were called strikes, the 7th highest rate in the league among the 301 players who saw at least 1,000 pitches. Puig's rate was less than half of Betts's (10.2 percent) and the 8th lowest in the league. Betts also had a high rate of pitches per plate appearance (4.03), good for 50th among the 268 batters with at least 300 PAs. More pitches seen is generally a good predictor of walk rate, but Betts has underperfomed his predicted walk rate (using a simple linear regression) by the 30th-highest amount.

What all this shows is that Betts is no less patient than he was in the minors, but that patience is manifesting itself in a different way. At this point in his career, opposing pitchers understand his physical limitations, and the confinement of his power to the inner part of the plate, and so unlike other patient hitters, Betts isn't forcing pitchers to choose between throwing him a ball or risk being taken deep. Instead, he's waiting for a mistake, a pitch that bleeds too far into his limited area of power that he can rip down the left field line. It's a different type of patience, but it's one way a player who looks like Betts can become a real power threat.

If he were to somehow unlock power over the outer half of the plate, it's likely Betts' walk rates would rebound to their minor league levels, and he'd become a true offensive terror. He doesn't need to, however, because he's using his elite bat speed and pitch recognition to leverage his limited physical tools into surprising amounts of power. Betts isn't walking, but he's as patient as ever, and it's still paying off in a real way.