No player has ‘splashed down’ in AT&T Park’s McCovey Cove since Brandon Belt did it in September of 2014.

Share All sharing options for: San Francisco's splashdown drought could end this year

AT&T Park in the heart of San Francisco is a charming and unique baseball stadium with its own personality and quirks. One of the most fun aspects is McCovey's Cove, a portion of the bay that is over the right field wall where fans can stand waiting anxiously for a home run ball to splash into the water. The uniqueness of hitting a home run into a bay of kayakers is chronicled on the Giants' website.

Since the park opened in 2000, there have been only 104 home runs that have splashed down. The hits have not been evenly distributed however, as Barry Bonds owns nearly a third of those homers (34 to be exact). As baseball adjusted to a less, ahem, powerful group of players, the splash downs have decreased.

No Giants player has blasted a home run into the water since Brandon Belt did it on September 25, 2014 and no other player has done it since Bryce Harper launched one in the 2014 playoffs. Likewise, Brandon Crawford is no stranger to a McCovey Cove splashdown, as he's done it twice in his career.

The difficulty is not the 309-foot right field dimension but the 24-foot high wall and often howling wind coming in toward the field. Considering the honor is reserved for lefties only (no right-handed hitter has ever done it), it makes it that much less likely (for a scientific explanation on what it takes to launch a home run into the Cove, check out David Kagan's piece at The Hardball Times).

Belt is certainly one of the top candidates to do it again, but there are a number of left-handed power hitters who will be traveling through San Francisco this season, including unlikely candidates such as Chris Davis and David Ortiz, whose teams rarely play interleague games in the Bay Area.

Brandon Crawford and Brandon Belt have both hit home runs into McCovey's Cove, and considering they play half their games there, they could do it again. With them included, the following is a full list of every left-handed hitter who hit at least 25 home runs in 2015 and will play in San Francisco in 2016:

Carlos Gonzalez pulls most of his home runs and should have ten games at AT&T Park to launch one into the bay. 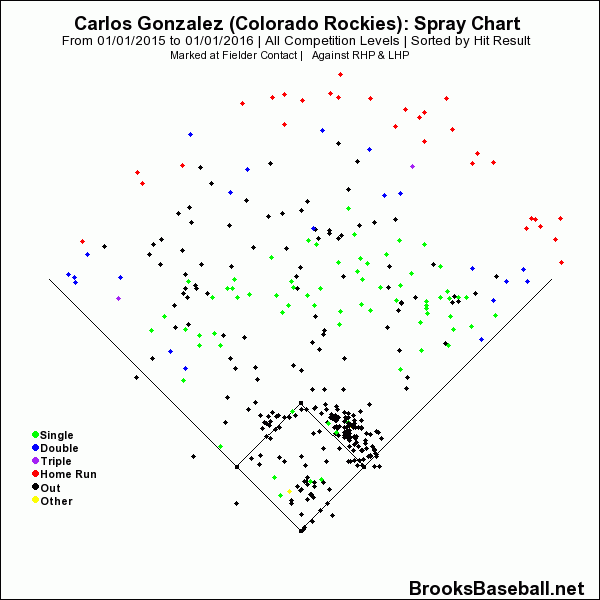 Adrian Gonzalez is in a similar situation, as the Dodgers will be up in San Francisco for ten games over the course of the year as well. Joc Pederson makes our list of left-handed hitters who slugged 25 home runs, but interestingly, he sprays his home runs, mainly in right-center and center field.

The rest of the players on this list visit San Fran for only one series. Bryce Harper and Curtis Granderson already have their names on the ‘splashdown' list and will have a series to do it again.

Red Sox slugger David Ortiz will have two games to add to his ‘splashdown' legacy (he hit one into the bay in 2010 when Boston visited San Francisco). Meanwhile, splashdown silver-medalist Pablo Sandoval will have another shot to add to his total of splash hits. While manning third base for the Giants, the switch-hitting slugger powered seven home runs into the Bay, although if he has a year like he had in 2015, his chances seem rather slim (ouch).

Matt Carpenter and Lucas Duda have four opportunities this season to put one into the Cove for the first time, while Chris Davis, Anthony Rizzo, Jay Bruce, and Joey Votto will have only three games to do it.

It is impossible to figure out who will be the next players to hit a homer into the Cove, but it would be surprising if the player was not on this list. Either way, these should be some fun (and unusual) matchups, especially considering the American League teams visiting AT&T Park.

Steven Martano is an Editor at Beyond the Box Score, a Prospect Writer for the Colorado Rockies at Purple Row, and a Contributor to The Hardball Times. You can follow him on Twitter at @SMartano.