Black holes: The terrible positions of the past decade

Seeking patterns in which positions have most often been actively bad over the last ten years.

Share All sharing options for: Black holes: The terrible positions of the past decade

It's so close. It's so, so close. Opening Day will be single-digit days away as of this Friday, and not a moment too soon. Spring Training is like popcorn to a starving person, and I can't wait to put it behind. Rosters are nearly final; barring the four or five Dodgers that will presumably be injured in the next week, everything looks basically how it will for the beginning of the season.

That means we can start to talk about team-wide projections with a little bit more certainty, as evinced by Baseball Prospectus's unveiling of their playoff odds and FanGraphs' ongoing Positional Power Rankings. The latter can be deeply depressing, as positions frequently have a team that is planning to give 700 PAs to some combination of lint and a porcelain garden gnome. In August Fagerstrom's power rankings for fist basemen from Monday, for example, he was forced to consider the Phillies, who will be staffing the position with the woeful Ryan Howard, Darin Ruf, and Cody Asche. If that doesn't frighten and/or upset you, I don't know what will.

As I'm writing this, only the rankings for catchers, first basemen, and second basemen have been published, but what I've noticed is that the 30th-ranked projected catching situation is roughly equivalent to the 21st-ranked first base situation, and that the 30th-ranked second base situation is roughly equivalent to the 28th-ranked first base situation. This makes some intuitive sense; at a position where fielding ability carries a lot of weight, it seems like it should be harder for a player to be absolutely useless. On the other hand, the whole concept of replacement level says that a replacement level player, worth exactly 0 WAR over the course of a season, should be equally easy to find at any position. That inter-positional equivalence is one of the backbones of the defensive spectrum and, in turn, WAR.

With that in mind, I wanted to put my intuition to the test. I took each team's performance at each position (not split into individual players) over each of the last ten seasons, 2006–2015, and identified all seasons worth less than 0.5 WAR. The idea is to look for patterns and see what conclusions can be drawn from whatever may exist. First, some fun facts, because I need some relief from the cavalcade of depression that is looking at all the terrible, terrible performances of the last ten years.

- The single worst position-team-season in the bunch is the 2008 Orioles SS, worth an incredible -4.0 WAR. Let that sink in. Swish that around in your consciousness, like a sip of wine, except the wine tastes like burnt trash. That's the equivalent of replacing 2015 Miguel Cabrera with 2015 Jean Segura, or 2003 Derek Jeter with 2014 Derek Jeter. It's so bad. The position in question was staffed by a full six players, none of whom got above 200 PA, so the blame can at least be spread around. The "primary" one, in that he had the most PA, was Juan Castro, owner of a lifetime 52 wRC+ and -6.1 WAR. Also appearing were Freddie Bynum, Alex Cintron, Brandon Fahey, Luis Hernandez, and Elder Torres. For three of them, this would be their last glimpse of the majors. They all were godawful, every last one, which is how you get a season total of -4.0 WAR.

- The unfortunate team with the most qualifying position-seasons over all ten years is the White Sox, with a whopping 32. Just to be clear, that's an average of over three positions each season worth less than 0.5 WAR. They've also hit every position at least twice, and 2007, 2011, and 2015 each featured five qualifying positions. Incidentally, this brings up an important point, as the White Sox were better than several teams last year despite having the most useless positions. This is definitely correlated with team success, but it's an aesthetic measure first and foremost.

- The team-season with the most terrible players belonged not to the White Sox, however, but to the Marlins. (Who else?) In 2013, Florida ran out Adeiny Hechavarria for nearly 600 PAs, but lest you get the wrong idea, this was before he could hit or field, apparently, as he ended the year with a 54 wRC+ and cost the team nine runs in the field. Rob Brantly and Jeff Mathis split catching duties, with cameos from Koyie Hill and Miguel Olivo, and none of them posted a positive WAR. Catchers get a really generous positional adjustment, so you have to hit really poorly to be worth negative WAR as a catcher. They all did! A bunch of people played first base, including Casey Kotchman, who went 0-for-20 with one walk. This was Placido Polanco's last season in the majors, and while he had a solid, long career, he could've hung up the spikes a year earlier and no one would have complained. Only two of eight Marlins positions – 25%, for the mathematically challenged – were worth more than a rounding error of WAR. I have never met a Marlins fan in real life, so I don't know whether any exist or not, but if and when I do meet one, I plan on giving them a hug. These facts, it turns out, are actually not the slightest bit fun, so we move on. 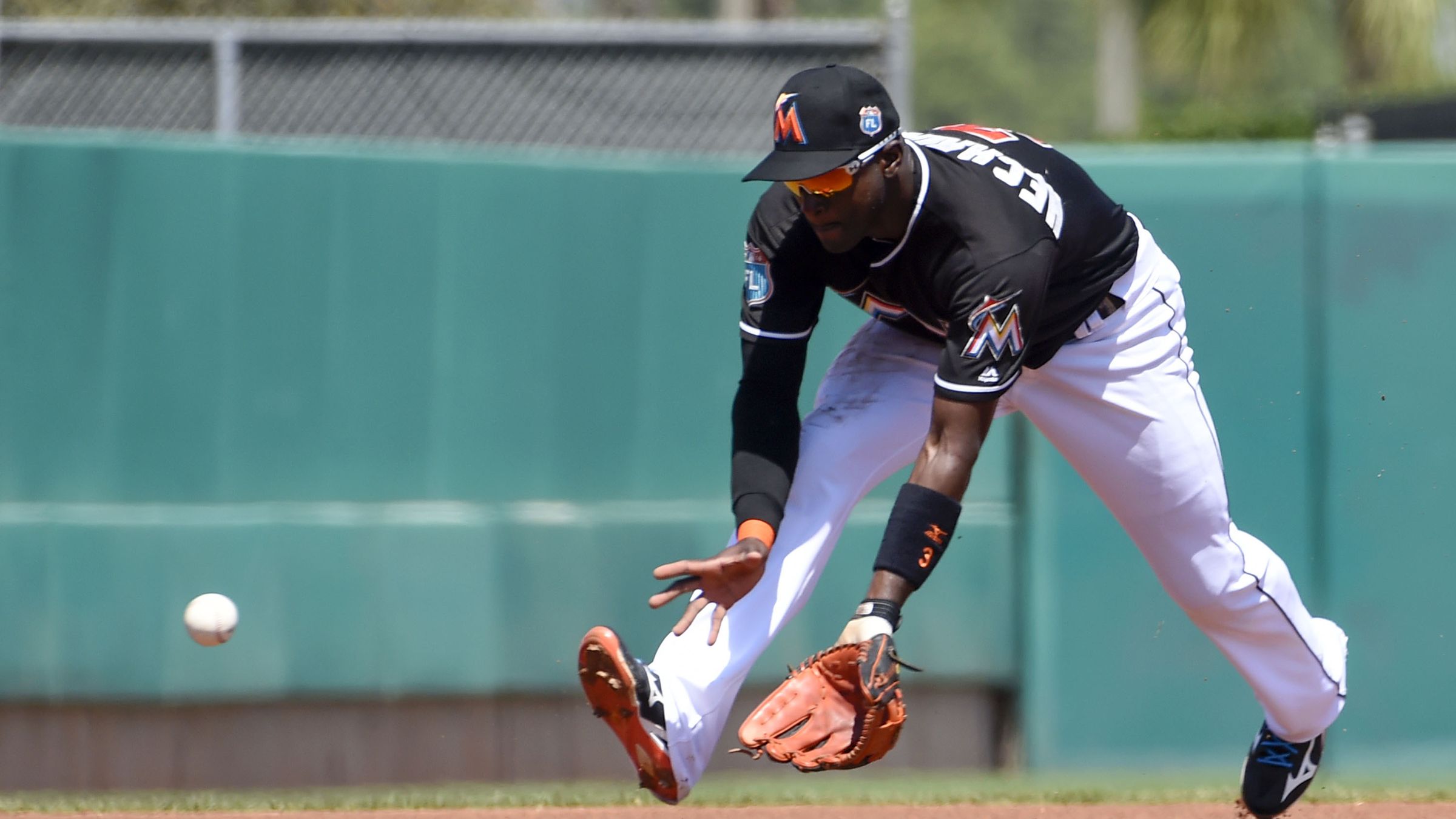 This guy played shortstop, but without any of the skills that make him good. Photo credit: Scott Rovak-USA TODAY Sports

Here's the graph of the number of terrible seasons at each position.

From center field, at 29 (or an average of three leaguewide each season) to first base, at 73 (or about seven leaguewide each season), there's a serious differential here. You might also notice a general pattern that more difficult defensive positions have had fewer awful seasons. Here's the same chart, with FanGraphs' positional adjustment added in purple (scaled so that 1B is at 0 and catcher is 25).

The big outlier is catcher, and I suspect that can be explained by the absence of framing in FanGraphs' WAR calculation. My guess is that some number of catcher seasons that seem "terrible" look more passable when framing data is included. If that's true, the number of terrible seasons would be almost perfectly inversely proportional to the defensive spectrum.

The question remains, however, of what to make of all this. One conclusion someone could hypothetically jump to is that the positional adjustment is too steep, punishing 1B/RF/LF too harshly and rewarding C/CF/3B/SS too much. Indeed, Jeff Zimmerman published some research about a year ago at the Hardball Times suggesting basically that, and proposing a narrower defensive spectrum (17 runs, rather than 30). While this might be evidence in favor of that contention, I wouldn't go so far as to equate the two, as this is obviously a much, much simpler measurement.

I'm more inclined to conclude this tells us something about what positions teams will allow to be terrible. Sam Miller, in his fourth accounting of what it means to have the best farm system in baseball, only used seasons with positive WAR totals in calculating a player's total contributions to a team. His rationale (as I understand it) is that a team that allows a player to continue playing while accumulating negative WAR has some ulterior motive beyond WAR, as the concept of replacement level dictates that they should have been able to pick up a WAR improvement for virtually no cost.

I think applying that framework to the above data is extremely illuminating. Why might a team continue to give a player PAs, despite being below replacement level? Perhaps they're an aging, well-respected player, and the team is deciding to forgo some value in exchange for good will, with the fans and in the clubhouse. That kind of player is likely going to be stashed somewhere low on the defensive spectrum, such as first base or a corner outfield spot.

Those positions are also where past GMs were most likely to overrate a certain kind of performance and give long-term contracts to players they probably shouldn't have. The aforementioned Ryan Howard is probably the quintessential example of this; these low-defensive-value, all-dingerz players who can decline so precipitously are almost never going to be shortstops or center fielders.

And, on a related note, this might have to do with what kind of performance at a position is perceived as tolerable by the average fan, not as familiar with WAR. You and I know that a first basemen who hits at a league average clip is probably not a good player, but the pressure to remove him from the lineup might be less than the pressure faced to remove a shortstop who hits worse than average, despite the former being less valuable. Defense is still undervalued in the eyes of the general public, and so decision makers prefer to run out a bad player at a position low on the defensive spectrum than an equally bad player at a more challenging position defensively, as the perception of the latter will be worse.

All that's speculative, though. I hope you didn't expect anything else. I think it's safe to say there's a real pattern in what positions are most likely to end up as awful, valueless chasms, and that it's related to the defensive spectrum, but why exactly will need to be answered by someone much smarter than me. For now, return to the depth charts, look forward to Opening Day, and hope you don't have reason to think too much about this question during the season.