Collin McHugh should not rely on his fastball early in games

Collin McHugh’s early inning problems may be the result of early over reliance on fastballs first time through the order.

Share All sharing options for: Collin McHugh should not rely on his fastball early in games

The Houston Astros currently sit in first place, one game ahead of the Angels in the American League West. The ‘stros front office has achieved its objective to put a competitive team on the field far quicker than most people thought. Much of their 2015 success can be credited to homegrown success stories like draftees Dallas Keuchel and Carlos Correa and international signee Jose Altuve. Collin McHugh is a key member of their rotation who is not a homegrown talent but has also been a key member of the Houston rotation for the past 18 months.

McHugh was drafted by the New York Mets in the 18th round of the 2008 draft and then shipped to Colorado for Eric Young in 2013. Then things got interesting. The Rockies DFA'd (designated for assignment) McHugh in December of 2013, after which he landed on the Astros as part of their 2014 rotation where he has been ever since.

His numbers are not elite, nor would anyone classify him as an ‘Ace', but McHugh has been a solid above-average pitcher for the better part of two years with Houston. For his career in an Astros uni (which are phenomenal by the way), McHugh has posted a 5.6 fWAR. This season, McHugh has a FIP and xFIP of 3.77 and 3.96, which is considerably higher than his 3.11 and 3.11 from last season but still around / slightly better than league average.

Over the course of the last two seasons, McHugh has been getting beat up more often early in games. The first time through the order seems to be the problem rather than the rest of the game. All three triple slash categories are higher the first time he faces his opponents in any given game, and his tOPS declines as the game progresses (tOPS normalizes OPS against for a specific split compared to the player's aggregate OPS against, 100 being equal to the pitcher's OPS against).

For those who are aware of the ‘times through the order penalty' the atypical nature of this table will come as a surprise. We can blame some of this on the high BABIP, but I suspect the BABIP is more of a symptom than a cause, as we're looking at a sample size of nearly two years of games started.

Pitcher's usually get worse as they face hitters more often in a game. It does not really matter if a pitcher is a ground ball or fly ball heavy pitcher. It seemingly defies logic that Collin McHugh would improve when batters see him multiple times in one game. Does McHugh gain velocity as the game continues? Do his pitches gain movement as he gets settled into a game? These are the questions inquiring minds want answered (or at least my inquiring mind!).

A deep dive into McHugh's Brooks Baseball page demonstrates that his velocity does not increase nor does movement positively change as a game progresses (as is shown in the charts below). McHugh's fastball hovers around 91 MPH through the entire game, with a complemented offspeed in the 88 MPH range for his slider and 74 MPH range for his curveball. These numbers do not materially change as the game progresses (sure a quarter / half MPH may be affected as the game wears on, but this is not noteworthy). 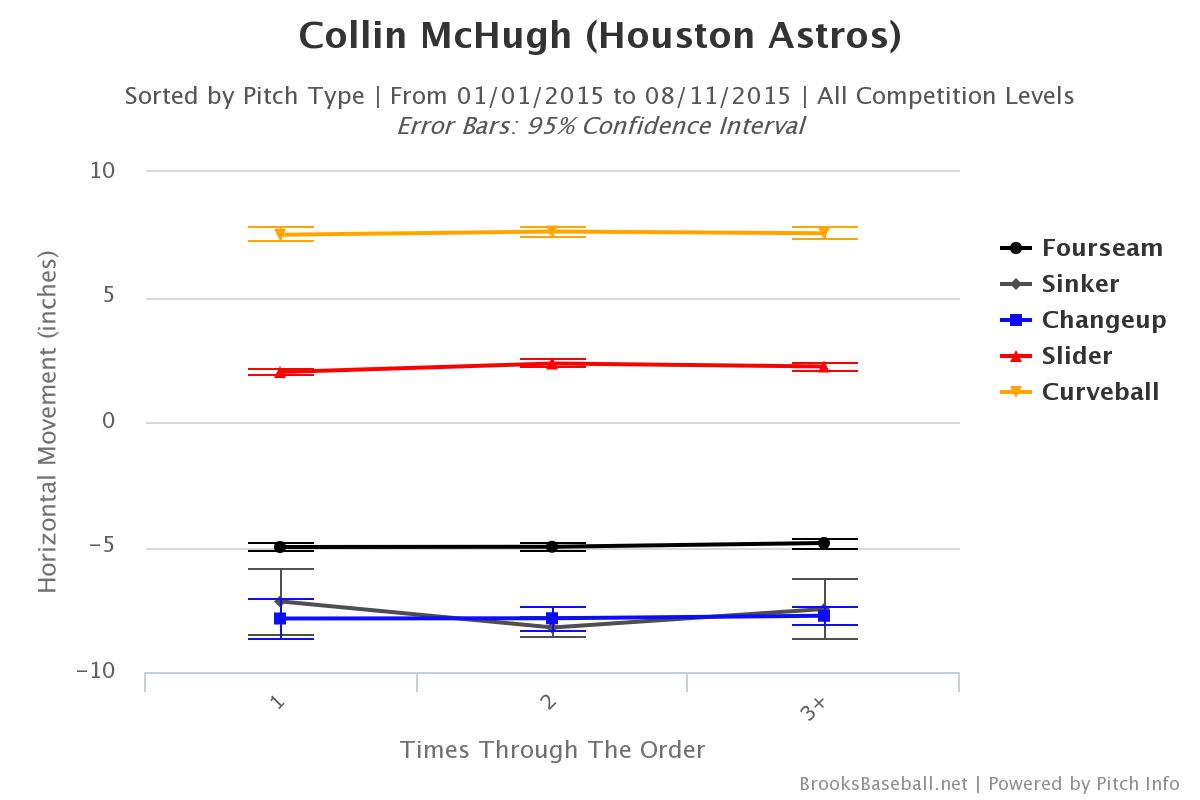 Neither his vertical nor horizontal movement on his pitches change as the game progresses, except for his sinker having less sink. He barely uses his sinker, so that's irrelevant.

This leaves us with the potential variable of pitch selection and usage changes for different times through the order. 2014 selections are the first chart with 2015 following. 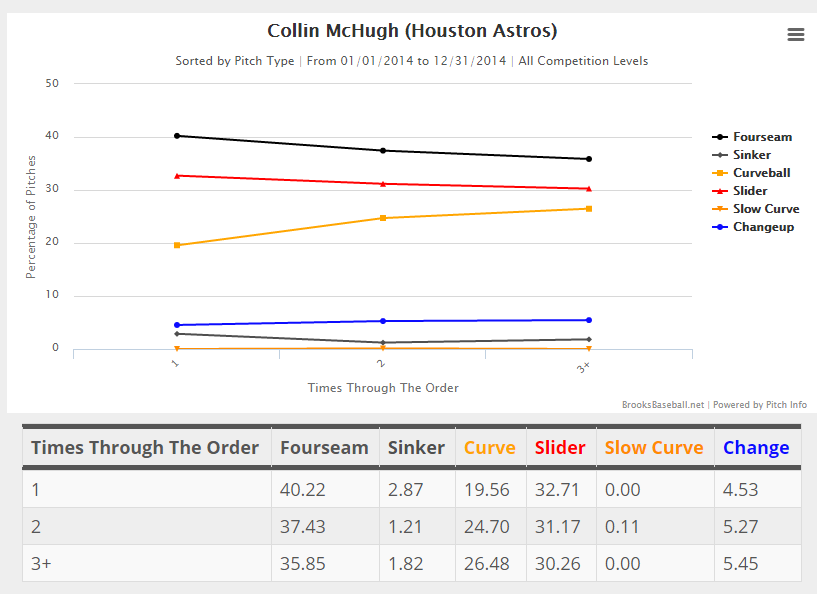 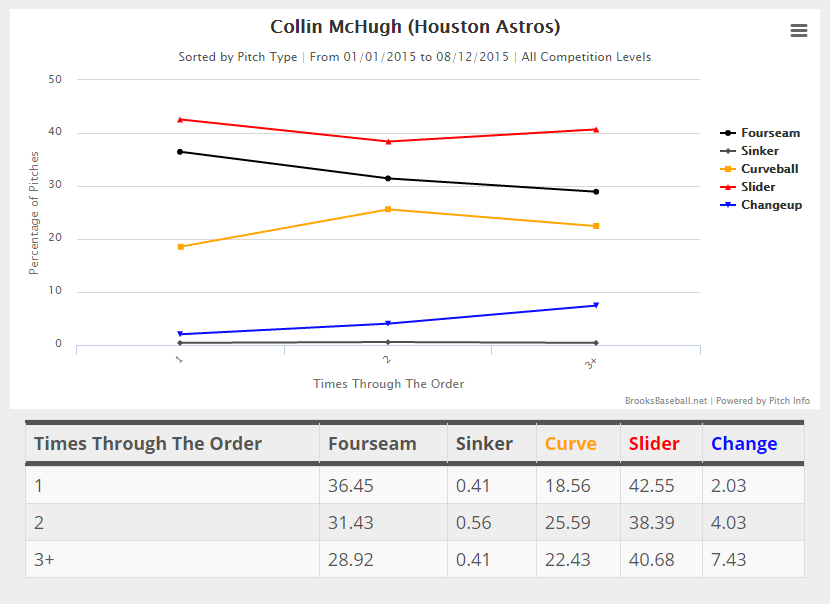 On the whole, McHugh relies on his offspeed a bit more than he had in 2014 (he's throwing the fastball 4 percent less of the time in general), but the interesting piece is how he has consistently and always lessened the use of the fastball as the game continues.

McHugh may seem to ‘settle in' as a game progresses, but it can possibly be his over-reliance on his fastball in the early innings that causes him to get hit so hard the first time through the order. His batting average on balls in play is highest at the beginning of the game (first time through the order and innings 1-3), which can possibly be attributed to hitters making better contact on his fastball, as they expect it more often in early at bats and end up with better numbers as a result.

As the game progresses, McHugh relies more on his offspeed (which he's been doing to some extent as a whole in 2015). If McHugh curbed his fastball usage a bit more in the earlier innings, he should be able to limit hard contact and limit the damage done in the first few innings of a game. McHugh has an FIP- and xFIP- that is better than average and right around average; if he were to fix his early game problems, he could become a formidable number two starter.