The New York Mets are currently enduring their worst offensive production in a decade. Taking a look at how they stack up against the NL and Mets teams of the past decade.

Share All sharing options for: The Mets outfield cannot hit

Unfortunately for New York Metropolitan fans, the team has become somewhat of a punchline based on the team's lackluster acquisitions (such as aged players past their prime like Curtis Granderson and Michael Cuddyer) and a reputation for having the stingiest ownership group in the majors. It is not a surprise to learn that the Mets offense has been lousy in 2015. Beyond the low runs scored per game and various comparisons to a putrid 1962 expansion franchise, the Mets are undergoing a organizational downturn at the plate, and the culprits are fairly easy to identify.

Overall, New York is holding their own in a mostly average National League East. The Braves are rebuilding, the Marlins are bad and the Phillies are worse. The Nationals are likely the only true-talent team that is better than the Mets, and DC currently sits atop the East by just a few games.

The Mets are within striking distance of a playoff spot for the first time since 2008 mostly because of a dominant pitching staff, but the ceiling for New York is derailed due to a lack of offensive production.

Analyzing the Mets offensive production position-by-position in comparison to the rest of the NL makes it quite easy to identify the gaps and holes that are preventing this team from hitting their stride and being a true contender for the division. Below is a graph comparing the production from all eight positions to the National League average by wRC+, and it is staggering how terrible some of the positions have been so far this year in comparison to National League peers. 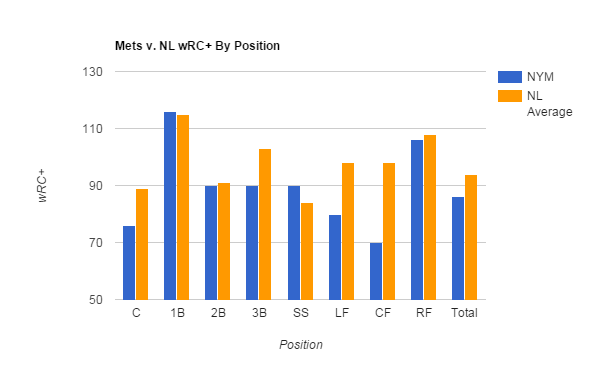 The prevailing narrative is that the Met's middle infielders are holding the team back both defensively and on the offensive side and that New York's talent gap at shortstop is a significant factor in the Mets taking the next step forward. As is often the case however, the truth is far more complex, and blaming shortstops is a bit of a ‘red herring'.

Middle infield is hardly the biggest problem for New York, particularly at the plate ---- and it is worth mentioning NY shortstops have a positive defensive value per FanGraphs). NY shortstops have actually hit slightly better than the National League average shortstop. The offensive issue is not up the middle, but rather in the outfield as the graph above clearly shows a disparity in center and left field.

Mets' center fielders have been a full 28 percent worse than the rest of the National League center fielders. Juan Lagares has logged the most innings manning center, and he currently has a slash line of .256/.282/.335 with only three home runs. A powerless outfielder who does not get on base at a 30 percent clip is simply not good enough for a team that expects to contend. Lagares does amass significant defensive value, but with a pitching staff that is top five in strikeouts in the National League, deferring any offensive aptitude is not a viable option; he would be better served as a defensive replacement than a starter.

Center is not the only anemic part of the Mets outfield, left field has been nearly as bad. Michael Cuddyer, the Mets big name offseason acquisition has logged 539 innings in left (~60 games) and has been awful. Unlike Lagares, Cuddyer doesn't even give the Mets defensive value and has a negative defensive metric per FanGraphs. He has a .250/.303/.380 slash line with eight home runs, good for only a 94 wRC+, 6 percent below total league average. Cuddyer is playing like a replacement player despite the fact he is making $8.5 million. For a team rumored (and has empirically shown) to be one of the cheapest in the majors, this is money horribly spent.

The woes in the outfield are undeniably the effects of misspending on Cuddyer and not having a competent long-term centerfielder whose defense could be supplemented by the defensive value of Lagares.

In addition to the lack of outfield production, the Mets are struggling mightily at catcher and third base, having lost two key members of the team to long-term injuries. Both David Wright and Travis d'Arnaud have missed significant time --- Wright has only played in only eight games this year and d'Arnaud has suited up for 19. New York's lack of depth at the hot corner and behind the dish has been greatly exposed, and at both positions, the National League has hit 13 percent better than the Mets have hit so far this season.

Over the course of the past decade, the Mets have rarely been an offensive powerhouse, and the team's offensive production has vacillated greatly since they last made the playoffs in 2006, when they were fairly close to league average compared to the rest of the NL. 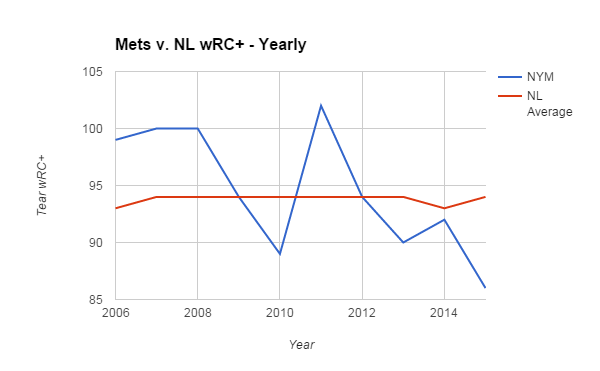 Offense spiked in 2011 but the team still finished 25 games out of first place with a 77-85 record. From 2006 to 2008 years, the last time New York was in contention (and subsequently blew September leads), the team's offense was six percent better than the rest of the National League. Since that high in 2011, the Mets have been struggling significantly and are eight percent lower than the National League average this season.

None of this is news to anyone who has seen the Mets play in 2015; the team struggles to score runs against good (and mediocre) pitching, and they have not been able to capitalize on a renaissance of young starters that includes Matt Harvey, Jacob deGrom, and Noah Syndergaard.

With the trade deadline looming, it seems fairly obvious that the Mets will not be making any significant moves due to the cost of acquiring impact players, and it may not be the worst thing considering all the offensive holes. Even if the Mets did become buyers, the issues are more complicated than adding just one or two pieces at high prices. Health and a lack of a strategic plan for outfield personnel has been their undoing. Mets fans can only hope the team rises above mediocrity while they still have excellent, young, cost-controlled starting pitchers.

Steven Martano is an Editor at Beyond the Box Score and a Contributing Prospect Writer for the Colorado Rockies at Purple Row. He gets very frustrated watching the Mets even though he has no rooting interest in them. You can follow him on Twitter at @SMartano.