The American League East is better than advertised

The American League East has a current reputation for being a lousy division, but it’s not as bad as you think, nor is it all that different from years past.

Share All sharing options for: The American League East is better than advertised

With more than half of the Major League Baseball season in the books, there are certainly some surprises at the top of divisions (such as the Astros) and there are some surprises in the basement (the preseason darling Boston Red Sox, for example).

Despite being cellar-dwellers for a good portion of the first half, the Red Sox are only a half dozen games behind the first place Yankees. The divisional standings as a whole are less than impressive, with the teams a collective 225-222, good for a .503 winning percentage.

The East had been viewed for many years as the toughest division in baseball, and with two of the highest payroll teams combined with what was a juggernaut front office Tampa Bay squad, the positioning made sense. However, this season the prevailing narrative has been that the division is a mediocre shell of its former self, likely to send only one team to the playoffs...the team that is the least crappy.

When diving into the numbers however, this narrative is not entirely fair. The American League East has always tracked the major league trends (this should not come as a surprise). I went back to 2010 and plotted out several statistics to get a flavor for how the aggregate AL East did compared to the other 25 teams as a whole.

I looked at weighted runs created, the best measurement of raw offensive run production, ERA- to get a measure for the runs that were given up, as well as fWAR for positional players and pitchers, breaking it down by AL East team, divisional aggregate, and the entire league as a whole.

What I found is that the American League East is not nearly as different as it's been purported. For the 2015 projections, I took the actual numbers for weighted runs created and wins above replacement and projected the remaining 44 percent of the season in order to be looking at comparative annual data.

Let's take a look at some fun charts and graphs; it's what we do here! 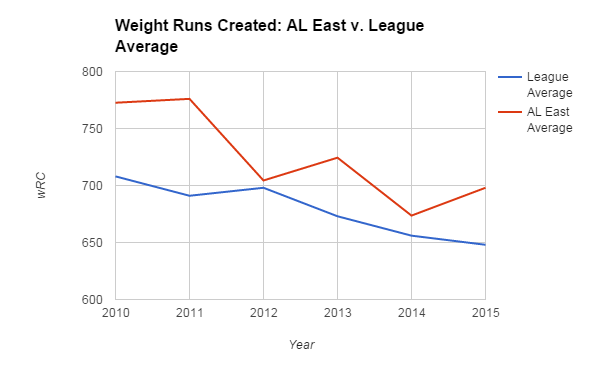 Based on weighted runs created, the AL East has always outperformed league average. The potent offenses of the Red Sox and Yankees in 2011 were a main reason for the disparity between the East and the rest of baseball. Although 2012 and 2014 were closer to league average than the odd numbered years, the AL East as an aggregate still outplayed the rest of the league from a weighted runs created perspective.

This season is projected to be much of the same, and in fact, the East is projected to have a comparatively better offense than the rest of the league than it did in 2014. Much of this difference is driven by the Blue Jays, who are projected to be 150 runs over the average MLB team. 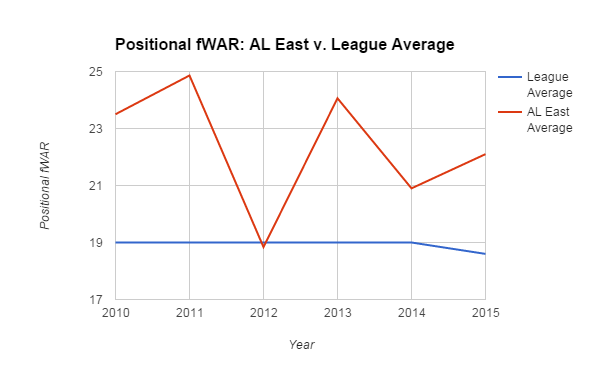 For positional player fWAR, the story for 2015 matches up similarly with previous seasons. The American League East teams are projected to amass more positional player fWAR than a league average team. In 2012, the Blue Jays offense was putrid, and the Red Sox were flirting with the Bobby Valentine experiment, yet no one claimed the division was not good. This season, the East is again projected to, in total, have more value than league average.

On the offensive side, things are not as dire in the East as one would expect after hearing all of the groaning related to how lousy the division seems to be. On the pitching side, it's a bit of a different story, but the East has not recently been a division that has relied on excellent pitching to win games. 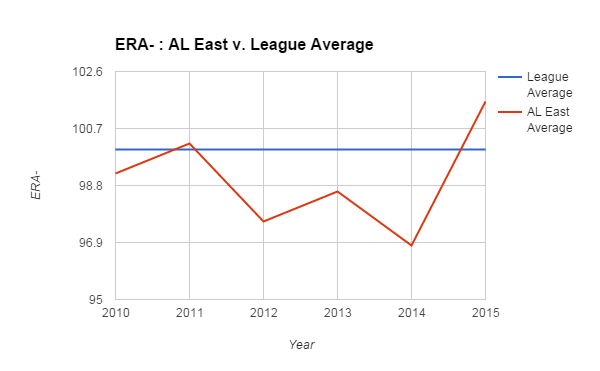 On an ERA- basis, the East certainly is struggling this year. Only two of the five teams have a better earned run average than league average, and even the two that are performing better than league average are not doing so at a strong clip. In the past five seasons, only 2011 shows the East as worse than the rest of the league. 2012 through 2014, the pitching for these five teams has been league average at worst (Blue Jays) and exceptional at best (Rays, Yankees, and the 2013 Red Sox). This season, Boston has tossed a miserable ERA, with the Blue Jays only modestly ahead of them.

The reason I chose ERA- is to demonstrate what has happened on the field thus far in 2015. Because when we peel back the onion and look at pitcher wins above replacement, the disparity is not that large. 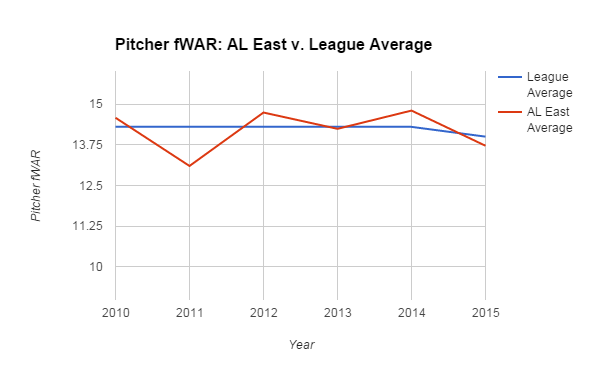 FanGraphs' pitcher wins above replacement uses FIP rather than ERA, and the difference is a stark one. Whereas in the ERA- graph, the league was significantly underperforming the AL East (i.e., had worse ERAs), when put into projected fWAR, the numbers are much closer together.

This graph is the most volatile of the four I've presented, and it is hardly the case that the American League East has the top pitchers in baseball. 2011 was the least valuable compared to league average in the past five years, and contrary to the current narrative, 2015 does not project to be as bad as it was previously. 2015 looks to be more aligned with 2013 than any other year, and the sentiment that the East was stumbling did not exist in 2013.

Despite the narrative that the team that wins this division will be the least worst of the bunch, a case can absolutely be made that the AL East winner is as deserving as any other, and is not simply the ‘less bad' of the five teams.

The American League East is alive and well, and although the teams are beating up on one another and have come out of the gate slower than expected, it would not be surprising to see one of these teams (perhaps two, we've seen crazier things) put together a strong second half and a legitimate postseason run. Before jumping on the bandwagon claiming the time of the powerhouse AL East is over, take a look at the numbers.