It's everyone's favorite time of the year: the time to celebrate the Kansas City Royals. ... Just kidding. It's time for us to vote on our version of the All-Star Game!

As you may have heard, the All-Star game is coming up pretty soon. You may not personally agree with the current All-Star starters -- I know I'm not looking forward to watching the Yosts play against the National League -- so allow us to provide you with an alternative!

Here at Beyond the Box Score, we try to decide on our own All-Stars each year. We use objective metrics and our own expert analysis of all things baseball to select our own All-Star team, and publish it so you can decide if we've come up with a worthy alternative.

Starting today, we'll roll out our selections -- with picks for National League and American League All-Star starters. Next week, we'll let you know who we picked as our reserves. And, so you can mock us for our choices, we'll provide a spreadsheet with all the votes of our staff, so you can understand who we considered.

So, without further ado -- here are our AL starters and the vote results!

This guy is extremely real. Sure, in saber metric circles he's still sometimes "The Guy That Screwed Mike Trout Out Of Two MVP Awards," but he's also one of the three best hitters of the last dozen years. Right now, he's the third-best hitter in baseball for the first half of the season -- his 188 wRC+ sits behind two BtBS NL All-Stars -- and he looks completely different than the injury-plagued shell of himself we saw for stretches over the past two seasons.

It seems like Cabrera has been around forever, but he's only playing his age-32 season and still has a bit of his prime left to go, we hope. Yes, the Tigers may have extended him a little too early, but he's the type of generational offense talent that's worthy of a slight over-extension. This probably won't be the last time he's an All-Star starter over the next five seasons. 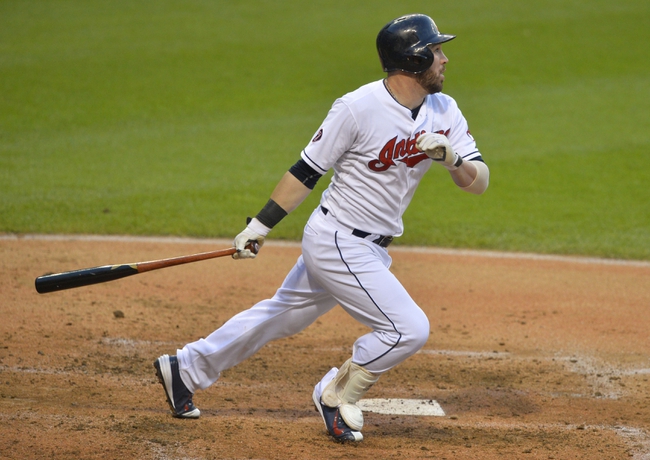 After a disappointing 2014, Kipnis had lost a little of the luster that made him a fan-favorite in Cleveland ... and among fantasy baseball players looking for offensive performance from the keystone. Today, Kipnis has recovered, and is currently in possession of the best FanGraphs Wins Above Replacement (fWAR) in the American League. How does he do it? Well, he gets on base a ton -- his OBP of .427 may be his most appealing trait right now -- but he also consistently adds plus value on the basepaths.

Cleveland may not be bursting out of the AL Central like some may have predicted, but Kipnis is shouldering more than his share of the load for this team. While we may not expect him to keep up his .357 batting average as the season goes on, he's already banked enough hits, runs, and doubles to make him a serious MVP candidate at the end of the year. 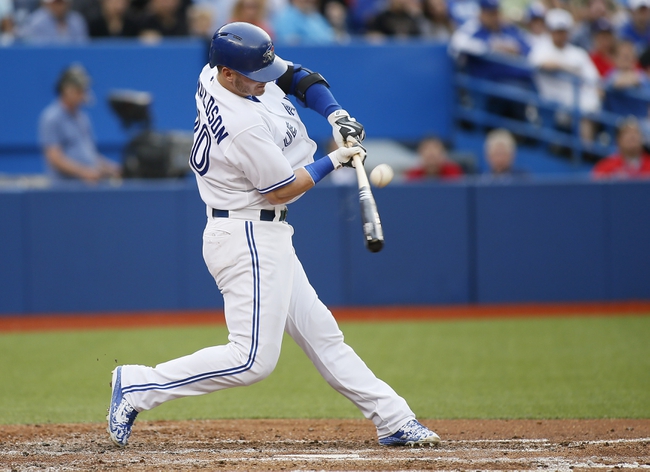 I'm going to need someone to explain this off-season's Josh Donaldson trade to me one more time. Donaldson, a true MVP candidate over two seasons in Oakland, was deal to the Blue Jays in order to save the Athletics a bit of money, and earn them many, many seasons of team-controlled talent. That much I get. But to have a power-hitting, defensively-elite third baseman holding your infield together -- that's a luxury you don't want to give up.

Today, the Blue Jays look like geniuses, as Donaldson is quietly putting together another elite season, this time in Canada. The 'Bringer of Rain' brought a downpour to the dome in Toronto, including 17 homers and a .530 slugging percentage. Offense -- and defense, let's not forget -- alone won't bring the Jays a championship, but having Donaldson in the fold sure helps. 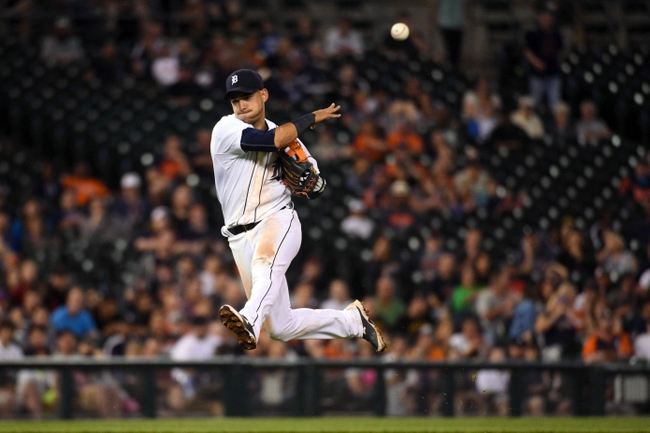 No starting position elicited a wider range of responses than the dreaded AL shortstop discussion. Last year, Erick Aybar took the lead and got the starting nod -- basically by default -- but this season there are at least a couple of players worthy of consideration. Seven, if you ask our staff, actually.

Somewhat surprisingly, defensive wunderkind Jose Iglesias takes the starting role, showing no signs of slowing down after double leg fractures caused him to miss 2014. Defense has always been Iglesias's calling card, but his offense is still improving over his breakout 2013 season. Sure, he'll never hit for power -- any power at all -- but he's raised his walk rate and lowered his strikeout rate his season, which puts him in an excellent position to succeed and anchor the Detroit defense.

The other players considered all have strengths as well as pretty serious flaws, with the exception of Carlos Correa. Correa simply didn't have the plate appearances to garner that ASG starting spot, I'd guess -- but he may put to rest the hemming and hawing we've done over the AL shortstop slot for, say, the next decade. 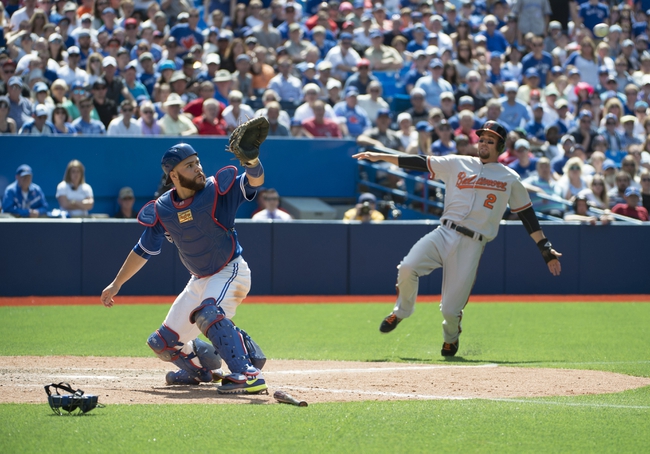 That hefty contract to bring the erstwhile Canadian north of the border seems worth it so far, right? Martin's always been known for his defense -- especially since the advent of pitch framing data -- but his offense this year may be just as impressive. Martin has an overall offensive profile 36 percent ahead of the league average, which is pretty awesome for anyone who wears the tools of ignorance. He's walking more than 10 percent of the time, and already has 11 dingers to his name.

Stephen Vogt is having a hell of a breakout season in Oakland, and was the only other catcher to garner (well-deserved) votes. The former Ray (and former afterthought) has just had an electric offensive season, but with all the onus being put on catcher defense these days, it's hard to compete with someone as polished as Martin. 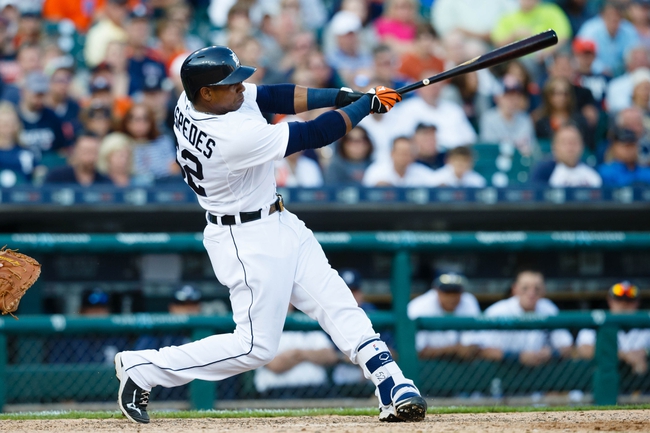 The third and final Tiger in our starting nine hasn't been a Tiger for long, but he's about as much fun as a baseball player can be. Yoenis Cespedes beat out Alex Gordon for the starting left field spot -- possibly due as much to Royals All-Star fatigue as much as Cespedes's copious skills.

Cespedes is, still, a very fine offensive player who plays everyday, and adds a little value in the outfield thanks to an unreal cannon of an arm. He may not be the benchmark middle-of-the-order hitter that his teammate Miguel Cabrera is, but he can sure make up for a middling on-base percentage by flashing plus power at all times.

Yo and the aforementioned Gordon are back-to-back on the fWAR leaderboards, with both having earned about 2.6 wins above replacement by FanGraphs' metric. Either would've been a fine choice here, but when in doubt, perhaps even our highly-analytical staff prefers power to defense. 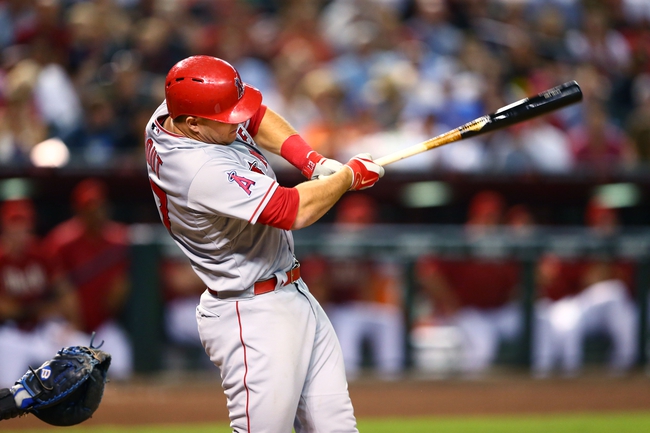 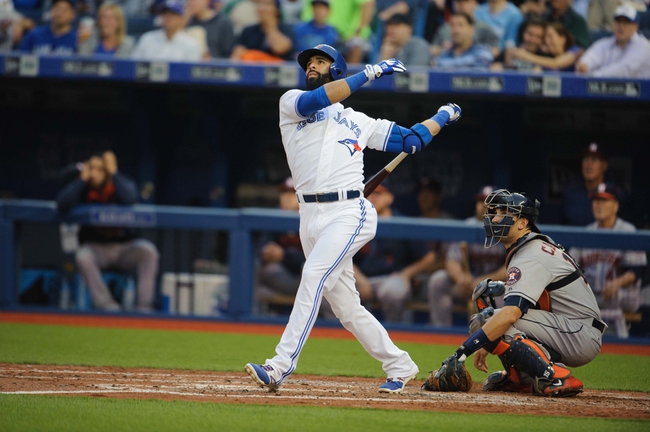 Five years after his unexpected breakout season, Joey Bats is still the prototypical slugging right fielder, and the class of the American League at his position. To this point in the season, Bautista has been suffering from low-BABIP disease, for which there is no cure except for time. Other than that, he's been the same old banger, hammering out 15 long-distance bombs and reaching base two of every five times at bat. 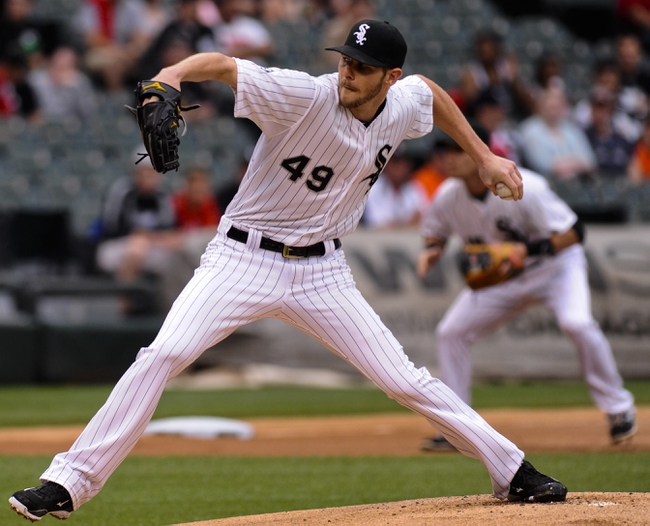 It's easy to forget about Chris Sale sometimes, because he pitches for the vanilla (and last place) Chicago White Sox. It's decidedly less easy to forget about Sale when you watch him pitch, and his unbelievable stuff makes batters look overmatched at best, and foolish at least. There are several phenomenal candidates for top pitcher in the American League this year, from Sale to Chris Archer to Corey Kluber -- but no one other than Sale is striking out 34 percent of batters faced, as a starter.

Sale's unlikely to lead his league in innings pitched, but he stands a decent chance of leading his league in strikeouts, FIP, cFIP, DRA, or any other rate pitching metric you can come up with. He's one of the best in the game now, bar none. This is his moment.

As you can see, Mr. Trout is the only uncontested choice among the American League starters, but Jason Kipnis was just one vote shy of a perfect score as well. There was also little debate on the merits of Miguel Cabrera and Josh Donaldson.

You can find the ballots for all of our staff voters here. Transparency is just the best.

Bonus item: I've created a potential starting lineup (optimized by The Book as best as I can) for this American League All-Star team.

Not bad, right? Any questions, comments, or complaints? Feel like we jobbed out your favorite Royal? Want to know more about our reasoning? Drop us a note in the comments, and let us know! And don't forget to check out or NL starters now, and the reserves next week!

Bryan Grosnick is the Lead Writer at Beyond the Box Score, and a columnist at Baseball Prospectus - Boston.