After years of searching, I think I've finally found the spiritual successor to sabermetric darling Ben Zobrist. It was not who I would have expected.

Share All sharing options for: We finally found the 'new Ben Zobrist!'

Among the subset of baseball fans that identifies as sabermetricians, I'm not sure that there's been a more popular player over the past decade than Ben Zobrist. More players have been identified as the "Next Ben Zobrist" or the "New Ben Zobrist" than you can shake a Louisville Slugger at ---- I'm not exempt and am guilty of this as well.

During Spring Training, I did my best to identify the next Ben Zobrist. I posited two names: Mookie Betts of the Red Sox and Arismendy Alcantara of the Cubs. Neither perfectly fit the Zobrist profile, but they were the closest I could find. Alcantara was my prize pick, but he barely had any effect on the Cubs' stellar recovery season. Heck, he didn't even resemble Ben Zobrist at Triple-A.

To be something like Ben Zobrist, a player needs to succeed in five key areas: versatility, defense, power, on base percentage, and overall value. I was wish-casting on Alcantara quite a bit as he hadn't shown a real solid measure of OBP, which would have been driven by batting average, not a solid approach. You have to imagine that Alcantara could be the player Zobrist is in so many of those categories -- the OBP and overall value especially -- but really cannot identify that he already IS that player. Alcantara not only didn't emerge in those categories, he tanked across the board. He was not very good, even in Iowa. Oops.

Mookie Betts, on the other hand, did a very nice job in almost all those regards ... his defense wasn't quite as good as expected, and Zobrist's signature skill, his versatility, was not displayed much at all. We have reason to think it might never be Betts because it's clear he seems entrenched as an outfielder. As much as the overall value is important, versatility is the carrying trait here and the one that makes Zobrist unique. In many ways, those two items probably should rate the highest, with the defense, OBP, and power sidling in as secondary qualities -- necessary, but not the driving factors.

As R.J. Anderson has rightfully pointed out on Twitter -- and as I tried to get at in my previous article -- the thing that most of the "next Zobrist" discussions seem to do is focus on the versatility and defense, rather than a perhaps more-important aspect: overall value. Zobrist was an MVP-caliber player for at least one season, and a no-doubt All-Star in several more. Being Ben Zobrist means being a star, even if the rest of the world doesn't see you that way.

No, the guy I've identified now is already seen as a star, just not as the new Ben Zobrist. So let's fix that. 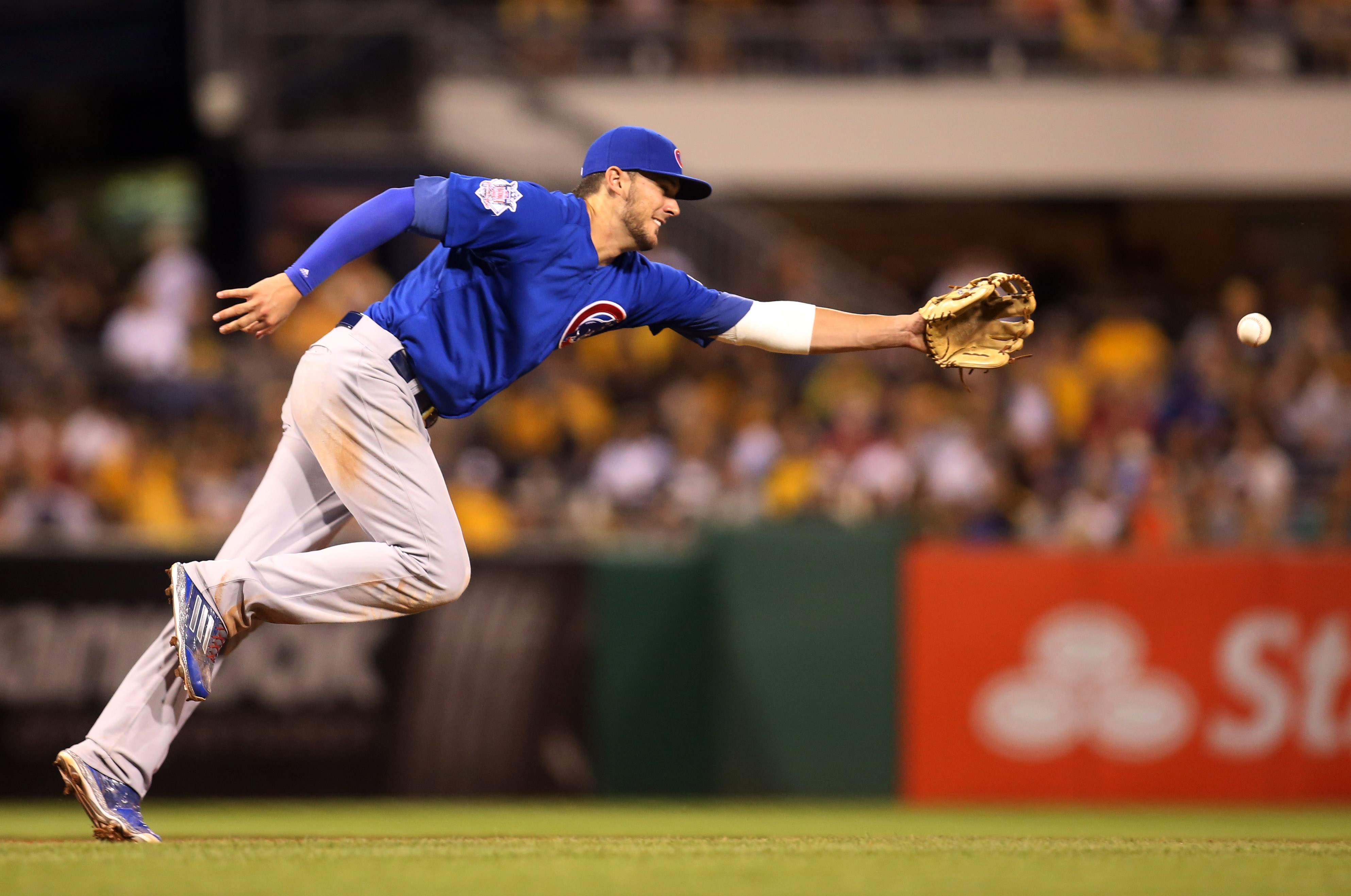 In 2015, Kris Bryant emerged to a heap of fanfare after truly dominating on offense through every phase of his (highly accelerated) minor-league career. After his well-publicized delay in reaching the big leagues, the Cubs promptly installed him at third base, a position for which he seemed too large to stay. Defense has always been a bit of an open question with Bryant, with scouts and pundits pondering whether or not the long third baseman might turn into a muscular outfielder.

[Note: On an aside, I don't believe size precludes a player from playing excellent third base defense, but this may just be a case of 6'4" guys sticking up for one another.]

Personally, I think Bryant's play at third base has been at least average, from what I've seen of his defense. His range is not great, but his actions around the bag and arm make him a solid regular. Of course, I'm not a scout, so my opinion should be taken with a grain of salt, but in any case, here's a nice play from the other night.

I wanted another opinion, so I reached out to Rian Watt of BP Wrigleyville, an excellent writer who covers the Cubs in detail. Here are his thoughts on how Bryant has grown at third.

Bryant started the season somewhat below-average at third, though with above-average arm strength and good instincts. Over the course of the season, his range, and ability to stay low, has improved significantly --though his height will always make it difficult to do so -- and his throws, which were shaky to start the year, have gotten to the point where they're actually good. I'd say at this point he's an above-average third baseman defensively, with the potential for further improvement and flashes of brilliance at times.

But the surprising thing, I think, is the other areas in which Bryant was deployed. In small bursts, Bryant played five positions this year: right field, left field, center field (!), and first base along with the hot corner. He even played four positions in a single game on September 28th. He started 11 games at these other four positions, which is no small feat. This demonstrates not only his personal versatility, but also his manager's willingness to use the player at multiple positions.

Here's Rian's take on Bryant's performance at the other positions he's played:

He's an above-average defensive left-fielder right now, though he's had some trouble adjusting his arm slot for the throws needed out there. His routes are solid and his range is good, because his top speed is really superb. Right field, I'm not so sure about; he'd need a short park for it to make sense with his current arm. Note that that's probably fixable with coaching, though; it's not a strength thing. First base, I suppose he could play passably, though he really hasn't had enough time out there to tell. Center field, he might actually end up playing full time next year, and I think he could be at least average. His first step might be a touch slow out there, but he's got the speed to make up for it.

Does it surprise you that it is Joe Maddon who deploys Bryant in several different areas? It shouldn't. As part of a conversation with Dan Turkenkopf, I came upon the idea that the Next Ben Zobrist might be required to also have the sage-like hipster Joe Maddon as his manager -- his team must be willing to use him in a utility role at times. Now, there's no question that Bryant doesn't have quite the same skill in terms of 'positionality' that Zobrist does -- there's been no time logged at second base or shortstop here. Zobrist came up as a shortstop, and could handle the position, while his bat allowed him to be a solid contributor even at an offense-first position like corner outfield.

And yet ... maybe the most important part of the player's versatility should be tied to the team's needs. Zobrist played all over the diamond in Tampa because the team lacked an impact talent at the positions in which he was deployed.

You never heard much about Zobrist filling in at third base, a position he almost certainly could have played, because Evan Longoria was already there mashing, but he could fill in at the team's areas of need, instead ... namely second, right field, and shortstop. On the same token, the Cubs need additional help in the middle infield the way I need another dog in my house: not at all. Addison Russell, Starlin Castro, and Javier Baez are the start of a logjam there, not even the whole thing. Bryant moving to get some time in the outfield gives the team the ability to deploy more talented infielders (or talented bats that they can masquerade as infielders), and give the team better overall options.

But could Kris Bryant play shortstop if he wanted to? I had to ask. To find out, I asked Rian about this too:

Maddon, who's a much better evaluator than I am, thinks he could do it. I believe him, but I have a hard time seeing it. You don't get a lot of 6'5" shortstops, and Bryant has consistently had difficultly staying low because of his height. He could make good use of range, but I don't see the fit there for more than a few innings at a time, in games where offense is necessary.

Well, if Joe Maddon thinks he can do it then ... maybe? I don't know. David Wright played shortstop for short bursts without looking like Hanley Ramirez in left field [Ed's Note: burn]. Baseball is weird, man.

The thing about Bryant is that he is, in some ways, underrated. He's been a almost kind of a disappointment offensively, based on the unbelievable hype that carried him into the start of the season. This is a guy expected to hit 40-50 homers from the jump, and instead he just hit a measly 26. His wRC+ only rates him as 36% better than the league -- a great number, but not the early-Braun expectations some had. Yes, he has OBP (.369) and power (SLG .488), but perhaps some thought he'd have more right away.

Look at some of the other things he's doing, and we see a player who contributes enough to meet the lofty expectations in terms of overall value. Bryant's baserunning (a skill Zobrist also possessed, but not at this level), earned him a stunning 7.1 runs above average according to FanGraphs's BsR metric ... that's almost a full win right there. His defensive measures, accounting for both positional adjustments and UZR, marked him as adding another 7.1 runs.

Good defense! Kris Bryant! His total fWAR was a remarkable 6.5 for his debut season, and bWAR (6.0) and WARP (6.0) corroborate the FanGraphs value determination.

So Kris Bryant hits all the buckets I want from my new Ben Zobrist. Overall value? Check, he's an All-Star-level player. Versatility? Check, even if it's not necessarily the same as Zobrist's. OBP, power, and defense? Check, check, and ... well, probably check. Bryant also supposedly has a similar makeup and demeanor as Zobrist, who has been lauded for his willingness to move around the diamond and his work ethic as well. Bryant even could still be considered underrated in regards to certain aspects of his performance.

When looking for the next Ben Zobrist, maybe we spent too much time looking for shortstops converted to other positions with a little pop? Maybe we should have been looking for stars with managers who don't worry about moving them around the diamond? Zobrist is still a bit unique -- there's likely never going to be a ballplayer exactly like him....but maybe instead of comparing Kris Bryant to a player like Ryan Braun or Giancarlo Stanton, just maybe, Zobrist is the better comparison?

[Note: Because great minds think alike, here's the case for Enrique Hernandez as the Next Ben Zobrist, published today as well by J.J. Jansons at Baseball Prospectus.]

Bryan Grosnick is the Lead Writer at Beyond the Box Score and a columnist at Baseball Prospectus - Boston. He believed in Nick Franklin, too. Oh, and big thanks to Rian Watt his insights. You can find more of his work at BP Wrigleyville.