The myth of September momentum

Some teams come into the playoffs red hot while others barely stumble into the postseason; demystifying the myth of momentum and postseason success.

Share All sharing options for: The myth of September momentum

Each team arrives at the postseason in a different way. The Royals clinched their division before any other team but have stumbled in September. Meanwhile the Astros looked primed for their first divisional title in fourteen years but have blown their divisional lead and may fall out of the playoff picture entirely.

The idea of momentum and playoff success is largely a myth. Take the 2006 Cardinals for example. With a winning percentage of only .516 (the lowest of any World Series participant in the last ten years). St. Louis went 3-7 in their last ten games, had a .429 September winning percentage, and then whipped through the playoffs for a World Series victory.

On the opposite end of the spectrum are the 2007 Rockies. Talk about momentum!  Colorado looked unstoppable in September, posting a 21-8 record (a .724 winning percentage). They went 9-1 in their last ten regular season games, and then swept the Phillies 3-0 in the NLDS, then the Diamondbacks 4-0 in the NLCS only to last four games in a row to the World Champion Red Sox. No team in the last ten years entered the World Series with as much momentum, though the 2011 Rangers entered the postseason on a tear as well.

The Rangers had a .593 winning percentage for the year, and posted a 19-6 September record. They made it to the World Series but ultimately lost to St. Louis.

Here's a look at the September (and in some cases a few games in October) winning percentages of the World Series teams: 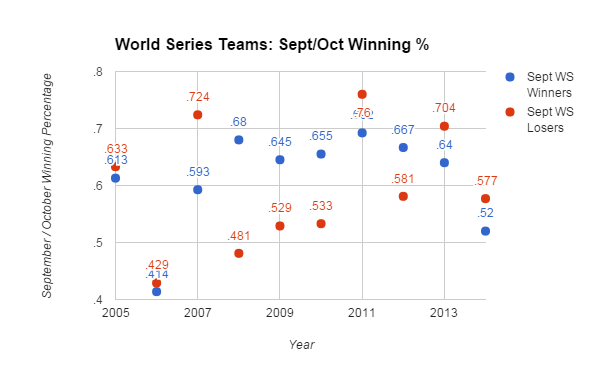 Let's take a look at this year's playoff participants (I included the Angels and the Astros, as the second American League wild card is still up for grabs): 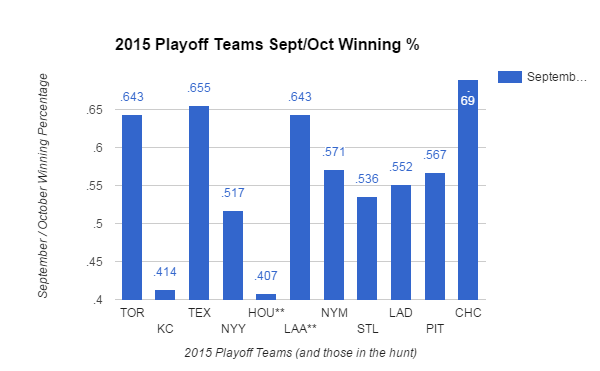 The Royals dominated for most of the year but have slowed down considerably; they are the worst performing division winner in September. On the contrary, the Angels have put the pressure on the Astros and the Rangers have overtaken both teams for the (likely) American League West title. The Cubs and Blue Jays have surged recently as well and both teams have secured their slot in the playoffs, though the Cubs have some work to do on the road against a PIrates team that has played well the last month.

The moral of the story here is that once you've punched your ticket to the postseason, whatever happened previously is largely irrelevant. Obviously teams want to avoid the wild card game, and home field is always a nice-to-have, but as far as performance, what has happened recently can be put in the rear-view mirror. For Astros fans, get into the October dance, and forget the last few weeks. Win the wild card game, and you have as good a chance as any to win the World Series.