Tampa Bay can be a contender in 2015. Their success lies in the hands of their young rotation.

Share All sharing options for: Tampa Bay's future lies in their starting three

For the first decade of their existence, the Rays were viewed as the American League East doormat, never winning more than 70 games in their first ten seasons. Joe Maddon and Andrew Friedman changed the roster, and equally as importantly, changed the culture in Tampa. Before their arrival, the Rays were a perennial loser, but have since created a franchise that has won at least 90 games five of the last seven years, including one World Series appearance.

Despite lofty expectations going into 2014, Tampa Bay never put it all together. The Rays finished in fourth place with a 77-85 record, and never strung together a winning streak to contend for a Wild Card. The team is currently at a crossroads, having recently dealt one of the most valuable players in the history of the franchise (Bryan Grosnick gives an excellent run-down of the Zobrist trade), but what remains to be seen is whether or not they can continue their winning ways. The Rays have a strong rotation as currently constructed, and their young arms will be keys to the future success of the franchise.

Using FanGraphs projections as the baseline, the Rays look to be around a.500 team as the roster currently stands. It doesn't take a whole ton of creativity to get that number into the Wild Card realm, and looking at the starting rotation, there is enough upside from the front three for Tampa to be a competitive force in the East in 2015.

All of these pitchers are in their prime, and should be on the upward trajectory of the aging curve, yet currently projections list each to regress or stay approximately the same.

*Projected to return from TJS recovery in June

Alex Cobb is well on his way to becoming a reliable starter for Tampa, having increased his innings pitched every year since joining the majors in 2011. Last year, Cobb tossed 166 innings, finishing the year with a 2.87 ERA, 3.23 FIP and a 79 ERA-. His strikeout rate has settled around 21-22%, while his walk rate continues to improve. Last year Cobb had his lowest walk rate of his career at a shade under 7%. Additionally, Cobb's average release speed has increased over the past three seasons, showing he can still generate more and more whiffs. 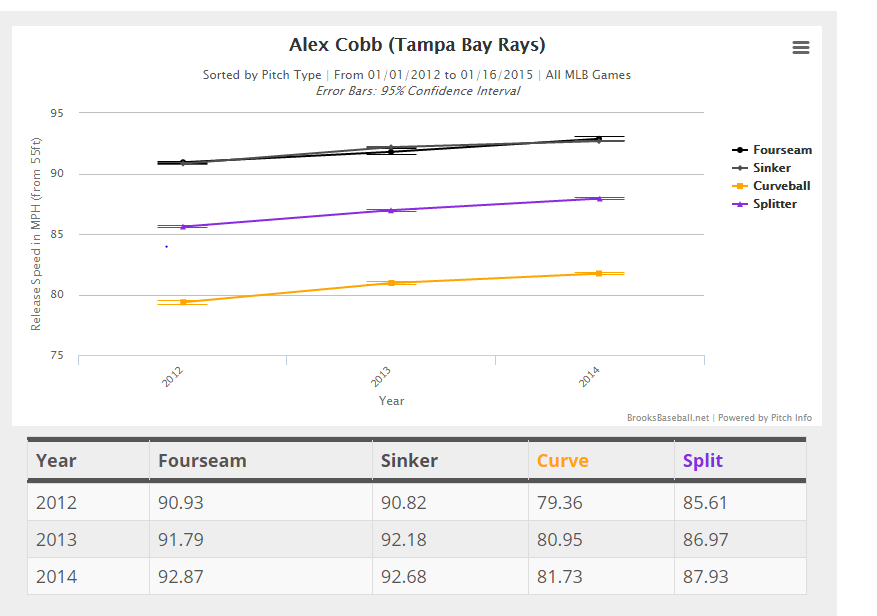 One statistic to watch from Cobb is his 8.5% home run fly ball percentage. This number is a bit lower than league average of around 10%, but Tampa plays in a cavernous home park. Despite Cobb's fly ball percentage increasing to 27.4% (up from about 22% his previous two seasons) he still managed to limit long balls last year.

Considering the underlying numbers, it is certainly possible Cobb can outperform his current projections, and turn into a 3.5-4 win player rather than the sub-3 win player. Cobb should be able to throw 180+ innings in 2015, which should also enhance his value as he continued to harness his raw stuff.

Replace the win Pitching (and hitting) backwards in 2014

Chris Archer finished 2014 with a 2.0 fWAR, and a 92 ERA-. Archer improved his strikeout rate from 2013, but his walk rate increased from 2.66 walks per nine to 3.33. FanGraphs' Steamer projections have him trending in the wrong direction, projecting Archer's 2015 walk rate at 3.33. If he reverses this trend, he should be able to increase his value, and amass an fWAR closer to three rather than two.

Similar to Cobb, Archer is at the upward part of the aging curve, and his velocity has also continued to increase. 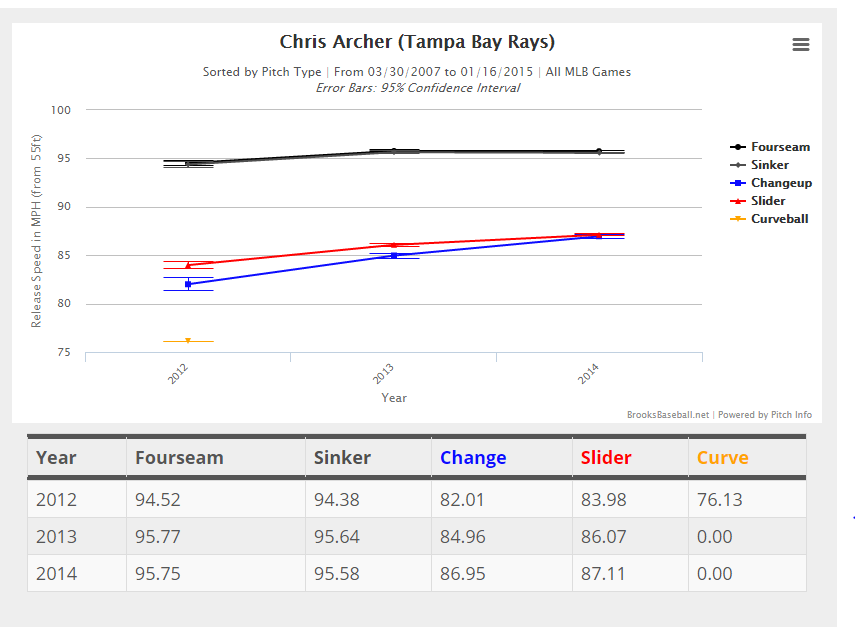 For Archer, the key to make a significant step forward in 2015 will be his command and his walk rate  His 6.9% home run to fly ball ratio in 2014 was two-thirds what it was in 2013, and well below league average, and thus shouldn't be counted on in 2015. Nevertheless, as a groundball pitcher in a pitcher's park, Archer may be able to improve his 92 ERA- in 2015, which will be key in keeping Tampa in the playoff conversation.

This season will be Odorizzi's second full year starting in Tampa, and there is room for improvement, as he is only 25 years old. A projected fWAR of .8, after amassing 2.0, seems low. With a strikeout rate trending in the right direction, and increasing innings, Odorizzi should be able to be a valuable number three starter this season.

Andrew Friedman and Joe Maddon may be gone, but they changed the franchise from a cultural and personnel standpoint, and set the team up for the future. The fate of the Rays did not leave town with their departures, and with a little good fortune and steps forward from the rotation talent they drafted and acquired via trade, the Rays can put together a run for the American League East.

Steven Martano is a Featured Writer at Beyond the Box Score. You can follow him on Twitter at @SMartano or reach him at 38martano@gmail.com.