Who has hit the longest home run at Comerica Park in the HitTracker era?

Matt Keegan, former Pinstripe Alley writer, summed the game up pretty well when he said, "Miguel Cabrera is absurd and should be outlawed". He was referring to Cabrera's two home runs, which provided most of the firepower for the Tigers in their close win over the Yankees on June 2nd, 2012. His first home run in the fourth inning was the monster blast, traveling 466 feet before colliding with an ivy wall in center field. The next home run put the Tigers back on top in the eighth, sailing 444 feet into the crevice outside the center field walls.

Cabrera came into the game batting .315 with 9 home runs on the season. He was the Tigers' powerhouse, blasting no fewer than 30 home runs in each of his four seasons in Detroit. Little did the world know that Cabrera was going to trounce all of his previous numbers by launching 44 home runs in 2012 and capturing the first of two consecutive AL MVP awards. Pitchers feared Cabrera, who helped lead the Tigers to the ALCS the previous year, and he was in the pinnacle of his career. He established his dominance in 2012 by maintaining such impressive statistics over the whole season, qualifying as first in SLG, HR, and wOBA, as well as second in ISO and wRC+.

Hiroki Kuroda was Cabrera's unlucky opponent that day. At the age of 37, Kuroda had a very rocky start with the Yankees. Entering June 2nd, he had compiled a 3.96 ERA and put up very inconsistent starts. Five of his ten starts were deemed as being quality, but in the other five, Kuroda had allowed 22 ER in only 24.2 innings, resulting in an 8.03 ERA. Fortunately, his season evened out and eventually settled at a 91 FIP-. For what it's worth, he was somewhat plagued by home runs, qualifying as 16th in the MLB with a 13.0 HR/FB%. 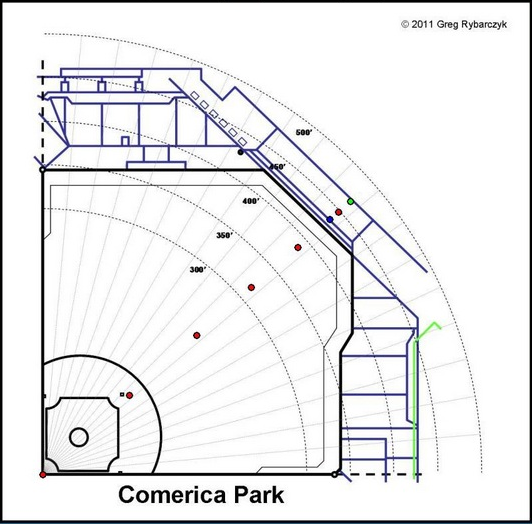 Hiroki walked to the mound in the bottom of the fourth inning, and Cabrera awaited the first pitch from the batter's box. Kuroda went through the motions and released a 91 mph fastball up above the zone for a taken ball. He wound up and delivered again, this time hurling an 84 mph slider. Everything seemed as usual about the slider itself except for the actual placement; the ball flew directly to the center of the strike zone, and Miguel Cabrera took it deep (Video). One powerful swing at the right time in the right place rendered the slider useless as it spun through the air towards centerfield, eventually meeting the ivy wall 466 feet away and becoming Comerica Park's longest home run in the HitTracker era (Since 2006).

With the enormous force behind it, the ball traveled an extra 58.4 feet, or 14.3% farther than his average home run in 2012. Additionally, the baseball left the bat at 113.3 mph, 8.3 mph faster than his usual home run. All in all, Cabrera did some major damage. The solo shot boosted the Tigers' odds of winning by 12 percent and his later shot trimmed the odds even more, increasing their chances of winning by 31 percent. It's safe to say he was the game's MVP (Just look back at Matt Keegan's comment).

The problem with the home run pitch wasn't the actual slider but where the slider went in the zone. In 2012, players batted only .233 versus his slider, which was ranked 25th in value among all qualified pitchers' sliders; however, only 4.44% of his sliders ever crossed the plate in the center of the strike zone. Most of them traveled to the bottom-right hand corner (Catcher's POV) because of the pitch's solid break and vertical movement (9th among qualified pitchers). This slider was not very different from the others in terms of movement, descending 2.7 feet vertically and breaking at 7.9 inches. As you can see from the left Pitchf/x zone profile below, Kuroda's slider is vulnerable to extra-base hits in the middle of the plate. 16 of 29 batted balls from zone 5 (center) went for extra-base hits, and similar numbers resulted from the lower-left hand zones.

So in one part, the placement of Kuroda's slider led to the mammoth home run; the other part of the equation was Miguel Cabrera's mastery of the middle of the plate. Now looking below at the right zone profile, you can see how Cabrera fared against pitches in the middle of the strike zone. In the center band of three zones, he slammed 20 home runs off a possible 112 balls in play, or 17.9%. Not to mention, he batted .312, slugged .578, and put up the highest HR/BIP percentage of any type of pitch off sliders he saw in 2012. 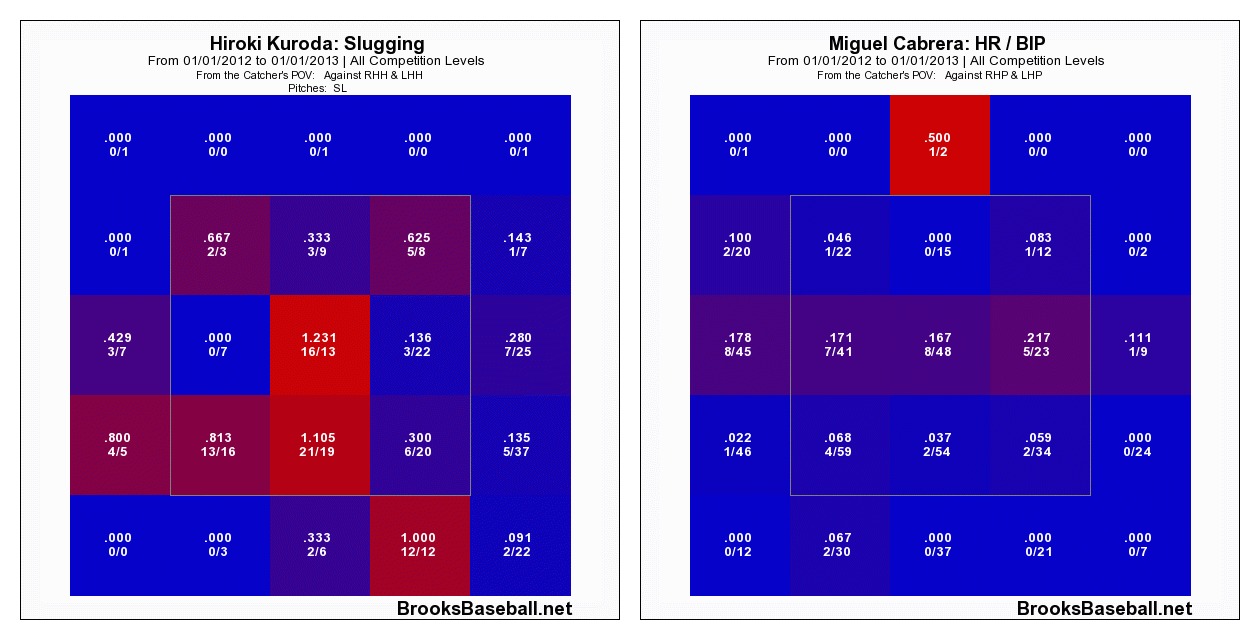 Miggy's dominance and Kuroda's poor placement was all that was needed to fuel this extreme home run. Comerica's longest shot wasn't actually that far when compared against other ballparks' longest, so it wouldn't come as a surprise to see it broken sooner rather than later.

*Note - Miguel Cabrera's HR was actually tied with Magglio Ordonez' home run in 2007 off Julio DePaula. Cabrera's was selected for two reasons. First, it wouldn't be nearly as interesting to analyze a home run where there is no Pitchf/x data, and secondly,  Cabrera's would have traveled farther if Standard HR Distance is taken into account. SHRD negates wind, temperature, and altitude for a more precise (but less practical) home run measurement.