The importance of home field advantage in the World Series

There are no shortage of articles pontificating on the stupidity of awarding World Series home field advantage based on what league wins the All-Star Game. Here's the data that proves it.

Share All sharing options for: The importance of home field advantage in the World Series

New baseball commissioner Rob Manfred has a lot on his plate as he begins his term, among them are flat attendance, an audience that skews older and a game in which pitching appears to be outpacing hitting. Probably not high on his list is the ridiculous notion of awarding World Series home field advantage to the league that wins the All-Star Game, but he should consider it.

There is a home field advantage in every sport -- this table shows it for the four professional sports since 2000: 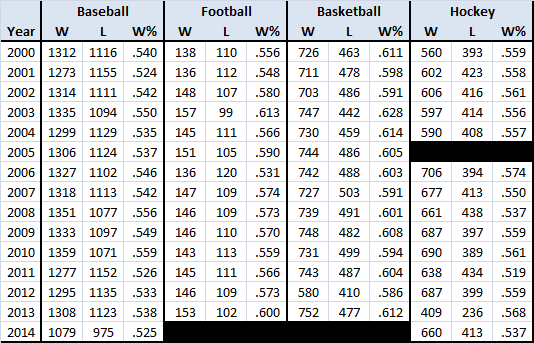 Football and basketball have more pronounced home field advantages because those sports allow the stars to determine the outcome of the game. At the end of a close game, the Cleveland Cavaliers will more often than not put the ball in LeBron James' hands. If the Bears are 4th-and-1 on the 1-yard line with one second to go in the Super Bowl, while there's no guarantee Jay Cutler will hand the ball off to Matt Forte, they'll both likely be on the field. Baseball is different in that after setting the first three spots in the lineup there are no guarantees. Managers can determine who will likely be pitching at the end of a game, but there's a lot of chance everywhere else.

Since 2000 home baseball teams won at a .540 clip (87-75), which in most years puts teams in the wild card race. The home field advantage in baseball, while less pronounced than in other sports, does exist and shouldn't be brushed aside lightly. This chart shows how well teams perform in the playoffs at home:

While the initial rounds of the playoffs (wild card games are included in with division) are very much in line with regular season home field performance, the situation changes noticeably in the World Series, particularly upon the advent of the playoffs in 1969. There are probably many factors that go into this, but it's still hard to ignore the fact that since the playoffs were initiated the home team won around sixty percent of World Series games. Even after acknowledging potential sample size issues, it's a big difference between winning fifty-four percent of games and sixty.

How does this happen? The easy answer is to state "Well, clearly the better teams are winning at home." While this is possible, this chart shows how often the team with the better record won the World Series as opposed to the team with home field advantage:

For League Championship and Division series it's almost equal whether the better team or the home team wins a series, but noticeably changes for the World Series. The recent dominance of home teams in the World Series could be a function of the fact that the AL has won eight of the thirteen All-Star games between 2003-2013, and is generally considered to have been superior to the NL in that time period. It's very possible this is just a rare convergence of superior AL teams receiving the benefit of home field advantage, but that's counterbalanced by NL teams having won six World Series in that time span while having the better record only three times.

There are any number of potential solutions, such as awarding home field advantage to the league with the best interleague record (although this brief article from the Wall Street Journal's Jared Diamond should be taken into consideration). I personally prefer conferring it on the team with the best record, with some kind of tie-breaker when they're the same. In a 162-game schedule where teams have to survive multiple rounds of playoffs, the home field advantage shouldn't be awarded on something as flimsy as performance in an exhibition game.

In this year's All Star Game, NL manager Mike Matheny actually let six of his starters bat three times (Andrew McCutchen, Yasiel Puig, Troy Tulowitzki, Paul Goldschmidt, Giancarlo Stanton and Aramis Ramirez), so an argument can be made he was doing his best to win, but he still used pitchers in the traditional manner. If he was playing for home field advantage, why didn't he use Clayton Kershaw for five innings, Adam Wainwright for three and close with Aroldis Chapman? The answer is obvious, but no less perplexing.

If I were to pick today (and I'll probably change my mind) I'll go with the Angels and Nationals meeting up in the World Series, and since the AL won the All-Star Game, the Angels would have home field advantage. I'm not suggesting that Bud Selig did something monumentally stupid when he made this change, because prior to 2003 the World Series home field advantage alternated between leagues. There's enough variability in baseball that it shouldn't be compounded by using a method unrelated to team performance in awarding home field advantage. It's precious enough, and to see it magnified in the postseason suggests a more judicious manner in awarding it should be used. Giving it to teams with the best records works well enough in the other three sports, so there's no reason why baseball can't do the same thing.

Just my two cents, Mr. Manfred. And while you're at it, go ahead and lengthen the Wild Card Series to three games -- it's inevitable, so just get it over with.

***** This Google Docs spreadsheet includes information on teams, records and home field advantage for all three levels of playoffs *****

All data from Baseball-Reference