Milwaukee Brewers: Anatomy of a bust

Since the inception of the Divisional Playoff Series, teams that started 71-55 made the playoffs 12 out of 17 times. Make that 12 of 18 after the Brewers' implosion.

Share All sharing options for: Milwaukee Brewers: Anatomy of a bust

I wrote quite a bit about the Brewers this season. I was assigned to do their season preview, was intrigued by their fast start, and recently wrote on their late-season woes. They made it official last week that they wouldn't be participating in the postseason, a stunning development for a team that had been 14 games above .500 as recently as August 19th. This chart shows the steady decline in their FanGraphs playoff odds: 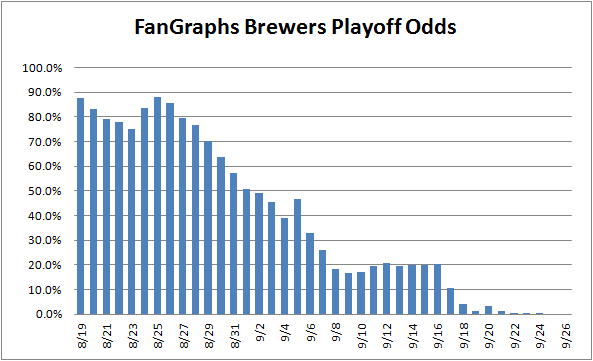 That's just depressing. It's one thing to make note of a decline, quite another to figure out why it happened -- this chart shows selected offensive statistics for the core players:

The left side shows data for games through August 19th and the right from August 20th through Thursday, September 25th. There are some ominous signs, particularly a drop in batting average on balls in play (BABIP) of around 20 points, a precipitous drop in OPS and a truly alarming decrease in the percent of base runners who score (BRs%). What also sticks out is that it wasn't one player who fell, but an entire team

So how did Brewers pitchers perform as the bats went silent?

Putting everything together produces these intriguing numbers:

When the Brewers were playing well, their luck was right around league average, their opponents a little less so. It reversed in a major way in the last third of the season, leading to the extremely bad combination of bad luck on balls in play coupled with good luck for their opponents.

Since the inception of the wild card in 1995, there have been 17 teams that started the season 71-55. This chart shows how those teams finished:

Twelve made the playoffs, including four of the five since the addition of the fifth playoff spot. None of these teams finished with a record as bad as the Brewers will end up with, which will (and should) lead to some frank offseason discussions. Were expectations too high for younger players like Khristopher Davis and Scooter Gennett? Did a lack of production at first, continuing a trend that began last year, continue to hamper them when they needed offense? Was the team worn out by the time September rolled around? These questions and many more will need to be answered.

It's not going to get any easier for the Brewers, or any other NL Central team for that matter. Pittsburgh proved it wasn't a one-year fluke, St. Louis is built for the long haul and the Reds were decimated by injuries this year and could rebound quickly with returns of Joey Votto and Brandon Phillips. And there's the Cubs, who might not be ready to contend in 2015 but could be coming close very soon. Milwaukee can't afford to stand pat.

It's going to be a long winter in Milwaukee. I would not be surprised to see Ron Roenicke fired, and while I suspect Doug Melvin's job is safe, a change could be made there as well. I am not an advocate of reflexive firing of coaches or GMs when a team underperforms, because often it's for reasons beyond their control, but it's hard to state that in this case.

So which Brewers team was the real one, the version of the first two-thirds of the season or that of the final six weeks? As is typically the case, it's probably in the middle -- Baseball Prosepctus projected them with an 82-80 record, which is right around where they will end up. Back at the beginning of the year I thought they might, might be able to be better than this, but not enough to shout it from the rooftops. I was prepared to be wrong as the season progressed but not to be shocked like I am at their finish. It won't receive as much attention as the collapses of the Braves and Red Sox in 2011, but it should, because it wasn't merely as dramatic, it was more. No team in baseball history has ever started 71-55 and finished with as poor a record -- none. Collapses like this have consequences, and the Brewers will have six months to not just identify the problems, but solve them as well.