Lynn is experiencing a new high, owing mainly to his performance against lefties.

Lance Lynn took hold of a starting job for the St. Louis Cardinals in 2012 and hasn't let go. Despite a declining strikeout rate, Lynn seems to have gotten better each year. Lynn garnered 2.8 fWAR in 2012, 3.4 fWAR last year, and he's already got 3.4 fWAR this year in 17 fewer innings than 2013. Lynn's ERA is down. Lynn's FIP is down. Everything looks pretty rosy.

The main driver of this new level of performance is how he's dispatched left-handed hitters this year. One of the criticisms against Lynn was that he had a pronounced platoon split, at least in part because of his delivery (career .336 wOBA against LHH, .281 wOBA against RHH). Lynn has a very low arm slot, shown below. 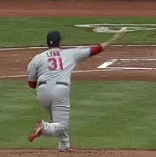 This makes it very difficult for righties to do anything, but lefties can pick this up fairly well. This year, Lynn has narrowed the platoon split to almost nothing (.303 wOBA LHH vs. .287 wOBA RHH). Against lefties, his walk rate is down, his homer rate is down, and his BABIP is down. The main reason appears to be small adjustments he has made with his sinker.

It would seem that Lynn has made a conscious effort to end at-bats earlier. Compared to 2012-2013, Lynn's using his sinker more. In fact, his sinker in 2014 is the most common first pitch by a hair, whereas in 2012-2013 the four seam fastball was his first pitch of choice. Batters are also having a difficult time doing damage against the sinker this year. Below, some numbers:

Lynn has not yet allowed a home run off his sinker this year. The small adjustments I mentioned earlier? One involves where he is locating the pitch; the other is his vertical release point of it. I will examine each, since they might be related. 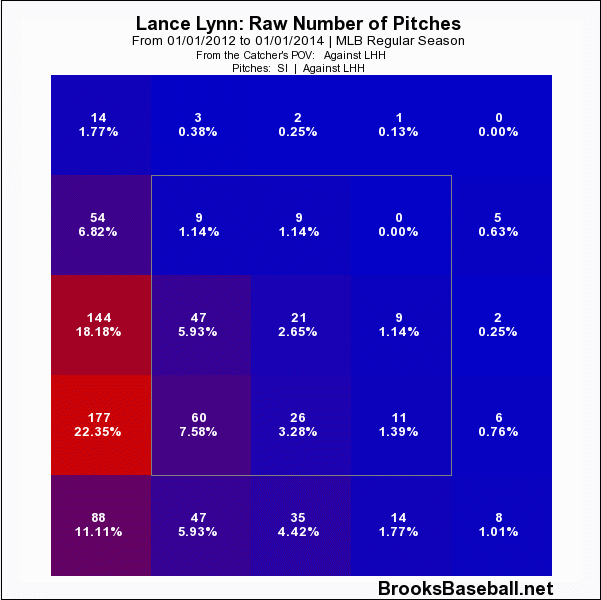 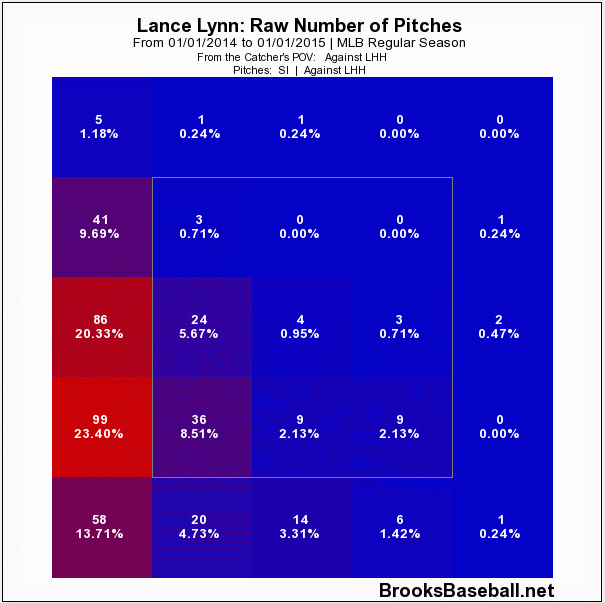 The overall strategy isn't terribly different. The goal is still to locate it low and away. However, it looks like Lynn has improved his ability to spot the pitch away from the middle of the zone. To the left of the strike zone, each of those 4 squares has seen a slight increase in the percentage of pitches located there. Despite the slight shift to more pitches outside the zone, batters are actually swinging at the pitch more: 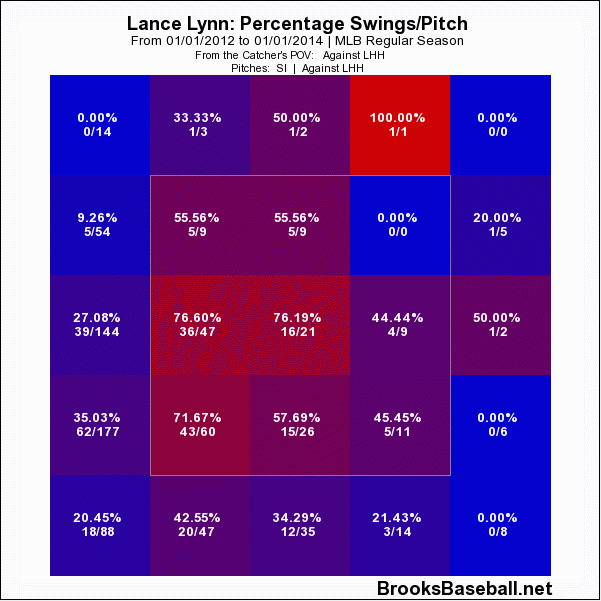 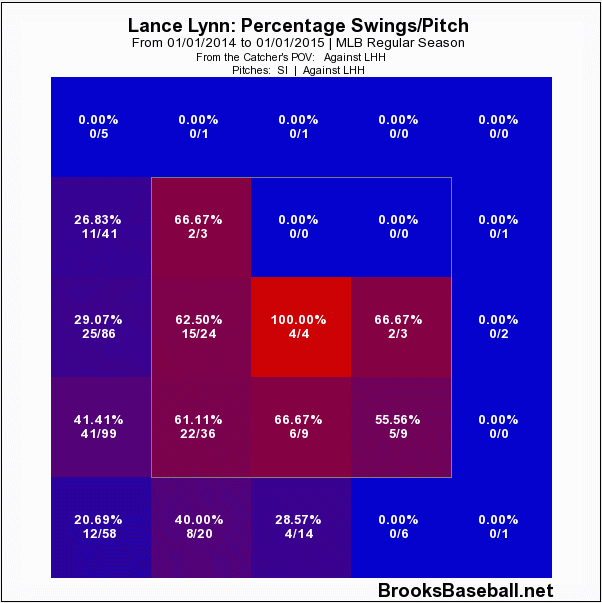 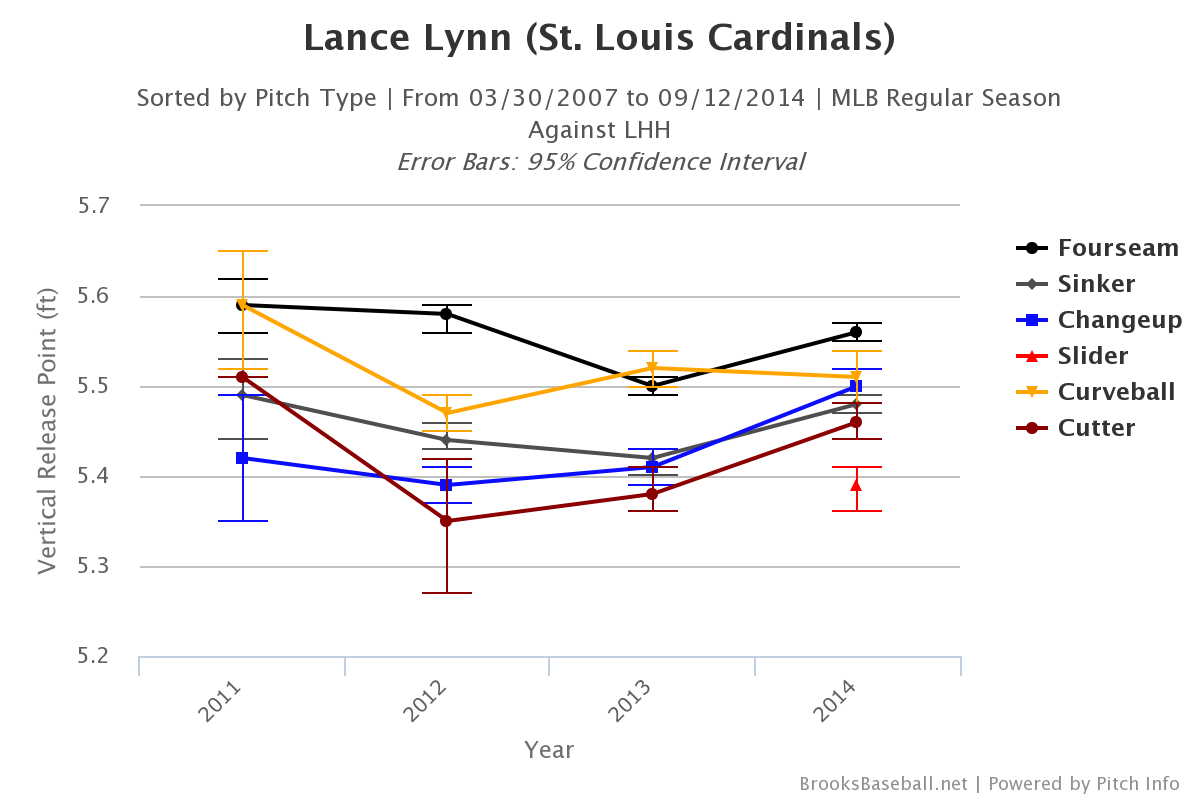 The Two Most Underrated Pitchers in Baseball

Breaking down the success of two pitchers with similar approaches on the mound.

The Two Most Underrated Pitchers in Baseball

The vertical release point for all his pitches has come together this year. It's possible that in previous years, hitters could determine which group of pitches was coming based on the vertical release point. This year, that difference is much more blurry. Perhaps Lynn has gained some extra deception on the sinker due to this convergence.

There are some small adjustments; a little release point difference here, a small difference in location there, but it appears to add up to a more effective pitch -- one that can neutralize lefties. If Lynn has figured out a way to retire southpaws more consistently, he should remain a pretty reliable starter for the Cardinals going forward. I'd really like to know the secret sauce the Cardinals serve their pitchers to make all of them some version of effective.

Kevin Ruprecht is an Editor of Beyond the Box Score. He also writes at Royals Review. You can follow him on Twitter at @KevinRuprecht.