Who has hit the longest home run at Coors Field in the HitTracker era?

This is the stadium everyone has been waiting to see. Coors Field is commonly the brunt of the high altitude dilemma, where players' almost-home-runs actually make it past the outfield fences because the thin air carries the ball farther. This quasi-problematic effect on the truthfulness of a baseball's trajectory relative to the rest of the league is more colloquially known as the "Coors Effect". Some players benefit more while other players' home/road splits are barely noticeable. As a whole though, Coors Field certainly boosts a team's statistical performance; the Rockies rank first in 2014 with 698 wRC but place considerably lower (t-14th) when measured by wRC+, which accounts for park factors.

Matt Holliday, then member of the Colorado Rockies, was the beneficiary of the Coors Effect when he blasted this moonshot, a home run that traveled 498 feet all the way past the left field bleachers and landed just short of the video-board structure. The longest home run at Coors Field in the HitTracker era (Since 2006) is the second longest overall in that time span; Holliday can be assured that it won't be broken any time soon.

On September 19th, 2006, Matt Cain started the game for the San Francisco Giants on four days rest following an eight-inning shutout against the same Rockies. Colorado had already put up two runs, and Garrett Atkins just homered to begin the bottom of the third inning. Holliday stepped to the plate and watched as Cain delivered the first pitch for a strike looking. Cain released the next pitch and watched as Matt Holliday barreled the baseball for a home run. The blue dot on the HitTracker graphic below represents where the ball actually landed, but the green dot represents where the ball would have landed had it been unimpeded to ground level. 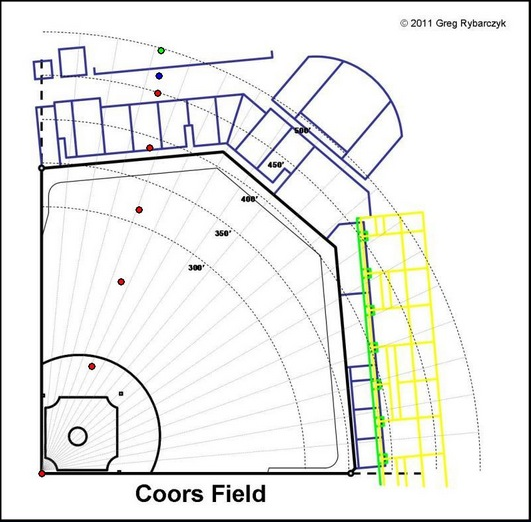 I spent some time deliberating the whole Moonshots series after gathering the data for Coors Field. On one hand, Holliday's home run did genuinely travel 498 feet even if it was greatly assisted by the altitude. Home Run Standard Distance, a measurement provided by HitTracker, takes into account wind, temperature, and altitude for a more precise look at how the ball would have traveled if it were hit on a normal day. HRSD places Holliday's home run at 478 feet, a far cry from the monstrous home run inside Coors. On the other hand, Giancarlo Stanton's home run off Josh Roenicke in 2012 actually has a farther HRSD, traveling 488 feet when climate factors are negated. As you can see, it was a tough choice deciding which form of measurement was better for telling this story. Especially for Coors Field. It's pretty obvious which measurement I went with in the end, but only for the sake of staying consistent with all the other episodes.

Having been drafted in the seventh round of the 1998 draft by the Rockies, Holliday had few expectations placed on him. He actually advanced relatively slowly through the lower levels of the minor leagues, only jumping from one level to the next every consecutive season. Along the way, he displayed competency in every batting area, from average to power and eventually to plate discipline. Holliday had a solid rookie season in 2004, finishing fifth in NL ROY voting after producing runs at a 4% above league average rate. He was trying to build off his impressive 2005 season in which he batted .307 with 19 home runs. By September 19th, 2006, Holliday was batting a cool .332 with a .961 OPS.

Matt Cain was nearing the end of his rookie season at the time of the home run. He had been drafted by the Giants in the first round of the 2002 draft, and unlike Holliday, Cain moved through the system at a normal pace. He was first called up to start at the end of August, 2005 and stayed in the rotation for the remainder of the season. 2006 was Cain's first real extensive test and he answered it with a 3.96 FIP and fifth place in NL ROY voting after making 31 starts.

The reason why Holliday was able to hit the home run so far is more of a mystery because of the lack of Pitchf/x data, but we can still reconstruct the circumstances and splits that likely gave him an edge. To begin, Holliday punished right-handers much more than lefties as 30 of his 34 home runs came off righties. He also happened to be on a bit of a power streak in September, launching 10 home runs in the month alone. He also seemed to favor the game conditions at hand: 0-1 count, 0 outs, and nobody on base because he boasted OPS's of 1.287, 1.099, and 1.023, respectively.

The most obvious factor is the Coors Effect. The table above provides his entire home/away splits from 2006, and you can see a striking difference. Matt Holliday (in almost the exact same number of plate appearances) hit 10 more home runs, batted more than 33% better, and accumulated 55 more total bases. The stadium had an apparent effect on the flight of the ball, as determined by HitTracker, and the offensive statistics back the report up.

The home run wasn't exactly a necessary offensive boost for the Rockies because they continued to pile on runs in the blowout. Holliday did make the Rockies 7% more likely to win the game though, and the final score ended up as Colorado-12, San Francisco-4.

Matt Holliday's home run was one of the best, even if it may be controversial whether he deserves the title or not. The unfortunate problem is that there are few videos of baseball from 2006 left available to the public (by means of electronic malfunction rather than censorship), and this home run seems to be another one that has been lost to time.