Jason Hammel is not having a wonderful time

Hammel has had a rough go of his time in Oakland. Is there anything we can point to?

Share All sharing options for: Jason Hammel is not having a wonderful time

When the A's made the big trade for Jeff Samardzija and Jason Hammel, people thought that Oakland's rotation was pretty set. That is until Hammel imploded and the A's traded for Jon Lester, too. Hammel was in the midst of a great season for the Cubs, gathering 2 fWAR in only 108 innings. His ERA was not completely out of whack compared to his peripherals, but he was running a career high K-BB%. Maybe this is just Hammel regressing toward his career numbers. Maybe there's something else.

First off, I'll note that his Oakland time consists of only 39 innings, so we're working with a fairly small sample. The main issue so far is that Hammel's strikeout rate and walk rate have both hit the other end of the seesaw-rock bottom. The next issue is that his home run rate has ballooned. Combine those things, and Hammel's erased nearly half the value he accrued as a member of the Cubs in far less than half the innings.

It's possible that a change in his pitch usage is related to the decline. Because the category trend showed some interesting shapes, I'll show that instead of his more granular pitch types. Hammel has been a member of the A's for the vast majority of July and all of August, so that represents a nice break. 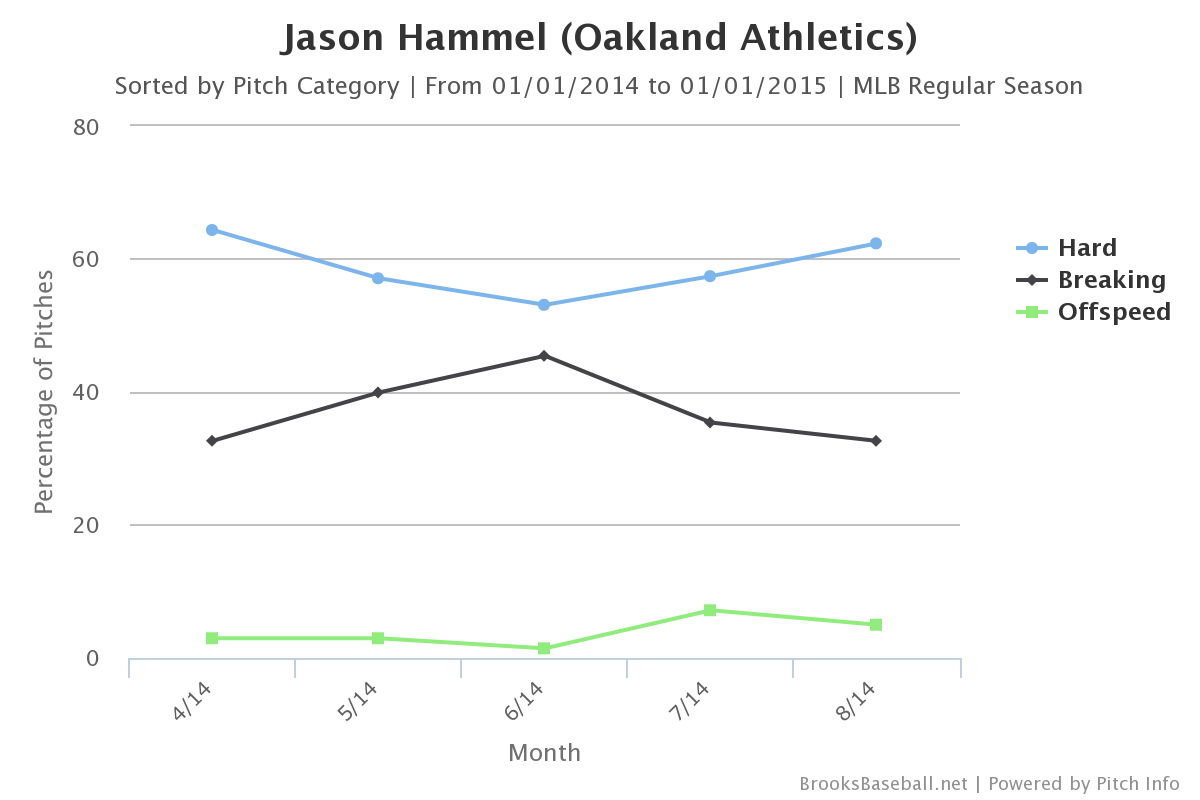 While his offspeed usage has increased slightly, the mirrored trends of the hard and breaking stuff are interesting. Prior to the trade, Hammel was relying more and more on his breaking stuff and less and less on his hard stuff. Then the trade happened, and there is seemingly a reversal of the trend for both categories. Since Hammel was finding success in April with a similar distribution, this probably isn't significant.

There are some other interesting numbers in the plate discipline department. While Hammel's zone percentage is up, his first pitch strike rate is down. It's possible that Hammel has just fallen behind hitters more than usual in his Oakland tenure and has had to rely on his fastball to work back into the count. Unfortunately, hitters are ready for that sort of thing, and Hammel's rate of contact given up in the zone has increased drastically as a member of the A's. Giving up contact isn't great. Somehow, despite his zone percentage increasing, Hammel's walk rate has increased. Baseball, friends.

In the end, Hammel's struggles may have been nothing more than a string of really bad luck. Three of four starts by Hammel in August have been good, but he's still got a homer problem. Everyone thought that the A's were pretty set after acquiring Samardzija and Hammel. This is a good lesson that pitching can be subject to wild fluctuations in performance, and even favorable situations (some pitcher friendly parks, good outfield defense) can't prevent that.

Kevin Ruprecht is a Featured Writer of Beyond the Box Score. He also writes at Royals Review. You can follow him on Twitter at @KevinRuprecht.