Kevin Gausman was rushed to the big leagues, where he has been a welcome addition to the pitching staff. However, the immediate contributions Baltimore is enjoying come with a long term developmental cost for their heralded future ace.

"The worst thing would be rushing him to the big leagues where he puts the slider away because it’s his third best pitch at this point." –ESPN’s Keith Law, on Orioles’ pitcher and preseason top prospect Kevin Gausman, January 2014.

Keith Law’s fear has become a reality. Baltimore Orioles starting pitcher Kevin Gausman began the year in Class AAA Norfolk, but when the Orioles’ needed a starter on May 14th, they turned to Gausman. He began shuttling back and forth between Baltimore and Norfolk for the next two months, but when it became clear to the Orioles’ brass that Gausman was one of the best five healthy starting pitchers in the organization right now, they awarded him an extended opportunity with the Major League club.

The staff ace at Louisiana State Univeristy just over two years ago, Gausman was indeed rushed to the big leagues. He debuted in 2013, just a year after being drafted, but has experienced little success in his first trial as a starter. He was brought up later that summer to work out of the bullpen, where he found his first taste of Major League success. The young righthander boosted the Baltimore relief corps during the playoff chase, but his premature Major League contributions, both this year and last year, have come with a cost.

Gausman throws a four seam fastball, two changeup varieties, and a slider. The four seamer has a bit of arm side run, sits above 95 MPH, and is very effective right now. As for the changeups, one is a split-change (Brooks Baseball classifies it as a splitter) that gets terrific movement and is typically used as a two-strike pitch. The other changeup is a more traditional variety, which is thrown in the zone more frequently.

This leads us to the slider. Arguably the biggest developmental hurdle that Gausman needed to clear to reach his lofty ceiling, his clear third pitch has taken a step back this season. The graph below shows the frequency with which Gausman has thrown his breaking pitch by month. He has only had one start thus far in August so do not take the slight rise in sliders too seriously. Instead, notice the sharp decline in the months preceding it. 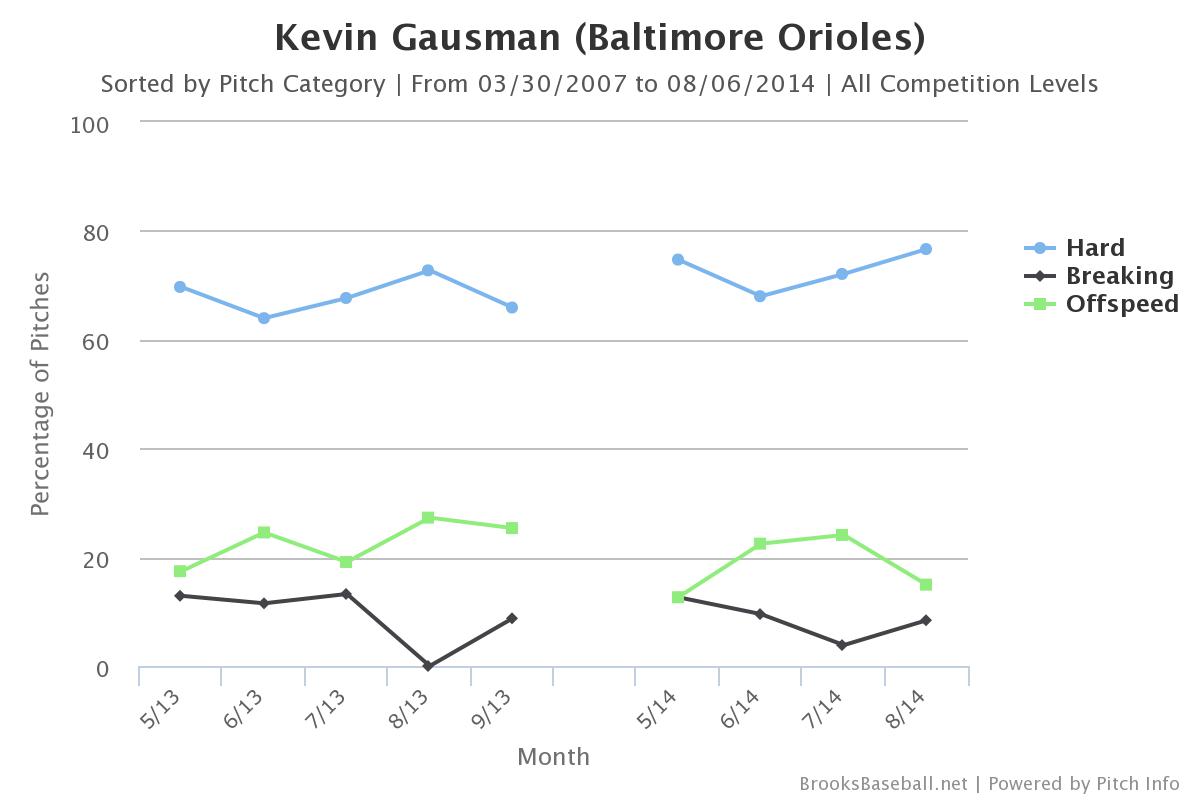 You will also notice a sharp decline in slider usage last season when Gausman moved to the pen, but the important takeaway is in the usage for this season. The Orioles had certainly hoped that Gausman would have shown enough improvement with the slider that he would be able to use it more frequently, but clearly this has not been the case.

Instead, Gausman is very meticulous in picking his spots to use the pitch. The chart below shows his pitch selection by inning in the 2014 season. 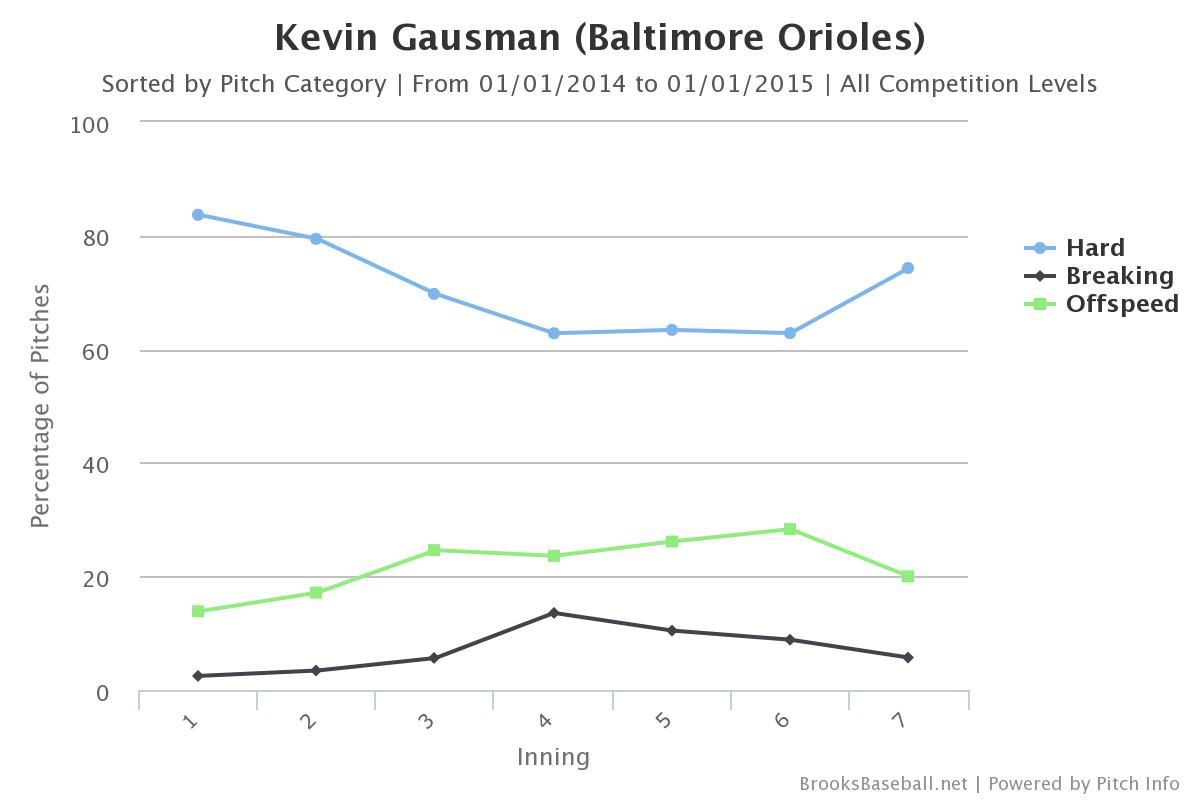 During the first time through the order in the first few innings, Gausman relies almost exclusively on the fastball. He throws it 84 percent of the time in the first inning and 79 percent of the time in the second inning, which are the innings where he enjoys the most success. In the first and second inning this season, Gausman has a combined 2.45 ERA and respective OPS Against totals of just .660 and .551. Even if opponents know that the fastball is coming, he is still able to pitch very effectively.

Putting this in the context of a single game, the pitch selection of his most recent outing against Washington on August 4th is consistent with these usage patterns. On this chart, the pitch speed is on the Y-Axis and the Game Event ID (which includes pitches, baserunner advancements, and pickoff attempts, among other things) is on the X-Axis. Though they are not distinctly marked, the innings are clustered together and can be divided by vertical lines running through the larger gaps between the clusters.

In this chart, we see that Gausman threw only five offspeed pitches during the first two innings – two sliders and three split-changes. As the game went on, he increased the frequency of the offspeed pitches every inning until the fifth and sixth, where he peaked at six offspeed pitches in each inning.

Gausman has a specific game plan that allows him to get the most out of his shallow arsenal. It is a gameplan that is quite common, assuming the pitchers’ fastball is good enough to get himself through the first few innings. If a pitcher is able to do this, he can save his best stuff for later in the game when he faces hitters a second and third time. Gausman clearly has a fastball that can turn over a lineup once almost by itself, but when he needs a third pitch to keep hitters off the fastball, the changeup is the only pitch he is able to throw with conviction. Conventional wisdom holds that it is very difficult for a two-pitch pitcher to succeed as a starter and Gausman’s average performance this season supports that principle. Despite having a fastball and changeup varieties that some would call elite, he is currently average because he lacks a quality third weapon in his arsenal.

Due to the needs of the Major League club, Gausman was pushed into duty prematurely and was deprived of the opportunity to develop the slider into a high quality pitch. He has still been a welcome addition to the Orioles’ staff, but he is not pitching anywhere close to his potential. It is anyone’s guess whether Gausman will suddenly find the slider while in Baltimore, but we can say with confidence that if he never finds it, the performance we are currently seeing from Gausman is what the Orioles can expect in the future. He has reached his floor and although the ceiling seems very high and very far away, it is largely a pitch away from becoming a reality.

Dan Weigel is a Contributing Writer at Beyond the Box Score, a video scouting intern at Baseball Info Solutions and a former left-handed pitcher at Bucknell University. He currently holds the Bucknell school records for most shirseys worn to class and most rounds of fungo golf played. You can follow him on Twitter at @DanWiggles38.