Cubs fans have been waiting for the debut of their young talent for over two years. In Javier Baez' case, the wait is over.

Share All sharing options for: Javier Baez: It begins

Welcome to the big leagues, Javier Baez -- best I can tell, this link lists players who hit a walk-off or game-winning home run in extra innings in their first game. Way to make an entrance, and way to make me completely re-write my opening to this post. As a Cubs fan, feel free to do this whenever you want.

Most Cubs fans are aware of their plan for developing sustained excellence -- build a solid farm system, develop the young talent and don't waste money on over-priced free agents (like Edwin Jackson ). It's easy to articulate, far more difficult to accomplish and creates pent-up demand for excellence amongst the fan base. Team President Theo Epstein and General Manager Jed Hoyer have not been shy in their statements that patience is a virtue, with Epstein going so far as to say:

To their credit they've been true to their word and the time is at hand. Arismendy Alcantara was brought up last month, and Javier Baez joined him Tuesday evening. Every team is excited when their young prospects are brought up, but the buildup to Baez has been nothing short of unbelievable. Baseball Prospectus 2014 wrote this about him:

If you listen carefully when Baez swings from his heels and makes solid contact, you'll hear both a thunderclap and a choir of angels singing hosannas to the fastest bats in the minors . . . Baez may never post high OBPs or win Gold Gloves, but the possibility of game-changing power at a premium position has Cubs fans hoping to see him in Wrigley this summer.

That wish has been granted -- if you think the prose set a high threshold, look at the Oliver projections from FanGraphs:

I tweeted these projections Monday evening and was inundated with responses, including these from two men for whom I have tremendous respect:

Indeed. I was reminded by Harry Pavlidis of the Baseball Prospectus projections:

These are stunningly high expectations for a man not yet turned 22. To project anyone with 30+ home run power in this day and age, let alone a middle infielder, is setting the bar extremely high.

So far I've shown projections -- what about actual results? The following tables are from Daren Willman's outstanding MLBfarm.com (PS -- drop Daren a tweet since he's about to become a first-time father). All the data can be seen here, and this first chart shows Baez' minor league numbers for 2013-2014:

This chart shows the results of his at-bats: 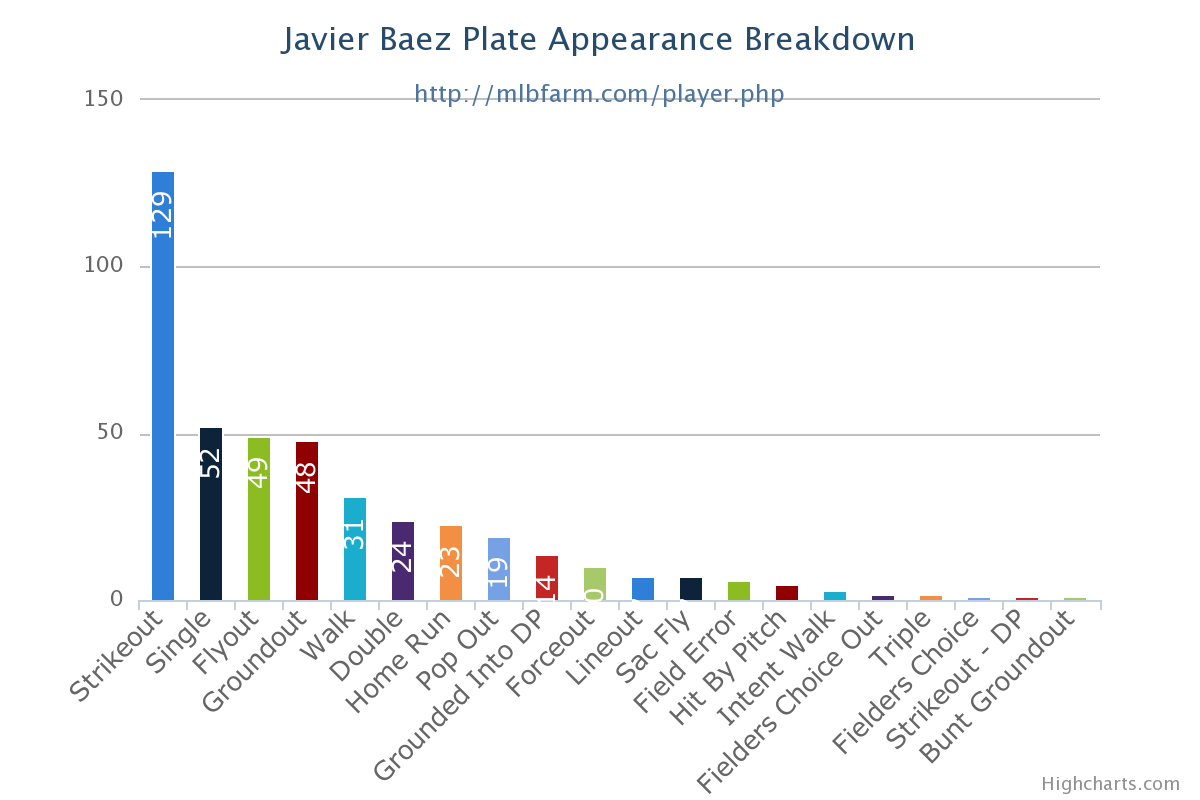 Yes, the strikeouts are a concern, even for a power hitter. Yes, it's hard to miss the fact he has almost as many home runs as walks. Yes, his strikeout rate of 30% would be among the highest in baseball this year, and none of this takes his fielding into consideration or what position he's going to play. And yes, he did strike out in three of his six at-bats in his debut game.

And as a completely rational Cubs fan, I don't care! The Cubs have been down so low for the past couple of years that any ray of sunshine will be gratefully accepted. The Cubs need pitching since there's a very good chance it's not currently in their system, but with enough prospects and with a willingness to spend this can be addressed fairly quickly.

The business of baseball: The Chicago Cubs

The business of baseball: The Chicago Cubs

Things are going to start happening very quickly for the Cubs --  approval for Wrigley renovations finally appears to have been resolved, but I'll believe it when our daughter tells me heavy equipment is in the area. Other young talent like Jorge Soler, Albert Almora and Kris Bryant is on the cusp with more on the way. Will they all become huge stars and change baseball the way the Yankees' Derek Jeter, Jorge Posada, Bernie Williams, Mariano Rivera and Andy Pettitte did over a ten-year span? That's far too high an expectation to place on any group of prospects, but I will cautiously state that it's not outside the realm of possibility. The young Cubs are coming, ready to turn irrational exuberance into sustained excellence. As a cruel teaser, these are the Baseball Prospectus projections for Kris Bryant:

It could be the best of times to be a Cubs fan, it could be the worst. No matter what, the plans of Theo Epstein and Jed Hoyer are about to come to fruition and judged as a success or failure. Part of any of the call-ups includes starting the clock towards when players will be eligible for free agency, but the Cubs have shown the willingness to lock up young talent like Starlin Castro and Anthony Rizzo, making that clock almost an afterthought. In the end the Cubs will be judged not on how they managed a payroll but on winning, and they're poised to enter a period of sustained excellence in both aspects if all goes as planned, the most important (and overlooked) caveat in sports.

Just wait 'til next year. Scratch that -- the wait may be over.