Jon Lester for Yoenis Cespedes: A trade like no other

The Red Sox-Athletics trade of Jon Lester for Yoenis Cespedes, in effect trading one established star for another, is extremely unusual.

Last week's trade deadline was a flurry of activity, but not necessarily unprecedented. This graph shows the number of July trades from 2000-2014: 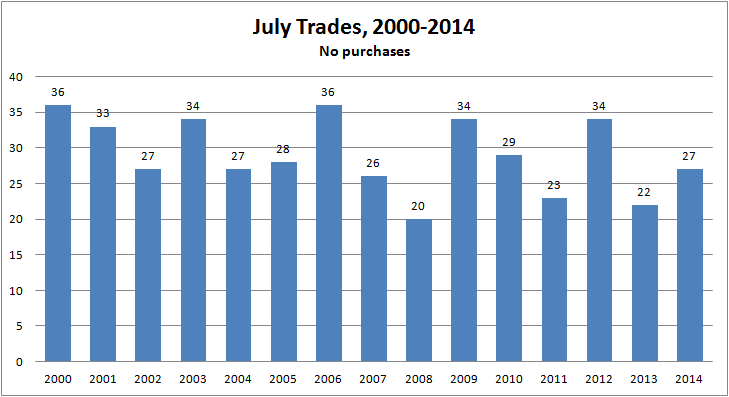 Some of the trades were interesting in their timing, such as the Athletics trading top prospect Addison Russell (and others) to the Cubs for Jeff Samardzija. Others were intriguing to watch in real time like the Tigers trading Austin Jackson to the Rays as part of a three-team deal for David Price and having to pull Jackson in between pitches. But as the graph shows, it was just another trade deadline --  players were moved, but the talk as usual far exceeded the activity. "Open for business" ended up being just another euphemism for "nothing happening here." Read this for an excellent recap of last Thursday's deals.

Except for one deal. The Red Sox started off Thursday with a stunning announcement, trading Jon Lester, Jonny Gomes and cash for the Athletics Yoenis Cespedes and a 2015 compensation draft pick. What made this trade so unusual? This was the first trade swapping one star for another in quite some time.

This Google Docs sheet shows all July trades from 2000-2014, and in a post I wrote some time back I noted that baseball trades seem to break down into three categories:

It's important to note I'm describing an established star, not merely someone who became one --  there's plenty of trades along those lines. In 2012 the Angels traded Jean Segura (among others) to the Brewers for the rights to two months of Zack Greinke. Whether Segura can be called a "star" is a fair question, but given the outcome (Greinke signed as a free agent with the Dodgers after the 2012 season) chances are the Angels would like Segura back despite Erick Aybar's bounceback season. Other deals like this include the Cubs trading Josh Donaldson to the Athletics in 2008 and Astros trading Ben Zobrist to the Rays in 2006 -- these deals turned out well for the acquiring team, but it also requires 20/20 hindsight to see that.

As you view the trade list, interpret it in two different ways -- go ahead and see how players developed, but at the same time remind yourself at what stage every player involved was, be it suspect, hot prospect, star or over-the-hill. It's clear that A's general manager Billy Beane was going all-in this year since he had used up his prospects in the Samardzija deal and needed to dip into big-league talent to get the Lester deal done.

There is no other deal like this since 2000 in which one star was exchanged for another, and I went all the way back to 1986 when I lost interest -- it just doesn't happen. Go further back than 1986 and I'm sure there's some kind of deal like this, but the fact one hasn't occurred in close to 30 years supports my conclusion.

My point in the trade post I wrote some time back was very simple -- trades just don't happen like they used to, and when they do, stars are rarely exchanged for stars. It does happen, and one only needs to go back to this past off-season to see Prince Fielder exchanged for Ian Kinsler, but even that requires some bending of the definition of "star" in Kinsler's case, his 2014 season notwithstanding. I thought the Samardzija deal wouldn't be topped in this trade cycle, and I was dead wrong. Having written that, I was wrong for one very simple reason -- star-for-star trades just don't occur at the trade deadline, and to expect to see deals like Lester-for-Cespedes next July, while possible, is setting one's self up for extreme disappointment.

All trade data from Baseball-Reference. Any mistakes in amalgamating the data are the author's.