A Tale of Two Jacobs: deGrom, Peavy battle it out

Jacob deGrom and Jake Peavy each took no-hit bids into the seventh inning Saturday, with Peavy retiring the first nineteen Met batters, but they each pitched very differently.

Share All sharing options for: A Tale of Two Jacobs: deGrom, Peavy battle it out

One has long, flowing locks; the other, a short cut. One is a 26-year-old rookie; the other, a 33-year old veteran of thirteen campaigns. One is on a team trying to avoid the cellar; the other, a wild-card team in the hunt for a division title. But on Saturday night, these pitchers – one preferring his full name; the other, a nickname – matched each other for seven glorious innings. Jacob deGrom and Jake Peavy aren't the best pitchers in their league, but you sure wouldn't have known it.

Since June 16th, when he imploded for six runs on twelve hits, deGrom has gone at least six innings and given up two or fewer runs in all but one of his eight starts. During that 6-1 stretch, he's been good for a 1.52 ERA and 1.88 FIP, with a 4:1 K:BB ratio. Only a fifth-inning walk to Brandon Belt marred his evening until the seventh, when Pablo Sandoval doubled. (deGrom did finally yield two runs to the Giants in the eighth, but by that time his teammates had gotten four off Peavy, and Jeurys Familia and Jenrry Mejia closed it out.) Variety was the name of the game for deGrom, as he threw curveballs for over one-fifth of his 101 pitches on the night, much more than his 8.6% figure for the season. Check out this nasty one to get Peavy swinging in the sixth.

He did back off the slider and changeup slightly, but the curve really complemented his fastball, which topped out at 96 mph, his third-highest velocity ever. For a guy who made his professional debut in 2010 and hadn't passed high-A ball unitl the beginning of 2013, this is quite the turnaround. He rocketed up to triple-A last year and, after being called up to replace the injured Gonzalez Germen, has shown plenty of promise. (He even broke the Mets pitchers' 0-for-64 start to the season, getting a hit in his first big-league at-bat.)

In the draft, teams are trying to maximize their return. However, assuming the ith pick results in the ith best player among 1st round talent, what should we expect from the pick?

Living on the extremes of run cRE(24)ation

David Murphy and Xander Bogaerts are making the most (and least) of their hits so far this season.

Drafting Extrema: The Expectations of Draft Picks Living on the extremes of run cRE(24)ation

Peavy did deGrom one better through six-and-a-third innings, retiring the first nineteen batters he faced. He's a long way from his glory days with the Padres, when he amassed 22.9 fWAR from 2002 to 2008. His best FIPs, 2.89 and 2.84, came in 2005 and 2007 (when he won the NL Cy Young), and both are nowhere near the 4.61 he's posted to date. Back in the National League for the first time in five years, he won't be adding much value with his bat (.172/.210/.224 career slash line), but the Giants will certainly benefit from Peavy supplementing emerging ace Madison Bumgarner, as well as veteran Tims, Hudson and Lincecum, and 1998 Giant draftee Ryan Vogelsong, in his second stint in with the team.

Peavy relied on his hard stuff more than deGrom did: including cutters, 61 (68.5%) of his 89 pitches Saturday were of the fastball variety. Through the first six innings, he only allowed one hard-hit ball and a total of three to the outfield, one of which was foul. 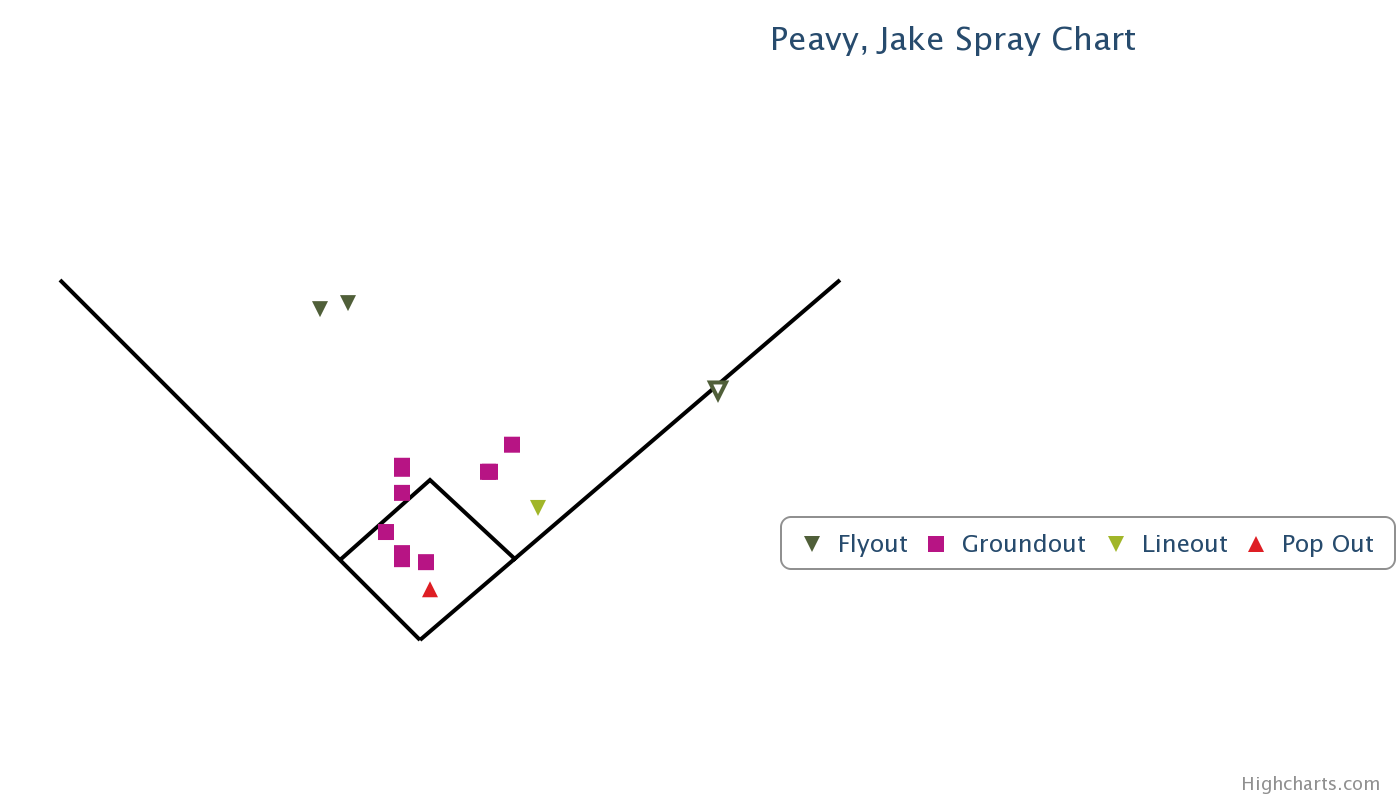 Admittedly, both pitchers eventually caved in, Peavy allowing four runs in the bottom of the seventh and deGrom giving two back the next half-inning. But they both electrified the crowd for most of the evening, deGrom receiving a standing ovation upon being lifted for Familia, and both will be key cogs in the springs of hope for their respective teams, even if one's is further in the future than the other's.

All statistics courtesy of FanGraphs and Baseball-Reference. PITCHf/x data from Baseball Savant.