Evan Longoria is having a fine season, but he's not having an "Evan Longoria Season." What's causing his mild slump this year?

I've never been successful enough to be a victim of my own success. I can imagine the feeling though. Perhaps my writing was so well-received and so widely-read that people had come to expect five really in-depth articles per week from me. If I suddenly started producing three really well thought out and well-researched articles in a week, there might be questions about "What's wrong with Justin?" This type of thing happens in sports all the time. And I'm about to perpetuate that.

Evan Longoria is the victim of his own success here. There would be no need to analyze a player on pace for 4.1 fWAR if he wasn't an incredibly successful player. Hell, a four-win season is a career-high for most guys. For Evan Longoria, though, it represents a blip. If things continue, and if Longoria does finish with somewhere around four wins this season, it would be his lowest total for a full season in his career.

So far this season, Longoria has been worth 2.8 fWAR. He's hitting .256/.333/.395 on the season. These numbers, in and of themselves, aren't terrible. In fact, if I weren't the one writing this article, if I weren't in the business of analyzing thing at a greater depth than many others, I might say Longoria is just as good as he has ever been. But that would be a lie.

Longoria is having a down year. He's put himself in the position of being analyzed because of his past success, but that comes with the star's territory. Let's take a look at what might be causing Longoria's dip in production.

He only needed to get 16 outs, but it still counts

Longoria's career numbers leading up to this season are incredible. Aside from the injury-related dip in 2012, Longoria has performed at a level that puts him in the upper echelon of all players in the league - not just third basemen. His career WAR coming into this season was 36.1. With this season's production, Longoria ranks first in fWAR since his debut in 2008. That's right, first.

Longoria ranks ahead of names like Miguel Cabrera, Albert Pujols, Robinson Cano, Troy Tulowitzki, and more. Yet, this season, he's showing some troubling signs. It's not just a matter of his batting average and on-base percentage being down. Longoria's struggling to hit for power and it's not coming from something as simple as a lower BABIP. His BABIP is slightly lower, but not enough to correlate to his reduced power number.

Longoria's ISO this season is nearly 100 points lower than his career average. He's only hit 13 home runs this year. While Longoria's defense isn't necessarily a liability (82.2 career UZR), most of his value has been derived from his offense. As a power-hitting third baseman, Longoria hit 20 or more home runs in each season outside of the 2012 injury-shortened season. This year, he'll struggle to get to 20. In fact, ZIPs projects Longoria to hit eight more homers on the year. That would put him at exactly 20, but we know that as good as projections are, expecting it to hit exactly is foolish.

The first immediate problem we can spot in Longoria's peripheral numbers this year is his fly ball rate compared with his ground ball and line drive rates. First, look at the increase in Longoria's ground balls to fly balls. Then take a look at the decrease in HR/FB. The rest of the numbers speak for themselves. 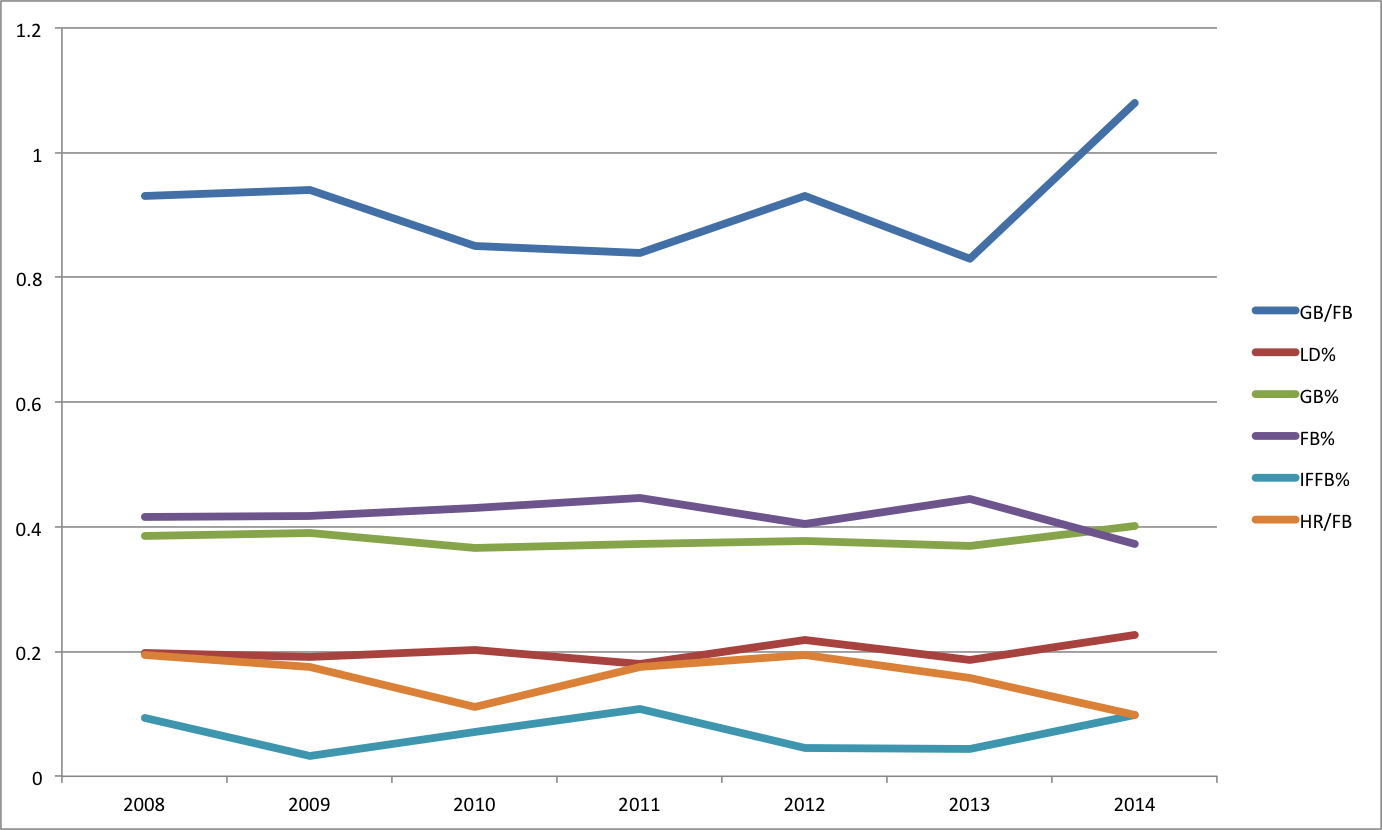 Every one of those lines indicates a problem when looked at in the context of Longoria's lower power numbers. He's hitting more line drives, more ground balls, less fly balls, and less home runs. But, of course, his rate stats for balls in play is not exactly explanatory. The question still remains: why are these numbers happening?

Longoria has been a relatively patient hitter at the plate in his career. For a power-hitting third baseman, his walk rates and strikeout rates haven't been horrible. As I've already mentioned, those rates are relatively unchanged this year, but Longoria is still showing less patience than he has in the past. How so? He's swinging more often, swinging at more pitches outside the zone, making less contact, and generating more swinging strikes. 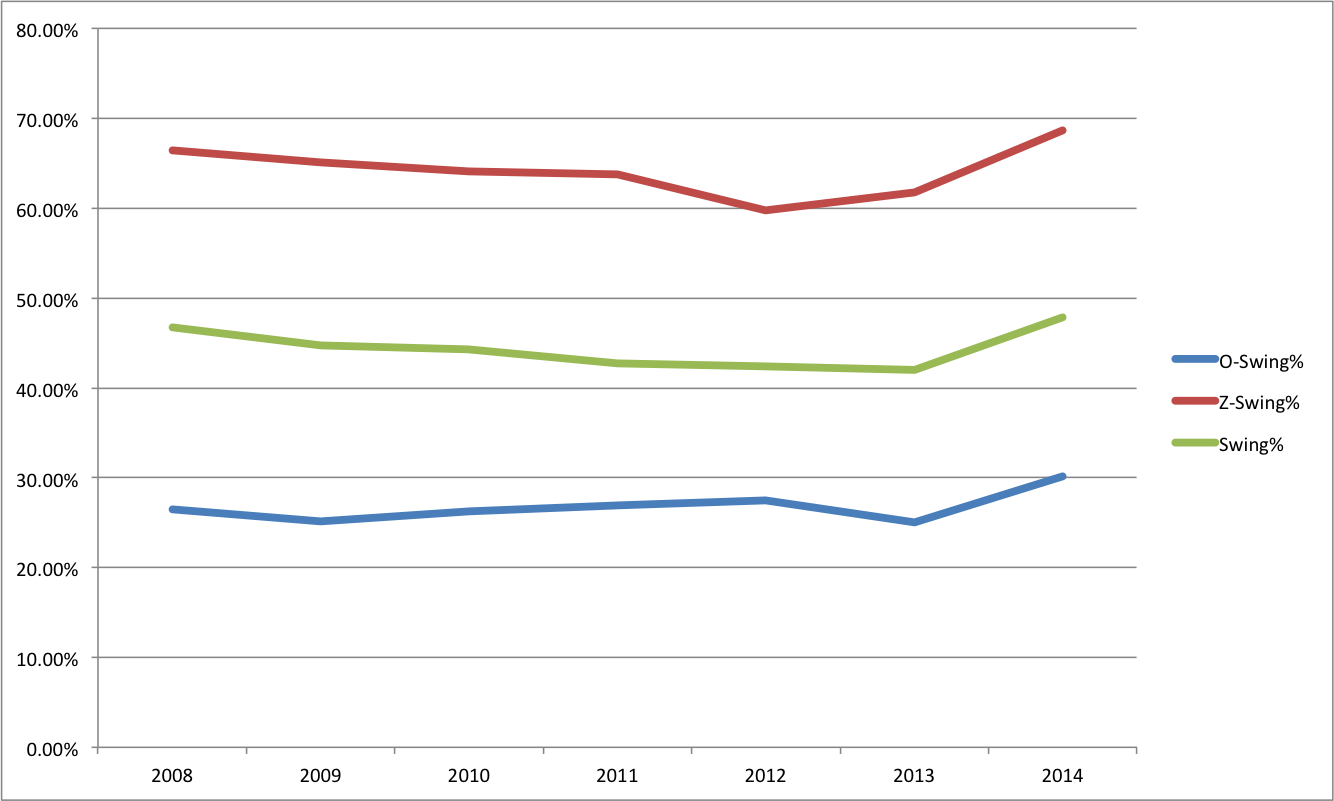 Longoria's contact rate for his career is 76.70%. This season, his contact rate is 76.60%. He's making contact just as often as he always has, but he's not making the pitcher work as much. Longoria is seeing nearly two pitches less per game this season when compared with last year. That might not seem like much, but it add up over a long season. Less pitches, less patience, more of an inclination to hit bad balls.

Unless Longoria isn't seeing the ball as well this season, as opposed to simply being aggressive, this is a very correctable problem for him. He's 28 years old, so he is still in his prime. Longoria, while having a very nice season, will likely return to the six or seven win player we know him as in the near future. As long as he stops swinging at everything thrown anywhere close to the plate, that is.

Justin Hunter is a contributing writer to Beyond the Box Score. He is also the co-author of the upcoming book, TheGuide to Launching a Profitable Sports Blog. You can follow him on Twitter at @the5_5hole.