Justin Masterson went from an All-Star and a contract extension candidate, to a struggling below-average pitcher.

Share All sharing options for: What's happened to Justin Masterson?

Before the 2014 season got underway, the Cleveland Indians were interested in signing soon-to-be free agent Justin Masterson to a contract extension. Masterson was coming off an All-Star appearance and a season in which he boasted a 3.45 ERA and a 3.35 FIP, and was seeking a multi-year deal worth around $17 million annually. But whatever the Indians offered him -- reports claim it was $14 million a year -- wasn't enough as talks broke off in late March.

Masterson wasn't too upset, however.

"So even though it didn't happen right now, I'm not overly disappointed."

It was a rough few months for the 29-year-old hurler in Cleveland, so bad, in fact, that general manager Chris Antonetti decided to ship him off to St. Louis in lieu of continuing to try to keep him in an Indians' uniform. In return, the Cardinals gave up their No. 8 prospect according to Baseball America, James Ramsey. Pretty good pull for Antonetti if you ask me.

It's known that it's tougher to pitch in the American League versus the National League so the train of thought was that Masterson's stats would improve once he got to St. Louis. Not many were of the opinion he would be considerably worse, and I actually liked the Masterson trade over the John Lackey one. But through five starts Masterson has been miserable, and there's even been talk of bumping him from the rotation.

Masterson has literally been nothing but a replacement-type player with the Cardinals. He's made six starts and has lasted past the fifth inning only twice. He has the third-highest ERA and 13th-highest FIP among pitchers with at least 20 innings in August, all of those starts were with St. Louis (warning: small sample size).

He's never been a pitcher who gives up home runs (a career 0.69 HR/9), but in just 27 innings he's given up six dingers after allowing six in 98 innings with Cleveland.

In order to analyze the source of his struggles, I looked at his pitch selection and velocity. His lack of velocity immediately jumped out at me. Aside from his changeup, which he rarely throws and is a relatively slow pitch anyway, every one of his pitches -- four-seam fastball, sinker and slider -- has lost speed from a year ago. 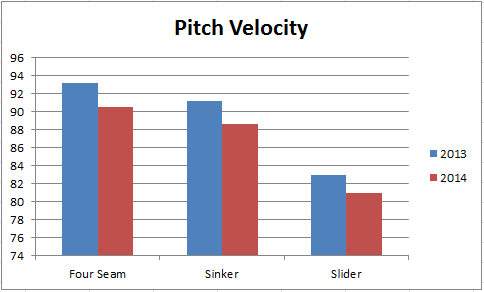 His fastball went from 93.1 to 90.5 mph, his sinker 91.1 to 88.6 mph and his slider 82.9 to 80.9 mph. All are significant drops in velocity, and as a result his four seam and sinker combined have been worth -25.9 runs below average. Despite this, Masterson is still throwing them 81.7% of the time, and because he's relied heavily on his fastballs, he's thrown his slider considerably less and it has lost its effectiveness. His slider is worth 5.2 runs after being worth 18.7 runs in 2013.

Mickey Callaway, Masterson's pitching coach in Cleveland, suggested Masterson's decrease in velocity is due to the knee injury he suffered in July. That's plausible, considering a knee injury could affect a pitcher's mechanics if not fully healed. And even if the knee is healthy, it might still be in the back of Masterson's head, causing him to subconsciously alter his mechanics. To further this claim, Masterson pitched exclusively from the stretch on Saturday in order to simplify things.

But even though it's clear Masterson is having a season to forget, we must take into account his lack of luck. Opposing batters are hitting .348 on balls in play against Masterson, which is the fourth-highest BABIP among pitchers who have thrown at least 100 innings. That's a bit unusual considering  Masterson owns a career .307 BABIP. This can be somewhat explained by the horrific defense he had to put up with in Cleveland (the Indians are dead last in Ultimate Zone Rating). On the other hand, the Cardinals are top seven in UZR, yet Masterson is still allowing a .342 BABIP. But I'm going to chalk that up to a small sample size. It's also not helping that he's giving up a higher line-drive percentage.

Masterson was asking for $17 million a year for two or three years before this nightmare of a season, however, I would argue he wasn't worth that then and definitely isn't now. He's been horribly inconsistent and has really only put together two solid seasons. The Indians knew what they were doing when they repeatedly rejected his offer and traded him to St. Louis.

Justin Schultz is a Featured Writer at Beyond the Box Score. You can follow him on Twitter at @JSchu23.