Due to his drop in fastball velocity, ineffective breaking pitches, and worse-than-usual control, Ubaldo Jimenez has not been the pitcher the Orioles had hoped to sign.

In need of an ace for his staff, Orioles GM Dan Duquette opted not to shell out hundreds of millions of dollars in pursuit of an established ace; instead, he signed a true boom or bust pitcher with a chance to become one.

Ubaldo Jimenez has had an up and down career to say the least. Owner of a 2.20 ERA in the first half of 2010 and a 1.82 ERA in the second half of 2013, Jimenez has teased us for years with his top of the rotation potential. However, he has not been able to maintain his flashes of dominance for more than half of a season and when he is not dominating, he is often terrible.

The latter outcome has been the reality for Jimenez in Baltimore this season, but his numbers have hit a new low. His strikeouts, while still solid at 8.13 per nine innings, are his lowest since 2008. His 5.29 walks per nine are the worst of his career and the most of any pitcher with at least 110 innings pitched this season. Additionally, Jimenez’s home run rate of 1.11 per nine innings is well above his career mark of 0.76 and is the final component of his unsightly 4.76 FIP. He hasn’t pitched well by any account, but two reasons for his failure stick out above the rest: his diminished velocity and inability to reinvent himself as a pitcher thriving on movement and control. Velocity peaks early for pitchers, and as a pitcher past the age of 30, it is no surprise that Jimenez’s velocity has trended down in recent years. His once-potent fastball that averaged 97.38 MPH during his dominant 2010 campaign is presently down to the 91 MPH range. That’s a whopping difference of over six MPH and completely changes the profile and effectiveness of this pitcher. The chart below shows the velocity of his pitches over time. 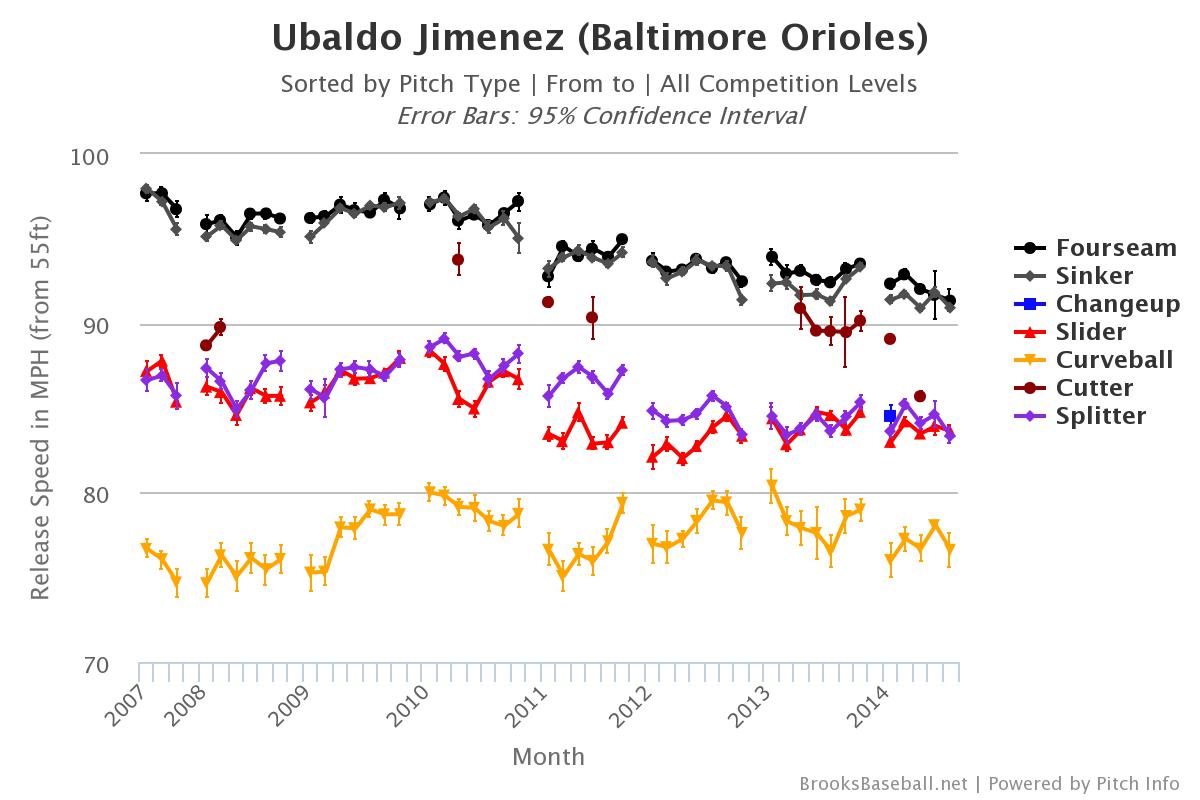 You will notice peaks in velocity during Jimenez’s periodic stretches of dominance and also that his present velocity is the lowest that it is has ever been. There is a connection here, specifically that it causes his entire repertoire to play down and makes his stuff easier to hit.

One way to quantify this is through Fangraphs’ pitch value statistics. In short, these numbers tell us the effectiveness of each pitch, in runs above or below average per 100 pitches. It’s a bit dangerous to isolate aspects of a pitcher’s repertoire, but these numbers at least give us a general sense of the changes in effectiveness of the various pitches in his arsenal.

(Note: I have omitted changeups and cutters from this data set as Jimenez has only thrown those pitches a combined 67 times in his career)

Jimenez’s fastball actually hasn’t been as bad as the deceased velocity suggests it should be, which may be due to his increased reliance on the sinker instead of the four-seamer, but his slider and curveball have been very poor this season. Somewhat surprisingly, both the velocities and movement of his off-speed pitches have not dropped nearly as much as the fastball, but I believe that the lack of fastball velocity plays a significant role in his demise. If a batter faces a pitcher capable of consistently throwing in the upper-90’s, he will have to gear up for the fastball and will be able to be beaten by an off-speed pitch more easily. Contrarily, if the pitcher only throws about 90 MPH, the batter will have more time to identify and hit an off-speed pitch, even if the off-speed pitches are of similar quality.

Inside Edge and the Orioles' Outfield

At his best, Jimenez is effectively wild. He may not have great control, but he could be effective blowing an upper 90’s fastball by a hitter and then fool them with a pitch 15 MPH slower than the heat. Now that he is no longer able to blow upper 90’s fastballs by hitters, his breaking pitches are being exposed and hit around. Opposing hitters have a .329 batting average and .481 slugging percentage against his slider and a .455 average and .818 slugging against his curveball. In order for Jimenez to return to form, he will need to find a better primary pitch that keeps hitters off of his breaking pitches (i.e. throw his fastball harder or more effectively) or develop better breaking pitches that generate swings and misses more than 9.28 percent of the time for the slider and 6.15 percent for the curveball. Perhaps the move to the bullpen will help him do so, as his stuff could play up in a shorter stint, but he is presently a far cry from the pitcher who started the 2010 All Star Game or the pitcher the Orioles thought could pitch near the top of their rotation this season.

Dan Weigel is a Featured Writer at Beyond the Box Score and an Author of Minor League Ball. You can follow him on Twitter at @DanWiggles38.