In his third full season in the show, the Arizona southpaw might have turned the corner. This doesn't compensate for the team's horrid 2014, but it could mean that he'll help them in the future.

The Diamondbacks stink. If you think differently, you're in denial. FanGraphs projects them to win 68 games, the third-lowest theoretical mark in baseball. (Luckily, the Rockies are even worse, so the Snakes shouldn't have to worry about hitting the bottom of the NL West.) With the sixth-worst offense in the majors to accompany the sixth-worst pitching staff in the majors, this club could probably use some upgrades in a few different areas.

Let's focus in on the latter group — specifically, the rotation. Thus far, it has fared even worse than the bullpen: FanGraphs has its collective WAR at 6.5, a pathetic total that only tops three other teams. Want to base your judgment on runs allowed? That puts their WAR at 2.6, moving them down a spot in the hierarchy. However, neither of these neutralizes the notoriously volatile statistic known as HR/FB%, in which the Diamondbacks place second in MLB. If you remove that from the equation and use park-adjusted xFIP, they jump up to a respectable 11th.

So maybe Arizona has a decent set of starting pitchers. Or does it? Of the eleven hurlers who have taken the hill for them so far, only four have been above-average by xFIP. Brandon McCarthy — whom G.M. Kevin Towers shipped to the Bronx for peanuts — gave them 109.2 innings of 77-xFIP- ball. Mike Bolsinger posted an 87 figure in nine starts, but hilariously bad luck (he had a 143 ERA-!) earned him a demotion. Earlier this month, Andrew Chafin made a spot start in which he put up a 91 xFIP-; after that, he joined Bolsinger in Triple-A.

And the fourth solid starter, he whose 93 xFIP- not only ranks 29th out of 95 qualifiers, but represents one of the only bright spots of Arizona's dismal 2014 campaign? None other than Wade Miley.

Even if you don't follow the Diamondbacks, you might be aware of Miley; after all, 'twas a mere two years ago that he nearly won NL Rookie of the Year. Since then, he appears to have melted down: His ERA rose from 3.33 that year to 3.55 last year to 4.30 this year, while the standard for pitchers decreased constantly. Of course, appearances can deceive, and as his aforementioned xFIP- proves, this rings true for him.

So how has Miley elevated his game? Primarily by getting more strikeouts while keeping his walks low, and legitimately too — Mike Podhorzer's xK% and xBB% equations support his better numbers:

Miley has derived this success from more whiffs, as the percentage of his strikes that are swinging has risen to 16.8% (from 13-14% in prior seasons), whereas his other statistics haven't changed significantly.

PITCHf/x data reveals the cause of this. First, to the usage graph: 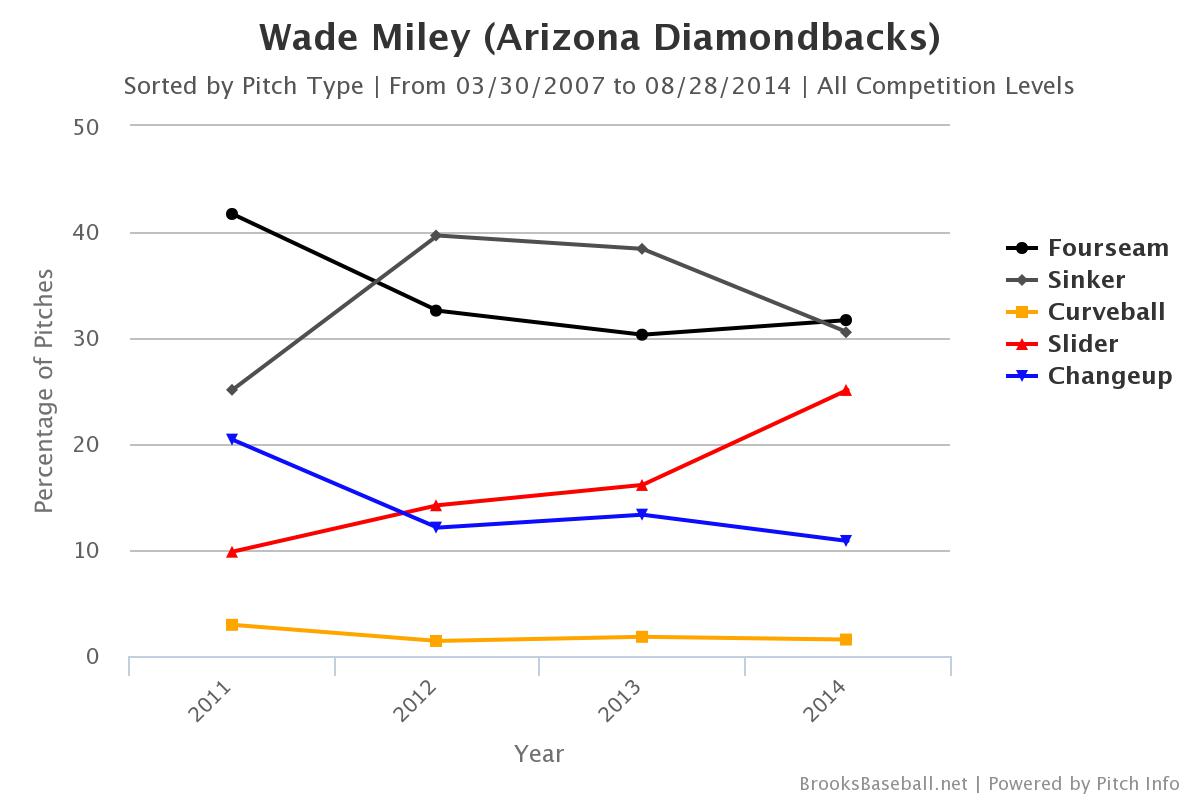 Like his NL West cohort Clayton Kershaw, Miley has notably thrown more sliders this year. That pitch hasn't seen an increase in efficacy, but it still bests anything else in his arsenal: 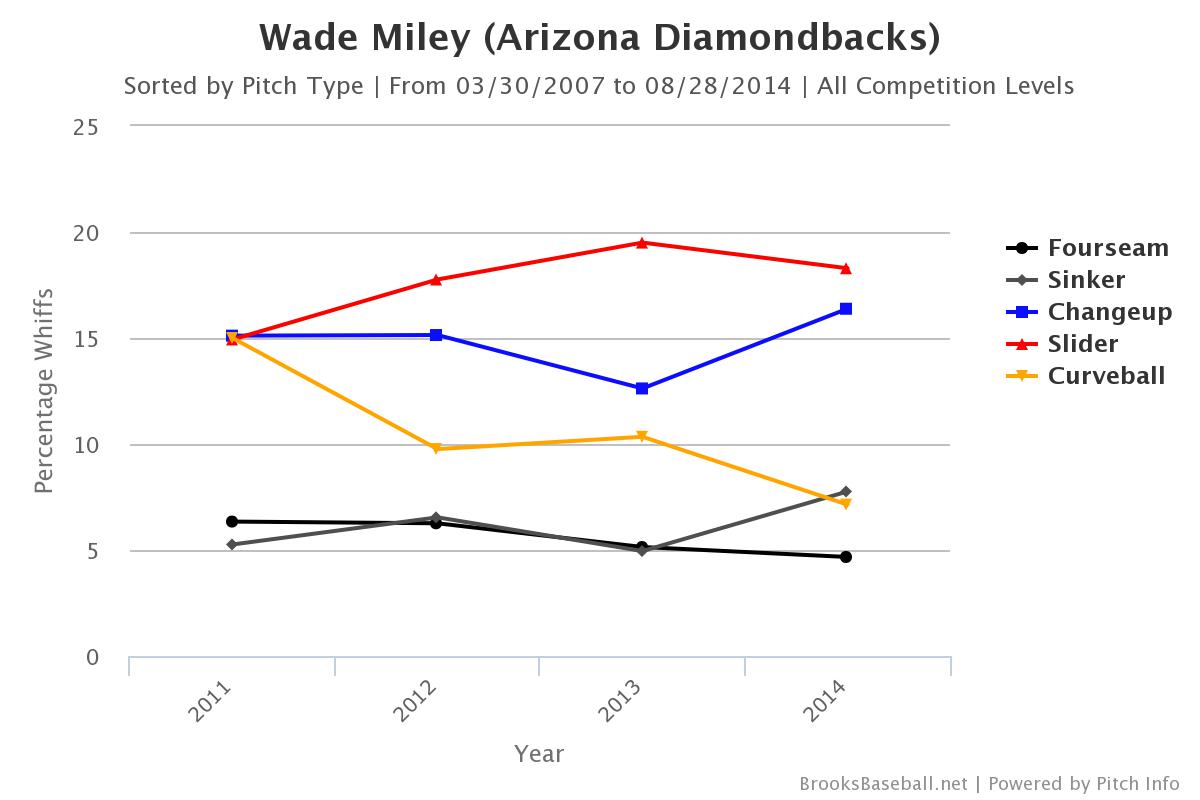 And of course, a little extra velocity can't hurt: 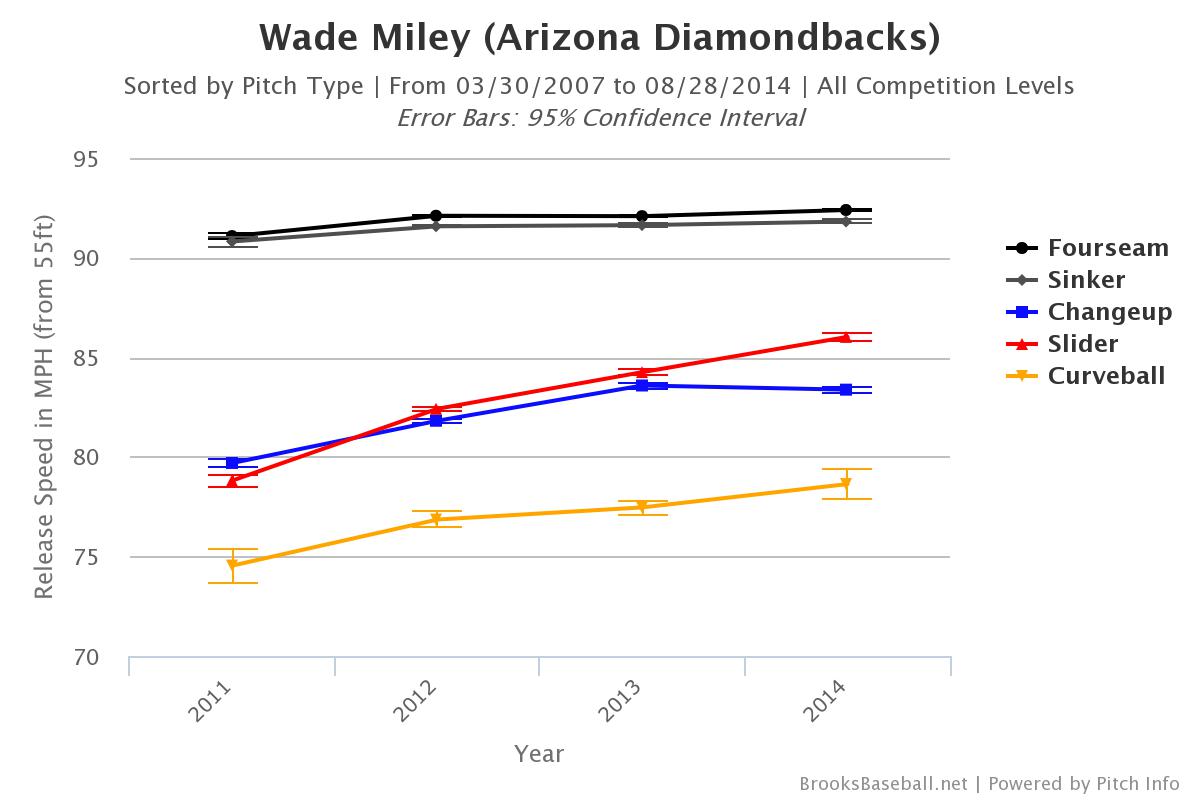 It's also important to note that, after spiking last season, Miley's ground ball rate has stayed high (50.6%) this year. This comes back to the slider as well: 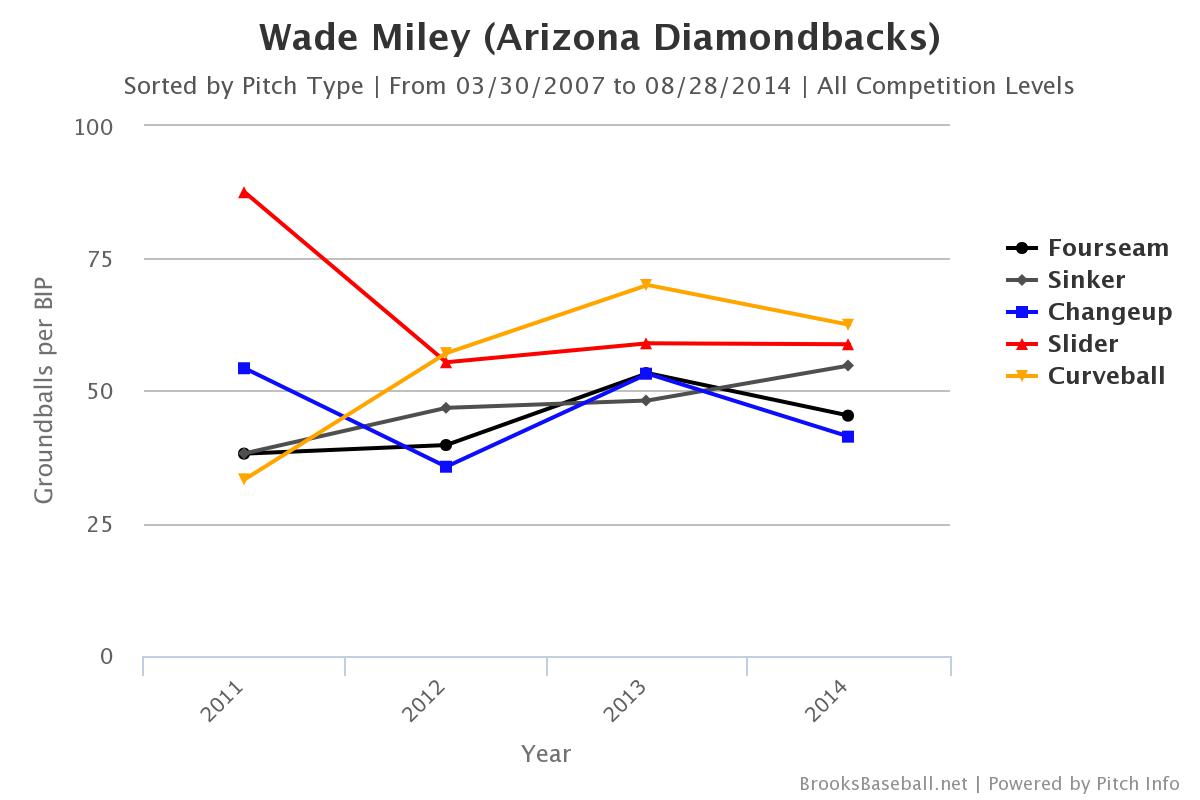 As with whiffs, Miley's ground ball rate on his slider hasn't grown, but its uptick in usage has made up for fewer grounders on three of his other pitches.

So, there you have it. Evidently, Wade Miley came to his senses last offseason, realized that his slider worked rather well for him, and decided to throw it more often going forward; the results (or the peripherals, I suppose) speak for themselves.

Rookie outfielder David Peralta and veteran right-hander Trevor Cahill are giving the Diamondbacks a glimmer of hope despite a season that everyone would just rather forget.

But why does this matter? After all, the Diamondbacks won't go anywhere this year. As October approaches, shouldn't us pundits focus on the playoff teams, instead of these also-rans?

Well, yeah, I guess. However, Arizona might make some noise in 2015 and beyond. Perennial MVP candidate Paul Goldschmidt should return from injury, as should 2013 breakout Patrick Corbin. Uberprospect Archie Bradley inches closer to the show as I write this, and he may contribute down the stretch. Along with several wild cards (A.J. Pollock, Ender Inciarte, and Chris Owings, to name a few), this roster could turn some heads.

More importantly, the organization will probably make some changes at the top. Towers and manager Kirk Gibson don't have much job security, if any (the former's optimism notwithstanding), and if they leave, it could mean the team moves toward more analytic player evaluation and less...grit. The hypothetical new executives would, hopefully, recognize the authentic steps forward that Miley has taken; subsequently, they wouldn't spend their limited payroll on an upgrade.

For the Diamondbacks and their fans, Wait 'Till Next Year has been the mantra for far too many years. In this case, though, it might hold true, and Miley could play a role in that.

All data courtesy of FanGraphs, Baseball-Reference, and Brooks Baseball, as of Saturday, August 30th, 2014.