How to get a hit against Clayton Kershaw

Kershaw is the most dominant pitcher in baseball. For Major League batters that makes their job very difficult. This then is Beyond the Box Score's "How to hit against Clayton Kershaw for Dummies," also known as an advanced scouting report.

Share All sharing options for: How to get a hit against Clayton Kershaw

The intro is a bit silly, but it's important to note that Kershaw is probably pretty low on the list of opposing pitchers that a batter might want to face. Ryan Romano recently detailed all of the reasons that this season has been such a good one for Kershaw, and why we should all bow down and praise him for the pitching god that he is. I won't waste time on explaining how good Kershaw is. You should just take 10 minutes and read Ryan's article. I'll wait.

Ok good, now we're all on the same page--Clayton Kershaw is ridiculously good. Eric Hosmer agrees, adding that Kershaw's $215 Million contract was "[not] enough money." So if you're an opposing hitter, how do you walk up to the plate and avoid having this:

happen to you? It's easier said than done given that Kershaw strikes out 1.2 batters per inning. Let's have a look at how you should approach an at bat against Kershaw, through the lens of PITCHf/x*:

It's probably a fastball. Right around 85% of the first pitches that Kershaw throws are four-seam fastballs, and they typically come in at 93.71 mph. Kershaw doesn't blow anyone away with his velocity, but a mix of deception and command plays up his fastball making it tough to hit.

This is probably a good time to swing, to be honest. Opposing hitters have posted a triple slash line of .267/.276/.419 against Kershaw's first pitch in a plate appearance this season. Granted, that OBP is terrible, but that's basically because it's pretty much impossible to walk after 1 pitch. So the OBP is entirely driven by HBP. That line may not seem so great, but compare it to the .157/.181/.176 triple slash lefties or .201/.236/.321 triple slash righties have posted against the Dodgers' ace this season and it starts looking pretty good.

Odds are the pitch will be in the lower left quadrant of the strike zone (down and in to righties, low and away to lefties) because that's where Kershaw's first pitch fastballs go most frequently: 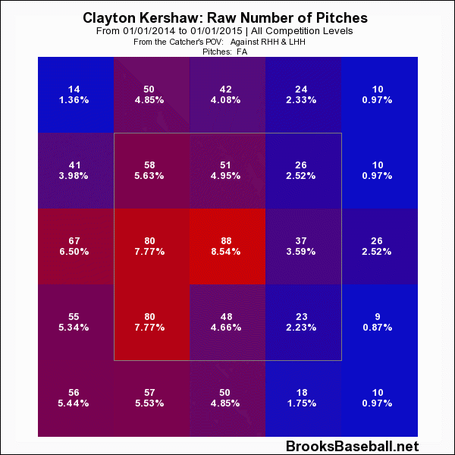 In fact, 56.4% of Kershaw's fastballs in an 0-0 count end up in those 9 quadrants making up the bottom left portion of the zone. That means that when you walk up to the plate and Kershaw begins his wind up, there's a 47.94% you'll see a fastball in the lower left portion of the strike zone. Be ready for it.

I'm Ahead in the Count. What Now?

This is most excellent news. Actually, I should temper that enthusiasm as opposing batters have hit only .219/.349/.314 against Kershaw when ahead in the count. Still, being ahead is good, and this means that you arguably have a leg up on Kershaw.

When ahead in the count you're getting one of two pitches. It's either going to be a fastball (about two thirds of the time) or a slider (the remaining one third). Again, Kershaw's fastball comes in around 94 mph, and his slider has averaged 88.18 mph so far in 2014. That's not too drastic of a difference, so I'd recommend that our batter looks fastball with the hope of reacting to a slider. So where in the zone are we looking? 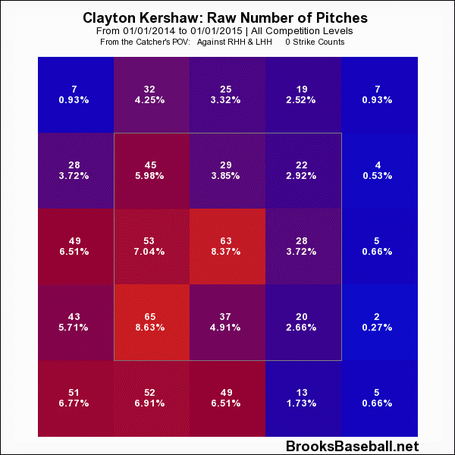 Looks familiar, doesn't it? When the opposing batter is ahead (technically I've included 0-0, 1-0, 2-0, and 3-0 here) there is a 61.36% chance that the pitch will end up in the bottom left portion of the zone. Again, that percentage comes from the 9 quadrants making up the lower left section of the zone. Breaking that down by pitch means there's a 41.11% chance you'll see a fastball down there, and a 20.42% chance you'll see a slider down there.

One piece of advice. If it's a fastball, swing away! If it's a slider, let it go. Why? well Kershaw's slider is much more likely to end up below the zone going for a ball than his fastball is. You can clearly see that in the charts broken out by pitch here (slider here and fastball here).

You're in luck. Kershaw just became WAY more predictable. If it's a 3-0 count (there have been 16 in 2014) then you're getting a fastball. In fact, you should probably get ready to swing as 62.50% of the pitches (remember, all fastballs) were strikes. 25% of these fastballs were right down the middle!

If Kershaw has managed to get a strike against you during the at bat, but you're still up 3-1: well, you're still in good shape. There's better than a 92% chance you're getting a fastball here, with Kershaw throwing only 2 sliders in 3-1 counts all season (28 opportunities). Again, you're swinging. Hopefully you make contact (opposing hitters have hit a single, a double, and a home run in 9 at bats ending on a 3-1 count) which is pretty much the best line you'll see against Kershaw (outside of 3-0 which is a sample size of 1).

Let's say it's 3-2. Well, now you're in trouble. Opposing batters have hit just .125/.327/.200 after full counts against Kershaw in 2014. Kershaw has thrown 64 pitches in full counts so far this season, with the fastball and slider making up more than 96% of those deliveries. The problem? 53.13% were fastballs, and 43.75% were sliders. This is the most even split thus far, and as a result the most difficult for the hitter. The best advice I can give you is that it'll probably be down in the zone, whatever pitch it is that he decides to throw: 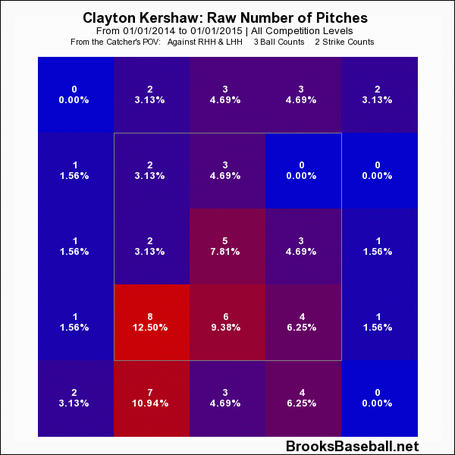 What if Kershaw Gets Ahead?

To this point we've really only had to worry about two pitches: the fastball and slider. Now we add in the complicating factor of Kershaw's curveball, the big bender that buckled Justin Upton's knees above. To further complicate matters, Kershaw is roughly equally likely to throw any of his three main pitches when ahead in the count. The one thing you can count on is that he'll double down on the same location we've mentioned multiple times: 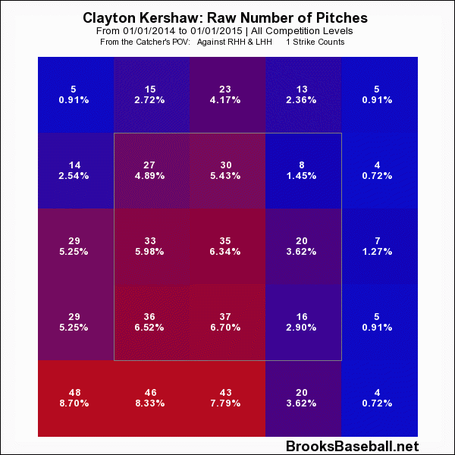 Again, more than 60% of his pitches in this situation will be in that zone, with a roughly equal chance that it might be a fastball, slider, or curveball (74.48 mph). That's not only a big spread in velocity to manage, but a big spread in potential movement as well: 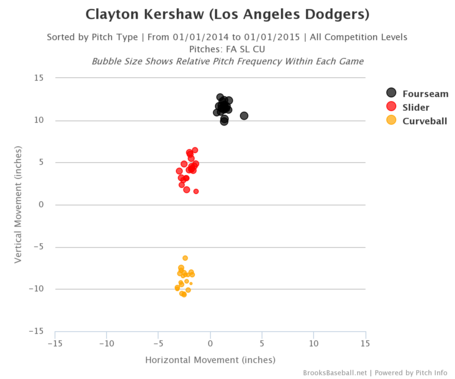 Getting a hit against Clayton Kershaw is terribly difficult. Luckily he's pretty predictable. On top of that, Kershaw doesn't change his approach at all depending on the handedness of the batter, so all the information in this primer is valuable to righties and lefties alike.

So with that I'll say good luck. And swing at the first pitch. Unless you know for certain it's a ball, in which case you should swing at the next pitch. The deeper you go into the count with Kershaw, the less predictable he becomes.