Who has hit the longest home run at Citizens Bank Park in the HitTracker era?

Evan Gattis annihilated this baseball. In the Atlanta Braves 3-2 loss to the Philadelphia Phillies, Gattis was the only one who could produce any offense, bombing two balls past the outfield fences against Cole Hamels. The first home run in particular sailed much farther than anything Citizens Bank Park had seen before in the HitTracker era (since 2006), traveling 486 feet en route to the upper concourse level of the stadium.

Drafted in the 23rd round of the 2010 draft, Gattis has been a major success story for the Braves. He advanced through Atlanta's minor league affiliates, demonstrating considerable hitting ability with a strong feel for the bat and the power to generate long home runs. The sleeper candidate broke out at Class A Rome, batting .322 with 22 home runs in 2011. After that performance, he moved quickly through the minors and won the backup catcher position in spring training last season. Gattis lit up Turner Field (and many other stadiums) as a rookie sensation and to much fanfare. It was on September 8th, 2013 he blasted the 486 foot home run, the longest of the entire MLB season, proving himself to be worthy of the everyday backstop role for the Braves.

If I had to guess which pitcher gave up the longest home run of 2013, it certainly wouldn't be Cole Hamels. In fact, I probably would've named about 200 other pitchers before I would've named Hamels. Already one of the premier pitchers in baseball, Hamels had been a consistent anchor of the Phillies rotation since 2006. And that's not to say that his 2013 season wasn't good, which it was, Hamels just happened to suffer through one painfully bad home run. Last season, he maintained a 3.60 ERA and amassed 4.1 fWAR, a considerable amount. Nonetheless, Hamels happened to release a 91.7 mph fastball to Gattis, and he took advantage of it. 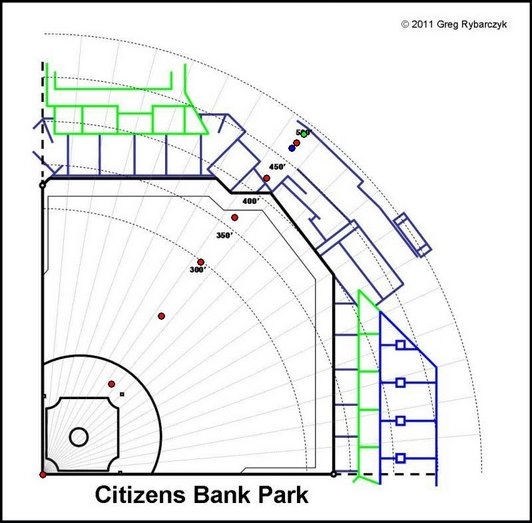 Evan Gattis watched on as Chris Johnson, the incumbent Braves third baseman, struck out against Hamels after battling through an array of changeups, fastballs, and cutters. He stepped up to the plate, swung the bat over his shoulder to get in position, and took Hamels' first pitch, a curveball, for a ball (that should have actually been a strike). Hamels began to wind up for the second time and released a four-seamer to the upper-right hand corner of the batter's box. The subsequent swing of the bat and classic wooden "whack" told Hamels that this ball wasn't coming back. Gattis unloaded on the pitch and blew the ball way past the outfield (video here).

With one swing of the bat, Gattis gave the Braves an early one run lead. Later in the game, Hamels served up another curveball to Gattis, and he took it deep again (Cole Hamel's reaction is priceless). Unfortunately, that was all the offense the Braves could muster against one of the league's better starters.

This home run was a definite outlier among Gattis' others. As a result, the ball traveled 77.7 feet (or 19%) farther than his average 2013 home run. Similarly, the ball came off his bat at 113.9 mph, 8.2 mph faster than usual. With all that extra speed, the baseball had the acceleration to zoom onto the concourse, adjacent to Citizen Bank Park's own Tony Luke's franchise. 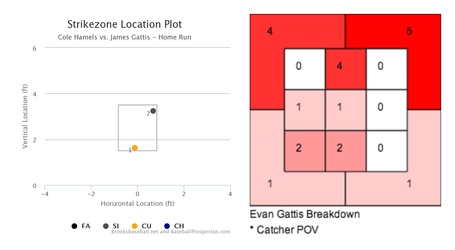 The reason Gattis was able to hit the ball so far was because it was served up directly to his favorite zone. As you can see from the Baseball Savant graphic on the right, Gattis heavily prefers slamming home runs on pitches left in the upper part of the batter's box; 13 of his 21 home runs originated there. The pitch Hamels threw just happened to be in that favorable zone with very little movement besides a slight downward arc.

When you look at all of Evan Gattis' balls in play from 2013, it would be hard to notice the small red diamond under the word "Fielder" in the graph description; however, upon closer examination, you'd be able to see that that diamond is in fact a home run and not an erroneously placed mark. He barreled the ball an incredible distance and much farther than any other ball he put in play. Another noticeable trend is that Gattis has a strong pull-oriented swing, as almost all of his home runs landed past the left field fences. 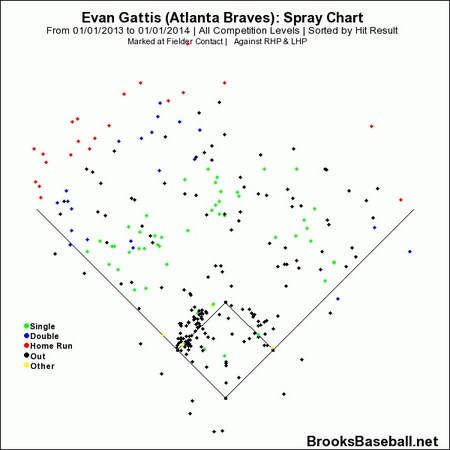 Evan Gattis connected on a pitch left up in the zone against an otherwise great pitcher at Citizens Bank Park. Although the Phillies won the game, Evan certainly won the night with his two impressive jacks.