Jorge Soler: Next in the long line of Cubs prospects

Another week, another Cubs prospect brought up to the majors. This week's selection is Jorge Soler. How might he develop?

Share All sharing options for: Jorge Soler: Next in the long line of Cubs prospects

There must be something about Mondays this summer because the Cubs keep announcing prospects who will be brought up to join the team. This Monday was the announcement of Jorge Soler, and I'll begin with what the experts said -- this is from Baseball Prospectus 2014:

. . . Soler remains a top prospect with a prototypical right fielder's tool kit: speed, a laser arm and the potential for 30 knocks at his peak.

In the same publication Jason Parks had Soler ranked #45 in his top 101 prospects:

He will be tested by advanced arms capable of effectively working east and west, but most evaluators see enough discipline in the approach to believe Soler will be able to find his pitches and punish them.

He's in his third year with the Cubs after having spent two years in the Cuban Serie Nacional, but between injuries and other issues he has made just over 600 plate appearances. The arbitration clock isn't an issue since he's signed for $30 million through 2020, so it's entirely within the Cubs' discretion as to when to bring him up.

While both Baez and Alcantara have demonstrated power, strikeout rates like this are unsustainable. Soler has shown selectivity in the minors, and while he might swing somewhat freely upon his call-up, he will probably revert to his good eye sooner rather than later. This chart shows the KO/BB ratio by the number of years in a player's career: 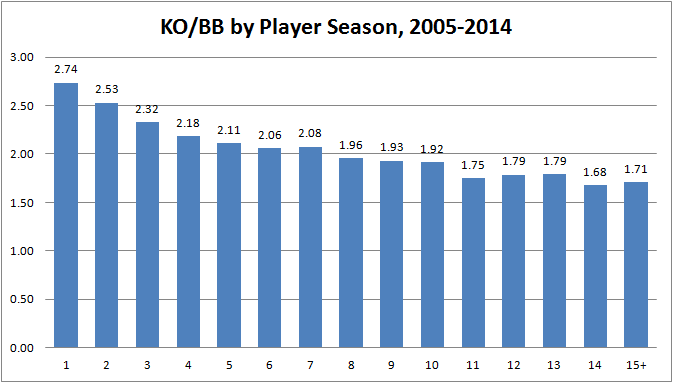 This is some selection bias in this chart in that if a player continues to strike out ten times as often as he walks (unless he's Javier Baez) chances are he won't make it to seasons two, three or four, but generally speaking, more experience leads to increased selectivity at the plate. This gives great hope for an increased number of walks for Alcantara and Baez, and shows how far ahead Soler is in terms of his willingness to take a walk..

Being the Cubs fan I am, I am constantly reminded this could be their lineup very soon:

I also left out Mike Olt, Welington Castillo and Junior Lake and do my best to repress thoughts about Edwin Jackson. Not all of these players will end up wearing a Cubs uniform, and some won't pan out. The Cubs have the potential to be a version of the 2013 Cardinals, a home-grown team with select free agent acquisitions like Matt Holliday and Carlos Beltran and a team built for a sustained run of success.

It's been a long couple of years for Cubs fans as they've been told over and over again to show patience. This isn't difficult for a fan base that hasn't celebrated a World Series championship since 1908, but attendance is finally starting to become a real issue -- this graphs shows Cubs attendance since 1980:

There are numerous factors that affect attendance at both Wrigley Field and throughout baseball, but there's little doubt the Cubs woes since they last made the playoffs in 2008 played a factor in the decline. The Ricketts family purchased the team at the height of the attendance marks and counted on that revenue stream to finance both team operations and Wrigley Field renovations. At some point even the most die-hard Cubs fan will stay home and wait until the team gets better again to go to the game.

Will the Cubs play the Astros in the 2017 World Series? It's impossible to say, but the brain trust of Theo Epstein and Jed Hoyer appear to have obtained the talent necessary to make the Cubs relevant again. Will Jorge Soler be the potential star that Javier Baez could develop into? It's too soon to state definitively, but he could end up being an extremely valuable piece, the solid hitter who plays good defense. Teams need players like that too.

All data from Baseball-Reference. Any mistakes in amalgamating the data are the author's.