Tracking playoff odds across the season

Playoff odds projections are a great tool for assessing a team's chances of making the playoffs. Here we look at how they have fluctuated across the season.

Share All sharing options for: Tracking playoff odds across the season

We are nearing the final month of the 2014 season. The playoff races will be finalized over each team's next 30-35 games. Where does your team stand? How likely is it that they will make the playoffs? How did they get to that likelihood?

To answer the first question you can simply take a look at the standings. To answer the second question you can rely on one of the playoffs odds projection systems. These playoffs odds reports are available at FanGraphs and Baseball Prospectus. The odds are based on thousands of simulations of the rest of the season that use each team's year-to-date record, year-to-date run differential, current roster, and playing time projections. The odds number you see is the percentage of times that a team achieved a given level (e.g., winning the division, winning a wild card spot, reaching the division series) in the simulated seasons. Together the standings and playoff odds provide a good estimate of your team's likelihood of playing in October.

But answering the third question, or how your team got to this point, is more difficult. You could see changes over short periods (e.g., 1-day, 1-week) but gaining a perspective on a team's odds fluctuation over a longer period was not readily available.** That changed when FanGraphs recently released historical playoff odds. Now you can see playoff odds in the moment, but you can also go back to any date in the season and see where your team stood.

Using the FanGraphs historical playoff odds feature I compiled the FanGraphs Projections Mode data for every date this season beginning with preseason projections and ending on August 25th. These projections use a combination of the Steamer and ZiPS systems and the FanGraphs depth charts. Using these data I created plots for each division with the odds of making the Division Series (DOFF). Any of the playoff odds components can be used, but I tend to focus on the DOFF odds because (for me) that is what represents making the playoffs. Below each plot is presented with a table of summary statistics and a discussion of the evident trends in light of critical events. 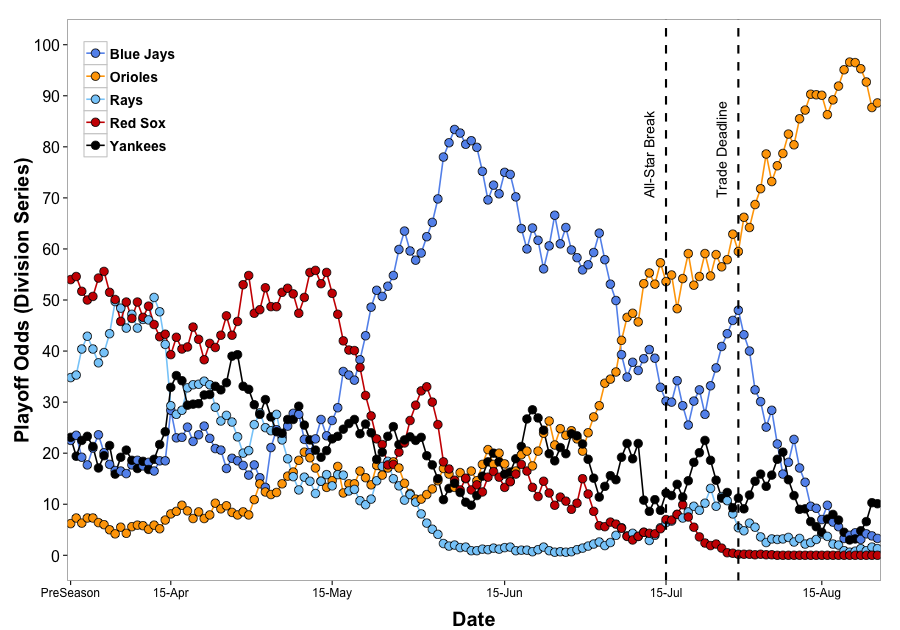 That is a serious sadness slope for the Blue Jays. Since the beginning of June (their peak odds) they have been steadily lowering their playoff odds. A month later they placed Edwin Encarnacion (July 7) and Adam Lind (July 11) on the disabled list and the slide continued. They came back to life for a couple of weeks following the All-Star Break but have resumed falling toward the zero point since the trade deadline. The Orioles appear to have things locked up. A steady rise from low preseason expectations has them in place to win the division. Regardless of whether their performance in 1-run games is sustainable going forward or represents random variation, the wins are banked and have helped put a gap between them and the other teams in the division. Finally, the odds of the preseason favourite Red Sox and Rays held steady for a while (primarily based on initial expectations) but by mid-May poor on-field performance became too much and the projection for them making the playoffs became unfavourable. 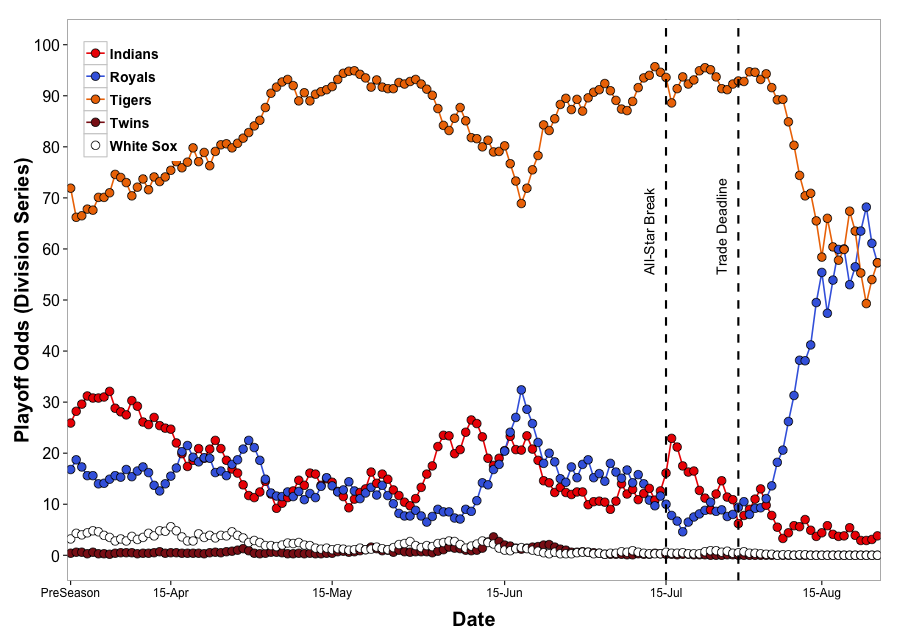 For the most part this division has been pretty boring. The Tigers, preseason favourites, were in control. In fact one might even be able to find tweets from May/June containing ideas of playoff plans from Beyond the Box Score Associate Managing Editor and huge Tigers fan Neil Weinberg. But then just before the trade deadline and immediately afterward things have begun to go downhill for the Tigers. Is it possible that Austin Jackson (.311 wOBA) and Drew Smyly (4.08 FIP) were the glue holding this team together? Or was David Price sent by Rays' GM Andrew Friedman to sabotage the good times in Detroit? Doubtful. But you never know for sure. Either way the Royals have charged up the standings with solid pitching and defense, and a number of timely hits. As of August 25th both teams had a 57.3% chance of making the division series. The rough news for the Indians, Twins and White Sox is that the Tigers and Royals will likely be good again next year. There is a lot of work to do for the teams at the bottom of this division. 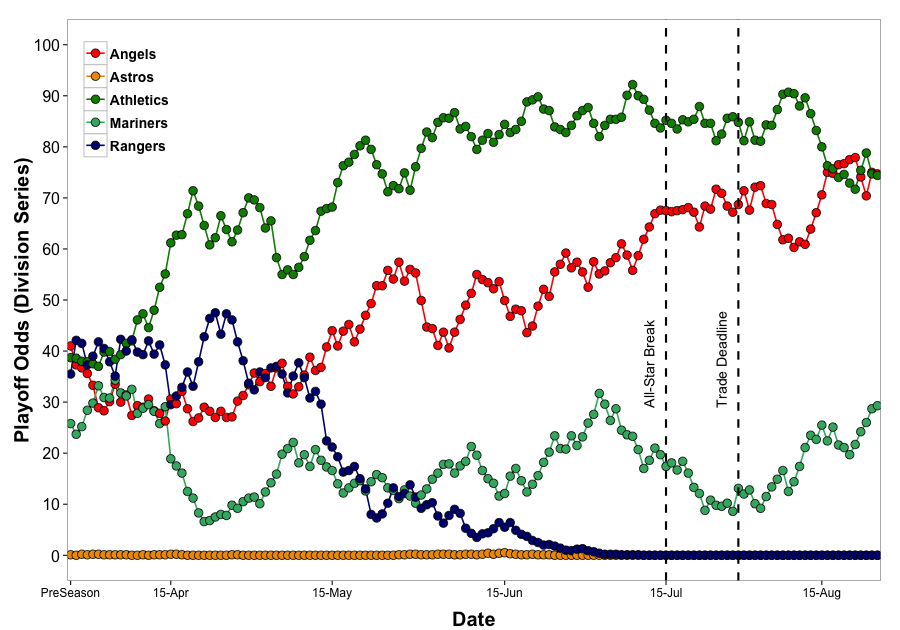 At the beginning of the season this looked to be the most interesting division. Three, maybe four teams were projected with decent odds for making the playoffs. The Astros were never expected to compete for a playoff berth. But on June 15th they had their glimmer of hope. The Rangers looked to be serious contenders but then got absolutely crushed by injury. Go and look at their transaction list and the injuries involved. The Athletics have been front-runners for most of the year. Their run differential is well above that of any other team. Yet, recently the Angels caught them and it is now a real two-team race for the division crown. The really interesting thing about this division is that there is an outside shot that 3 teams (Athletics, Angels, Mariners) from the division can make the playoffs (if we include the wild card play-in game). While that is interesting, having two teams from the same division separated by a number of wins in the standings play each other in a 1-game playoff seems a bit ridiculous. Given that these two teams are in the same division, they will have played almost the exact same schedule. Any difference in the standings cannot be attributed to differences in divisional quality. This means that over a 162 game season one team was clearly better at the same task. Yet the team that performed better could miss the real playoffs because of having to play one extra game. Moreover, they might have to compete against one of the best pitchers in the game in that playoff game. 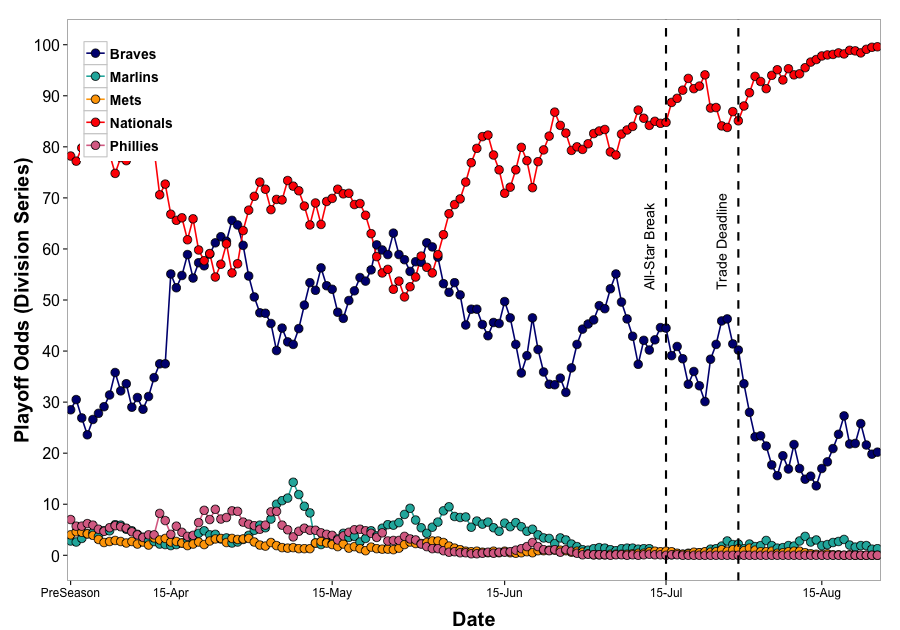 This division is a bit like the AL Central. There is a clear favourite, a second contender, and a group of also-rans. The difference here is that the Nationals played poorly at the start of the year. In mid-May they were only one game over .500 (20-19 on May 13). This coincides with when the projections suggested that they and the Braves had roughly equivalent chances of making the division series. Since that time the Nationals have played more like they were projected to and have gained solid control over this division and their likelihood of making the division series. The Braves have a shot at making the division series but it will need to be through the wild card game as the projections have the Nationals winning the East in 98.9% of simulations. While the Marlins played better than expected for much of the year, the FanGraphs projections did not ever consider them a real playoff contender. Similar to my comment about the bottom ranking teams in the AL Central, the rough news for the Mets, Marlins and Phillies is that the Nationals and Braves are likely to be solid teams again next year. 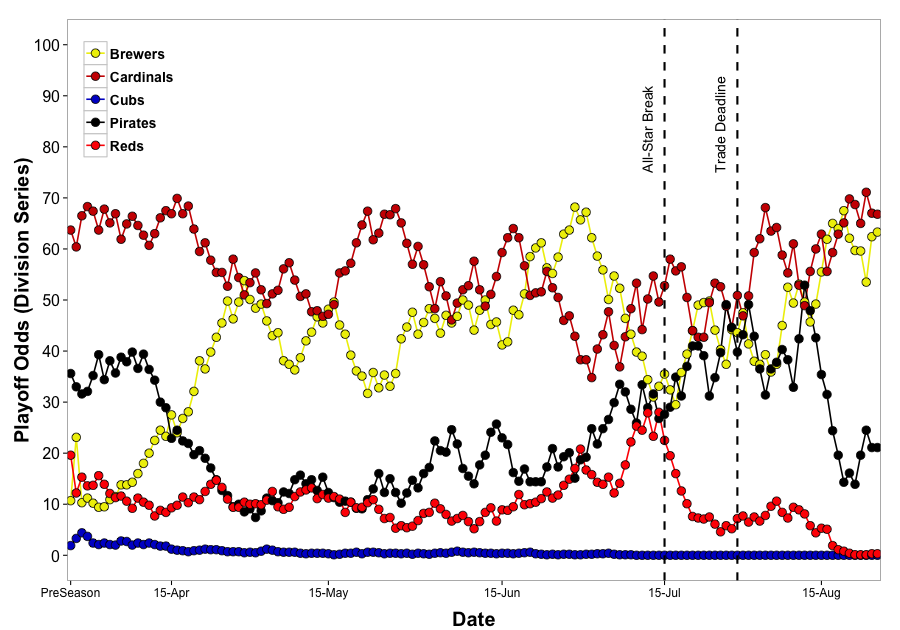 The biggest story in this division is the Brewers. Preseason expectations were low for the Brewers. But a 20 - 7 April did a lot to boost their projected playoff likelihood. The FanGraphs projections have pretty consistently considered the Cardinals as the best bet from this group to make the division series. The Pirates' poor play to start the year (10 - 16 in April) put them in an early hole. But they gradually ascended to the level of the Cardinals and Brewers in early August. Then on August 11th Andrew McCutchen was placed on the disabled list with a fractured rib and... well you can see how the Pirates projection has plummeted since that date. The Cubs are an exciting team for the future. It seems like they call up another exciting prospect every week. It will be really interesting to see if their preseason projection is much higher next year than it was this year. 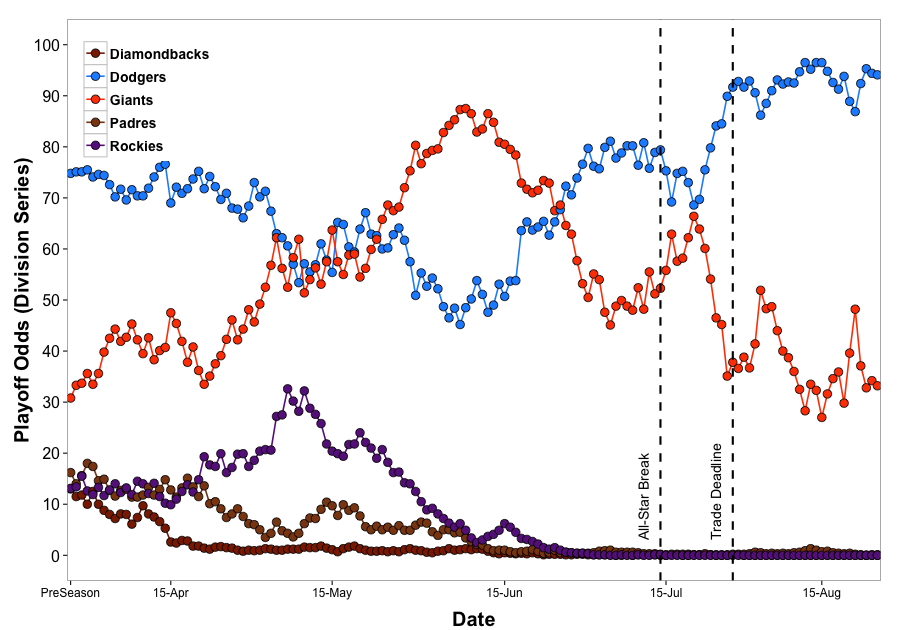 The NL West is another division that has essentially been a two-team race according to the projections. The preseason favourite Dodgers' odds declined slightly to the middle of June, but have increased ever since to their current level. The Giants projections have mirrored the Dodgers: gradually increasing to mid-June and then continually declining to the current level, with a slight bump after the All-Star break. If the Giants want to get into the playoffs, the projections suggest they will need to do so through the wild card (a spot they currently hold), as the Dodgers win the West in 92.5% of the simulations. The Rockies' fairly strong play in the first two months affected their projection but then Jonah Keri wrote about them and they became woeful on-field. This division is also interesting in that it has two teams whose peak playoff odds came right at the beginning of the year. The Diamondbacks odds began falling immediately. Literally. And the Padres peaked after they won their first game of the season but have been downhill ever since.

These plots provide an interesting way to get an overview of trends in performance across the season. The projections incorporate both the expected talent level of the teams and their actual on-field performance. So a 10-game win streak for a team, regardless of how unlikely, contributes wins in the standings and become factored into future playoff odds. For a few teams, changes in playoff odds projections could be related to unique events (e.g., injury to critical player(s)), which might provide interesting avenues for analysis and roster construction considerations. If these projections are correct, the division series will involve the Orioles, Royals/Tigers, Athletics and Angels in the American League, and the Nationals, Cardinals, Dodgers and Brewers in the National League. It will be a lot of fun to see how it all shakes out.

** It came to my attention late in the process of putting this work together that MLB.com actually has interactive plots for the Baseball Prospectus playoff odds projections. I tend to not use MLB.com for statistics or standings so I missed them. In any case you can find them here. The interactivity is excellent. The trends are similar to the FanGraphs projections plotted above.