The time between pitches is increasing -- does it lead to better performance?

Share All sharing options for: Does more time between pitches deliver better results?

Last Thursday I was watching the Cubs play the Giants in the official game after they finished playing the suspended game. Due to a rain delay that pushed back the beginning of the suspended game by a couple of hours, the official game didn't start until around 8:00 pm CDT, or about an hour after the scheduled start. Since the teams had been at Wrigley for most of the day as well as it being getaway day for the Giants, I thought maybe they'd be in a bit of a hurry to get the game played.

Cleanup hitter Pablo Sandoval came to the plate with one out and runners on first and second. He tapped his bat a couple of times, pulled on his wrist bands, adjusted his cap, adjusted, er, other parts of his uniform, cleaned his spikes, tapped  his bat a couple more time and then determined he was ready to take a pitch. I pick on Sandoval, but it could be anybody -- it seems like there's more dead time between pitches.

This chart shows the increase in game length over time: 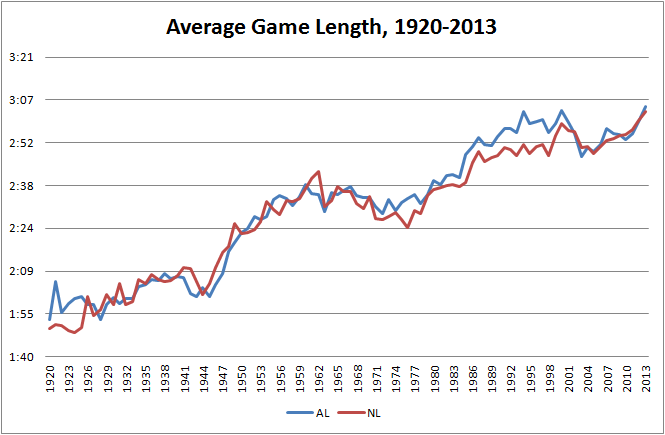 Adapted from data at Baseball-Reference

There are any number of reasons for increased game length -- more pitchers, more substitutions, more offense and others, but the time hitters take between pitches is increasing. It's one thing to adjust after a close pitch, but batters are stepping out after every pitch and adjusting everything.

These are the pertinent MLB rules on time between pitches for pitchers:

The intent of this rule is to avoid unnecessary delays. The umpire shall insist that the catcher return the ball promptly to the pitcher, and that the pitcher take his position on the rubber promptly. Obvious delay by the pitcher should instantly be penalized by the umpire.

These are the rules for hitters:

Once a batter has taken his position in the batter’s box, he shall not be permitted to step out of the batter’s box in order to use the resin or the pine tar rag, unless there is a delay in the game action or, in the judgment of the umpires, weather conditions warrant an exception.

Umpires will not call "Time" at the request of the batter or any member of his team once the pitcher has started his windup or has come to a set position even though the batter claims "dust in his eyes," "steamed glasses," "didn’t get the sign" or for any other cause.

It seems there's a bias toward hitters since pitchers are explicitly stipulated to throw the pitch within 12 seconds of the batter being ready, but the batter has far more leeway in preparing himself.

* Want to know more about my methods and data set? Click here for a Google Doc that goes into greater detail.

I'm not prepared to state that a slower pace leads to better results because there are too many confounding variables at play, but it is interesting to see a more deliberate approach apparently delivers positive results. This chart shows the faster and slower pitchers:

There does appear to be a clear line of demarcation between relievers and starters, possibly explained by the game situation -- the closer the game, more likely the more time between pitches. This next chart shows the hitters:

Part of the difference has nothing to do with pace but a reflection that wRC+ is a better measure of production, which is one reason why the hitters appear to separate between power hitters taking more time and singles hitters taking less.

I would love to see pace data prior to 2007 to see if time between pitches has increased, and if so by how much. Even in the span for which the data is available the pace has increased from 21.6 to 23 seconds -- what's 1.4 seconds between friends anyway? In a typical game with 300 pitches, an additional seven minutes. I would like to see individual pitch data to see if higher leverage situations cause more time between pitches. I would also really like to see individual match-ups to see what happens when a pitcher who takes his time matches up with a hitter who does as well. There's still so much unknown in the data available in the public realm.

There aren't many game length complaints regarding the other major sports primarily because there's activity on the field, which isn't the case with baseball. The rules exist to speed up the game but I doubt they will be enforced because a deliberate pace appears to favor both pitchers and hitters, and when something is mutually beneficial there won't be a ground swell of support to change it. Remember this the next time that 1-0 game you're watching creeps toward the three-hour mark.

All data from FanGraphs and Baseball-Reference. Any mistakes in amalgamating and processing it are the author's.