Share All sharing options for: Your guide to Clayton Kershaw's insane 2014 season

Clayton Kershaw has pitched pretty well this year, or so they say. In this case, "they" are decidedly correct: He ranks third in baseball in WAR (and second in RA9-WAR) despite missing a month with a back injury. Fawning over his stats, I noticed a few things that stood out about 2014.

1. He no longer predicates his success on beating his peripherals.

Entering his age-26 season, Clayton Kershaw had few, if any, doubters. He had won two of the past three NL Cy Youngs, and had led the majors in ERA in each of the last three years — a distinction that only a few other glorious names hold. His 2013 campaign was especially sublime, as he posted a sub-2 ERA, which hadn't happened in a while. Most people would easily dub him the best starter in baseball.

At Beyond the Box Score, we aren't most people. We strive to look at baseball through an analytic, objective perspective. We dig deeper, to see who really did well. And here's the thing: While Kershaw undeniably pitched phenomenally over those three years, he wasn't the best starter in baseball, because of two elements: park factors and peripherals.

Kershaw plays for the Dodgers, who play half their games in Dodger Stadium, which has a deleterious effect on hitters. In 2011, 2012, and 2013 — his aforementioned three-year run of superiority — it was the fifth, seventh, and sixth-best park for pitchers, respectively. Hence, while he led the majors in ERA in each of those seasons, he came in at fifth in ERA- in 2011 and third in 2012; he still beat out the competition in 2013, but by a closer margin.

But why should we look at ERA? It's a new era (no pun intended), and we use better, more advanced stats to evaluate players. Did FIP and xFIP feel as fondly about Kershaw? Not particularly: In 2011, he ranked 2nd in FIP-, and 4th in xFIP-; in 2012, he ranked 7th in FIP-, and 12th in xFIP-; and in 2013, he ranked 3rd in FIP-, and 8th in xFIP-*. Obviously, most pitchers would kill to have these spots, but the point remains: At no point was Kershaw the best pitcher in the show.

*It's worth noting that most elite pitchers will outperform their peripherals. However, Kershaw did so to a greater extent than his peers, which is why I used rankings among qualifiers.

By all accounts, Clayton Kershaw is a wonderful human being. For some reason, opposing hitters don't agree.

2. He has succeeded in many categories, to historic extents.

Now, he's first in strikeout rate (32.2%), fifth in walk rate (3.7%), and eighth in ground ball rate (54.6%). So, yeah. He has, simultaneously, improved his strikeout, walk, and ground ball rates — the three most important variables for a pitcher. I'll cover how he's done that in a second, but for now let's focus on the achievements themselves.

Earlier this year, while researching for a post on Dallas Keuchel's hot start, I stumbled across this:

Kershaw's strikeout, walk, and ground ball z-scores for 2014 currently sit at 2.88, -1.61, and 1.44, respectively. Barring a complete meltdown, he should nab this superlative with ease.

Let's focus in on the former two numbers briefly, since data for them go back much further than that of grounders. Most high-strikeout pitchers also issue their fair share of free passes, since they must work out of the zone to compile whiffs. Even those who possess good command generally don't rely on it as their asset. In other words, we don't often see a pitcher with lofty K totals and minuscule BB totals. Thus, the fact that Kershaw has struck out batters at a clip 2.88 standard deviations above the qualifier average, and has walked batters at a clip 1.61 standard deviations below the qualifier average, seems somewhat unusual.

Kershaw needs 8.2 innings to ensure that he qualifies; he has crossed that threshold in five of his 21 starts so far, so I can probably assume he'll reach it by the end of the season. In that span, however, he'll probably pitch worse, because of that pesky regression to the mean. To account for that, let's lower our parameters to 2 standard deviations for strikeouts, and 1.25 for walks. Aside from Kershaw, how many other pitchers have put up these numbers in a season, since 1920? Only eleven:

Kershaw's 2014 stacks up with some of the best seasons of some of the best pitchers ever. This shouldn't come as a surprise, of course, but many still don't recognize the breadth of his preeminence. Perhaps they would acknowledge it if they understood how it has happened.

3. His slider has driven much of his success.

Whenever I see a pitcher's strikeout and walk numbers fluctuate, I like to utilize Mike Podhorzer's expected strikeout and expected walk formulas to determine if I should take them seriously. In Kershaw's case, the latter equation fully supports his "breakout."

Although the former equation feels that he's been a bit lucky, it still shows a significant step forward: 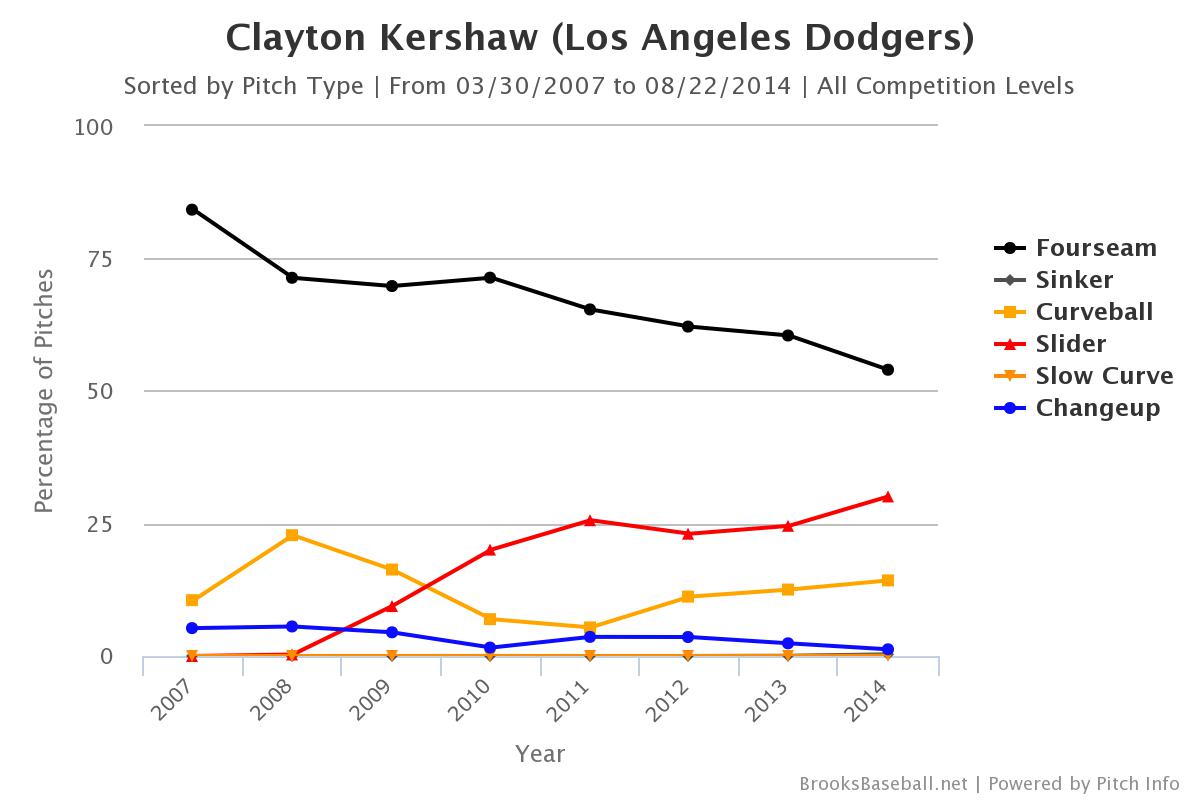 At 30.1%, his slider rate has never been higher; that has come, primarily, at the cost of his four-seam fastball. A peek at the velocities of these pitches makes it clear why he's made that change: 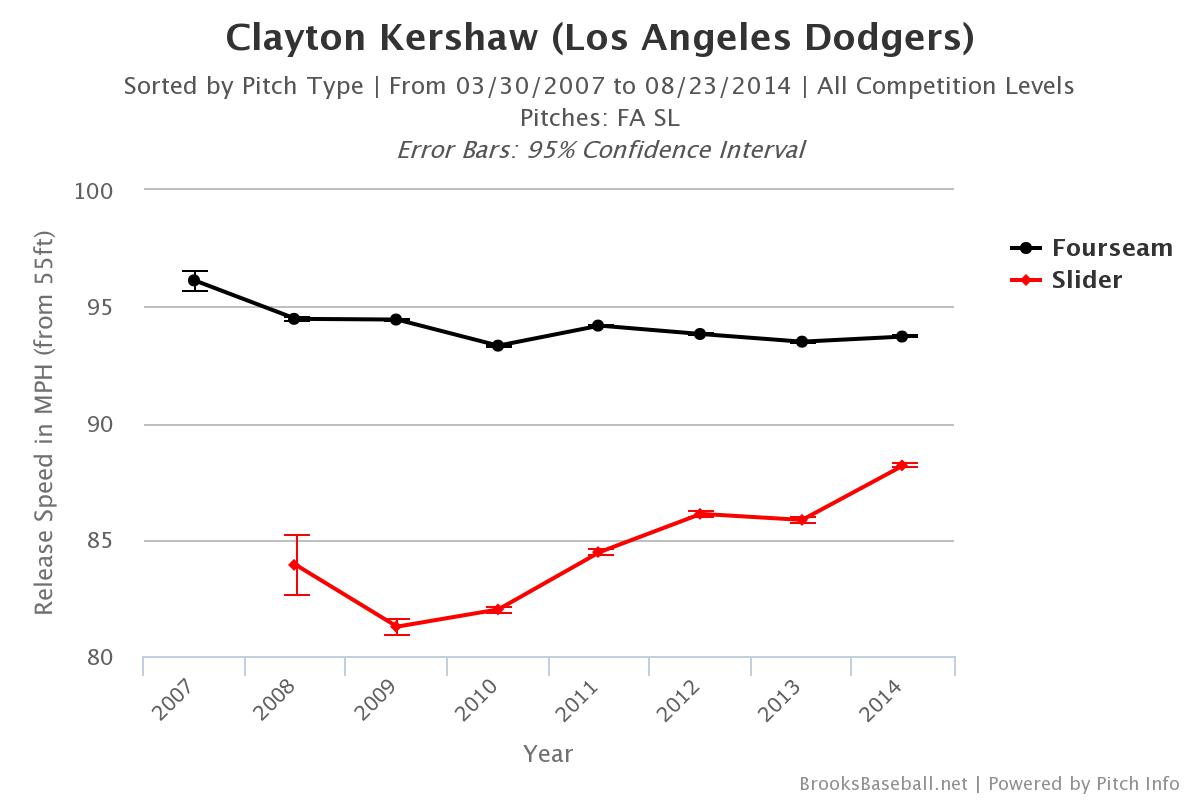 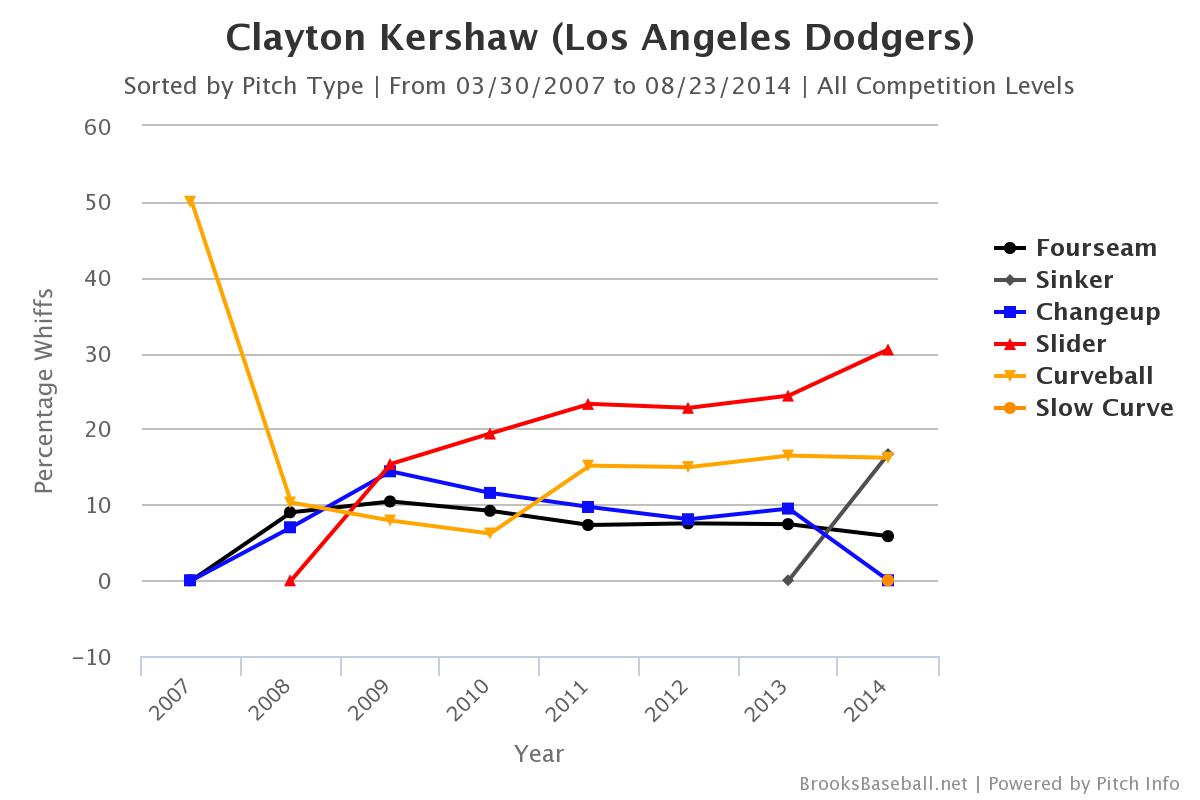 So this explains the strikeouts. As for the walks: He has pounded the zone a bit more so far (52.2% Zone%, compared to 50.9% in the three years prior), but his greater quantity of strikes is largely due to more swings overall. His Swing% now sits at 52.8%, tops in the National League, and a large improvement from his 47.7% figure from 2011 to 2013. Moreover, he has goaded hitters into swinging at pitches both inside (67.3% Z-Swing%) and outside (36.9% O-Swing%) the strike zone.

But why would batters offer at a pitch from Kershaw if they know they have a meager 72.9% chance of making contact? Well, let's examine the pitches at which they swing the most: 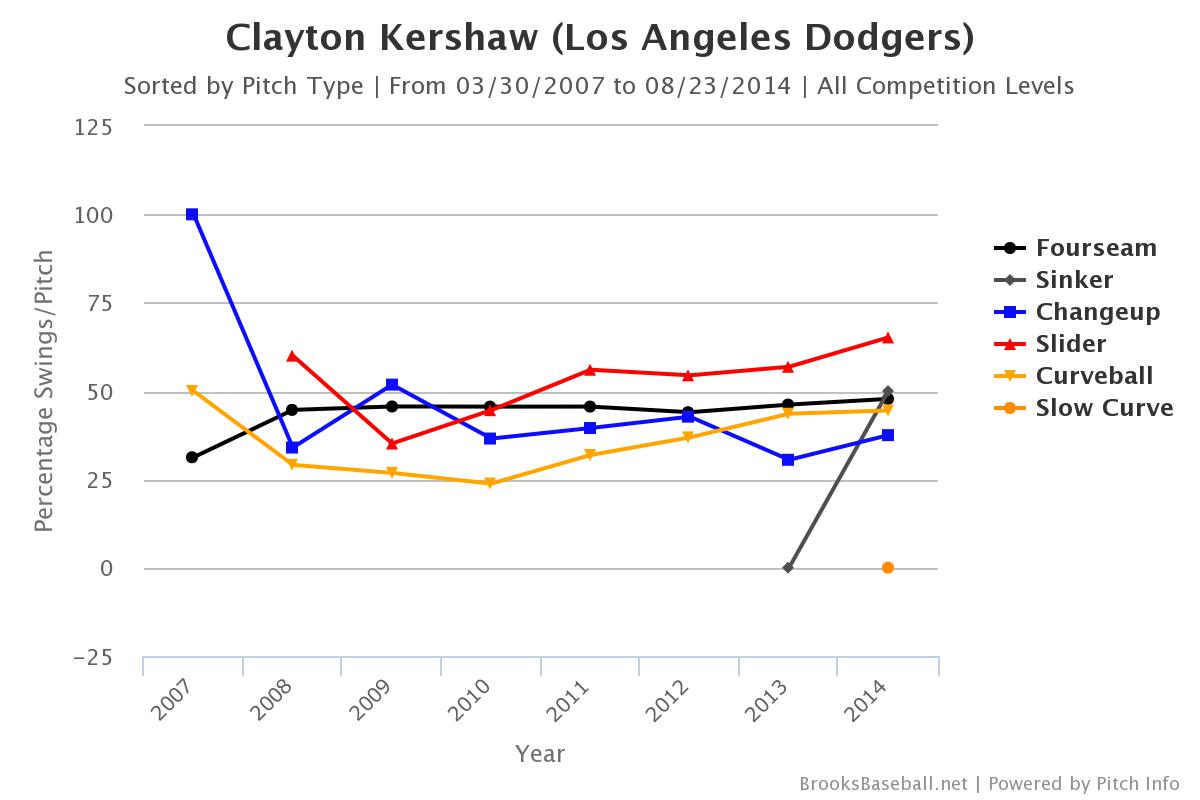 Again, his slider accounts for most of the change here. But why does it deceive hitters so? Its vertical movement might have something to do with that: 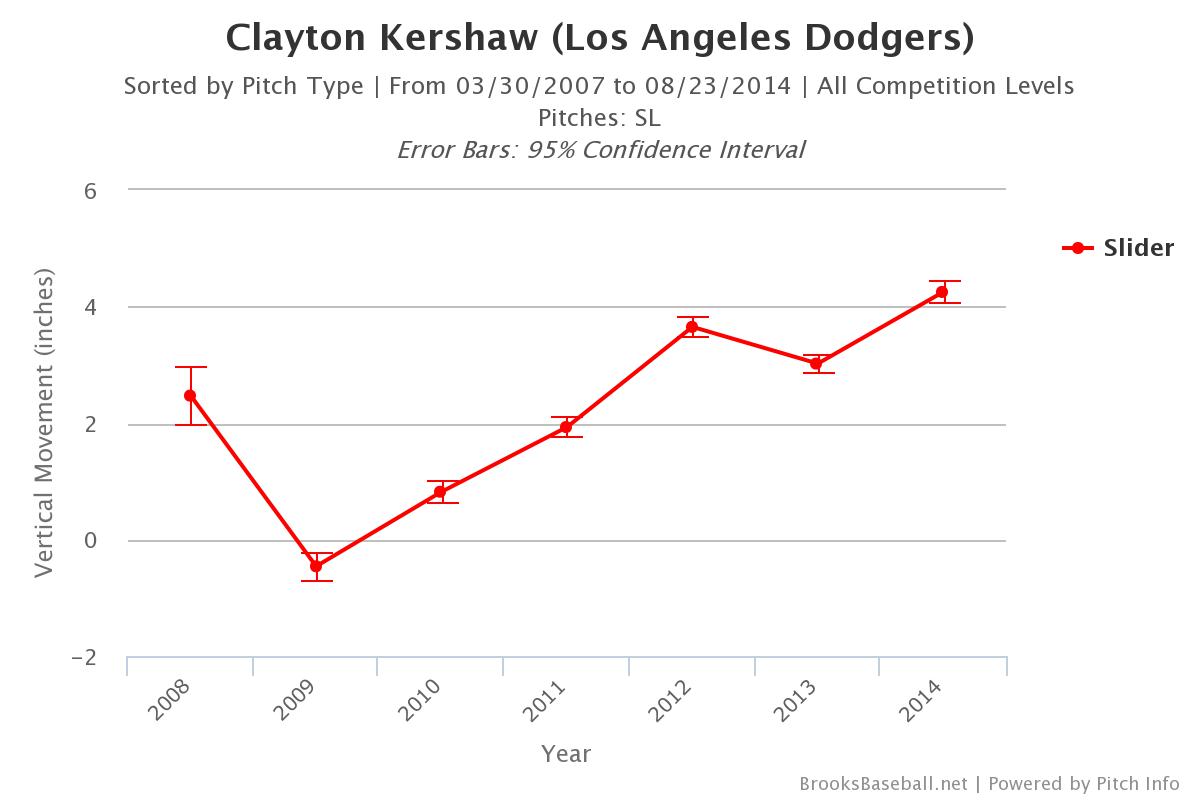 In case you were wondering, that 4.25-inch break bests all other pitchers (as do so many of Kershaw's stats). His slider's deadly combination of velocity and movement has made it a force to be reckoned with. As you might have guessed, FanGraphs's linear weights have it as the best in the majors (among pitchers who throw it often).

But, lest we forget, Kershaw has also collected more grounders this year. No one pitch has done it, either — his slider and four-seamer have seen notable increases. Instead, this seems to have come about as the result of a move downward on his part. Note the pattern in his zone maps: 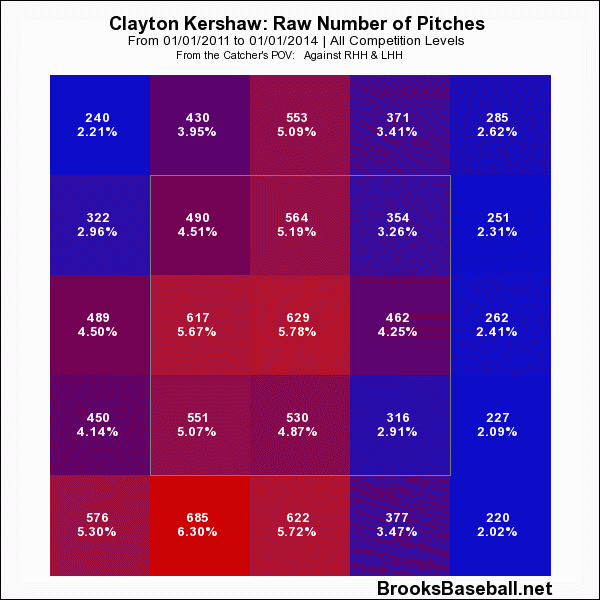 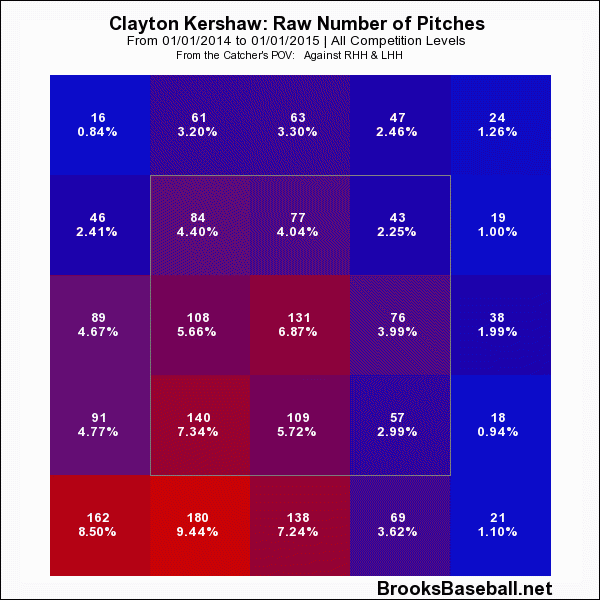 Lower pitches have higher ground ball rates — it's why sinkerballers get so many of them — and Kershaw doesn't break from this rule. Hence, his repertoire as a whole deserve the credit for his recent aversion to the air. Nevertheless, it's clear that his slider has created most of his magisterial 2014.

In summation: This man has reached a new echelon of performance — for himself, and for anyone; he has the best slider in the game, and possibly one of the best pitches, period; and he hit Jimmy Kimmel in the face. What's not to love?

All data courtesy of FanGraphs, Baseball-Reference, and Brooks Baseball, as of Monday, August 25th, 2014.