Edwin Jackson: A Cub lost in the woods

Share All sharing options for: Edwin Jackson: A Cub lost in the woods

When the Cubs signed Edwin Jackson in 2013, the hope was he would add stability, depth, and a reliable presence every fifth day. Unfortunately for the Cubs, this has not been the case, as Jackson has been an astonishingly bad -3.2 rWAR to date. In fact, if not for the $22 million owed to him in 2015 and 2016, there's a reasonable chance he would have been designated for assignment by now. So the question remains: Is there any hope for Edwin Jackson going forward or would the Cubs be better off cutting their bait and calling it a day?

To investigate, let's first look at why there was belief in Jackson to begin with. Prior to signing with the Cubs, Jackson had just come off a four year stretch (2009-12) worth 12.9 fWAR, putting him right on par with Mark Buehrle during the same period. In the offseason prior, Buehrle received fifty-eight million dollars over four years from the Marlins. Using Buehrle's contract as a base, the Cubs signed Jackson to a four year, fifty-two million dollar deal.  Given Jackson's similar record in recent performance, newfound success, and youth over Buehrle, it looked like this could end up being a steal for the Cubs.

Scott Lindholm •Beyond the Box Score

Alas, this has not been the case; in his first season with the Cubs, Jackson posted a 4.98 ERA and a league leading 18 losses. Despite this, his 3.79 FIP and 3.86 xFIP indicated there might be reason to still believe in Edwin. Yet, here we are in 2014 and Edwin Jackson's ship has not turned course; if anything it's continued its path towards atrocity.

The main cause behind Jackson's failure seems to be his inability to limit hard hits and runners from scoring. Since joining the Cubs, Jackson's left on base percentage has been a horrid 63 percent, keep in mind league average is usually between 70 to 72 percent. At first glance, you might be able to dismiss this as bad luck; after all, he also has a .335 BABIP during the same period. Yet, this doesn't seem to be the case, specifically because how he's been giving up the hits. If we look at Jackson's line drive and ground balls per batted ball in play, we see a disturbing trend. 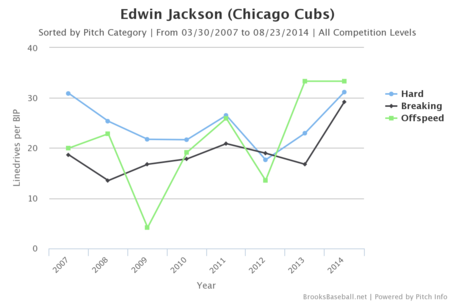 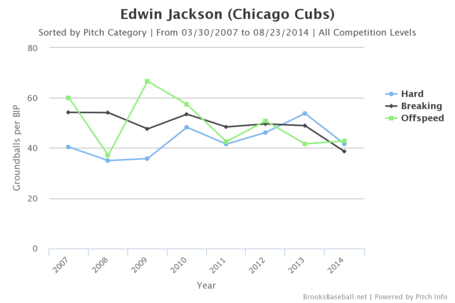 It's one thing to be BABIP'ed and blooped into a slow and painful death, but for Jackson, it's been much worse; he's getting smashed, mashed, and bashed to death. At least in 2013, Edwin was able to limit some of the damage by keeping the ball on the ground; now, he's not even able to do that.

As if this wasn't enough cause to worry about, there is one more area that is possibly the prime and more prominent area of concern regarding his troubles, this being his arm angle and release point. Below to the left is a picture of Jackson with the Nationals in 2012 and on the right this year with the Cubs. (Please excuse my Photoshop and camera angles, these were the best I could find). 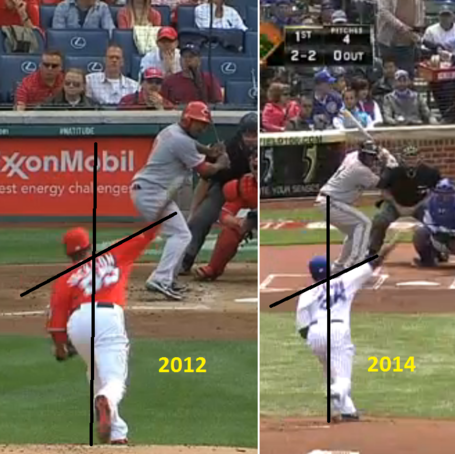 This might not look like much, but there is a noticeable difference. On the left, Jackson is taller and behind the ball, on the right he is flatter and out in front of the ball. Its one thing to notice this via the eye test, but Brooks also confirms this. 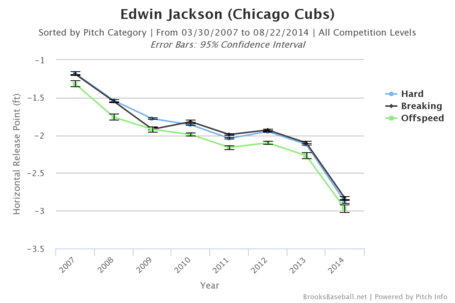 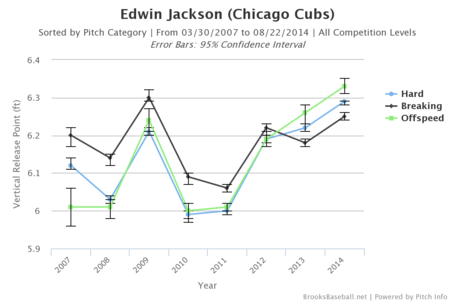 Finally, if we look at them plotted vs each other over the past three years, the regression is even more obvious: 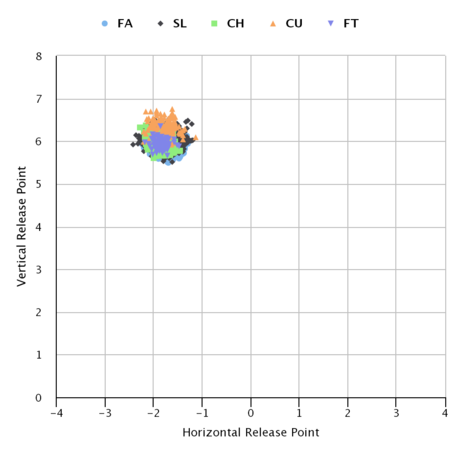 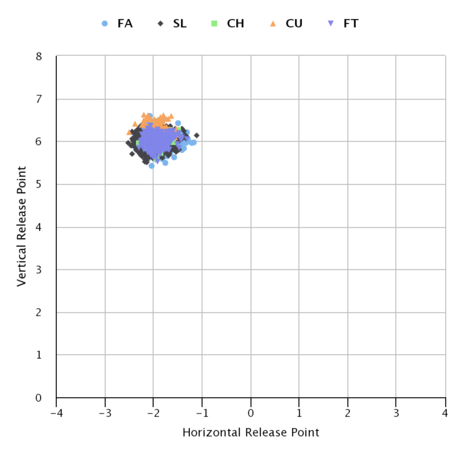 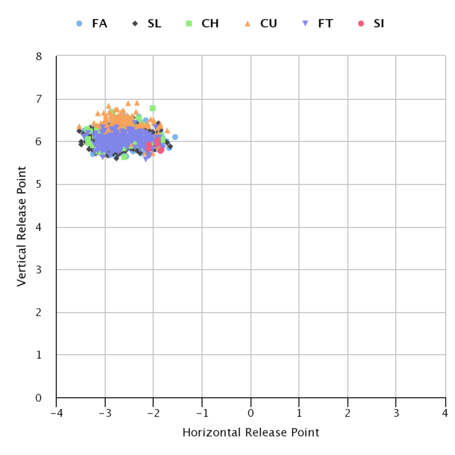 It looks as though Jackson has lost his release point, which would explain the uptick in walks, flatter pitches, and harder hit balls. I'm not sure how easily this can be fixed, but given Chris Bosio's success at turning pitchers around it, wouldn't be unprecedented. However, given how lost Jackson seems to be, its easier said than done. Until then, Cubs fans will have to hope Bosio can work some magic and salvage whatever they can of the remaining twenty-two million dollars owed to Jackson. If not, the Cubs will be out from under Jackson's contract by the time they're ready to compete, and he'll be a long lost memory during a forgettable era in Cubs lore.

All statistics courtesy of FanGraphs, Baseball Reference and Brooks Baseball.