The effect of a good bullpen in one-run games

Elite relief pitchers like the pictured Wade Davis do little to affect a teams' fortunes in one-run games.

Share All sharing options for: The effect of a good bullpen in one-run games

While listening to the Jonah Keri podcast a few days ago (a very insightful podcast that I highly recommend), Jonah’s guest, Grantland writer and Royals fan Rany Jazayerli, attributed much of the Royals’ recent success in one run games to their dominant bullpen. Jazayerli reasoned that elite relievers like Greg Holland, Wade Davis, and Kelvin Herrera shutting down opposing offenses in the late innings helped the Royals win seven of their last eight one run games and implied that if these pitchers continue to perform at a high level, this model of success in one run games could be sustainable. This theory made sense on the surface, as preventing opponents from scoring in the late innings should certainly help teams win the close ones, but I wanted to see if the data agreed.

In a research collaboration, Jeffrey Long and Bryan Cole examine the extent to which velocity matters for relievers.

To find out if some of that variance could be explained by a good bullpen, I examined many different WAR combinations of relief pitchers. First, I examined the total WAR of each club’s pen and looked for a correlation to success in one run games. The correlation was insignificant, as the coefficient of determination was a mere .026. This was a bit surprising, but I reasoned that perhaps it was just the elite arms that had an impact on one-run games. Teams tend to use their best relief pitchers late in close games, so it would make sense that these players would have a much more significant impact than the front of the pen guys (e.g. Matt Albers and Ryan Webb) on the team’s record in such games.

To account for this, I examined the combined WAR totals of both the best two and best three relievers on each team. The results were not any better than the previous results, with both combinations featuring extremely low and insignificant coefficients of determination. The graph below shows a scatter plot of the data. 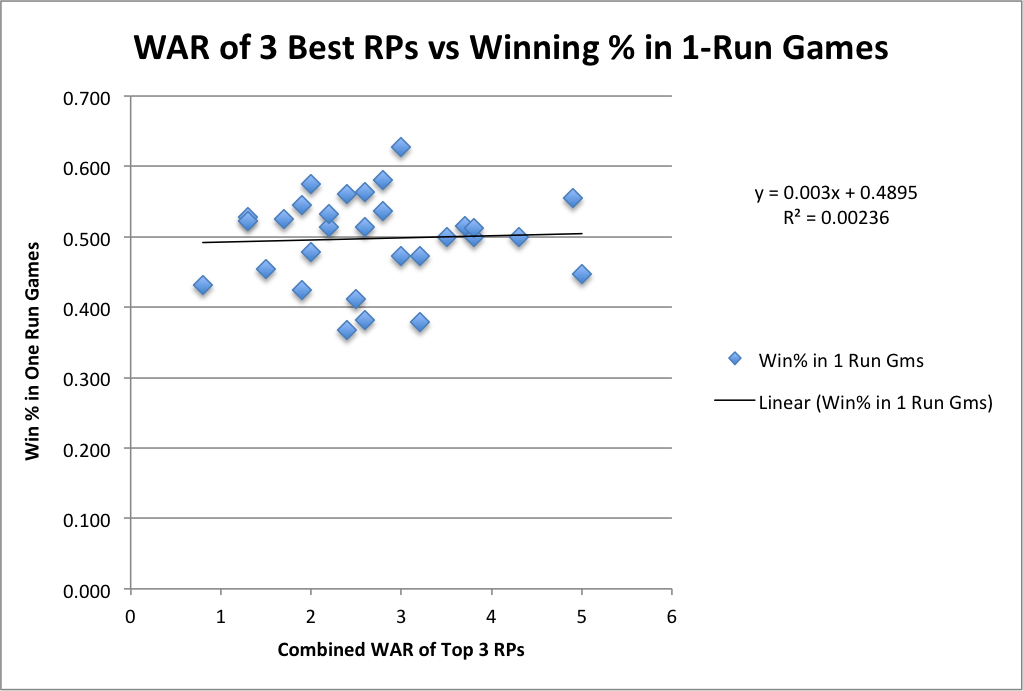 The correlation between the two variables is so low that the coefficient of determination (R-squared) is almost zero and it is difficult to differentiate the line of best fit from the gridline. The slope of this line is also extremely low, which again shows that having an elite duo or trio of relief pitchers does not affect a team’s win-loss record in one-run games.

Perhaps the biggest differences come from the Miami Marlins and Seattle Mariners. Miami, featuring a top three of Steve Cishek, Bryan Morris, and Mike Dunn that has combined for exactly three WAR, has a winning percentage of .627 in one run games. Contrarily, the Mariners’ trio of Fernando Rodney, Danny Farquhar, and Brandon Maurer has been worth 3.2 WAR this season, but the Mariners own a paltry .378 winning percentage in one run games. Additionally, the Mariners have the second highest total bullpen WAR in Major League Baseball, so the theory that pitchers other than Rodney, Farquhar and Maurer blow the games does not hold water.

Many have suggested that winning one-run games is not a sustainable skill but rather the result of random chance. This brief study supports that hypothesis by showing that even a dominant bullpen cannot help teams gain an edge in such contests. The Royals may have won seven of their last eight one run games and the bullpen may have pitched well in those games, but strength of bullpen is not a predictor of or way to ensure sustained success in such contests. One-run games are essentially a coin flip, and sometimes, due to basic laws of probability, a coin will land on the same side seven out of eight times. We should not be shocked by this and should avoid crediting someone or something for the success (or blaming for the failure, in the case of the teams playing the Royals), as either luck or something other than quality of relief pitchers is the driving force in the results of such games.

Dan Weigel, who no longer agrees with Bob Lemon that the two most important things in life are good friends and a strong bullpen, is a contributing writer at Beyond the Box Score and Minor League Ball. His tweets are found at @DanWiggles38.