The Blue Jays' Drew Hutchison threw seven innings and gave up seven runs in a loss to the White Sox last Sunday. Pitchers just don't have games like that any more.

Entering last Sunday's game against the White Sox, the Blue Jays were 64-61 and four games back in the AL wild card standings. It had been a rough week for their pitchers:

Two extra-inning games earlier in the week, coupled with consecutive games of using five or more pitchers, put pressure on Drew Hutchison to give the bullpen a break. It didn't start well as he allowed six runs in the first, including Conor Gillaspie's first career grand slam, and the question in the White Sox broadcast booth was whether he'd make it out of the first.

He did, eventually going seven innings and giving up seven runs for the loss, one he richly deserved. It seemed unusual to me at the time, so I checked -- he was the second pitcher to have such a game this year, the first being Tigers' Max Scherzer on May 21st in an extra-inning loss to the Indians. The chart below shows the number of games in which starters gave up seven or more runs and shows the innings pitched: 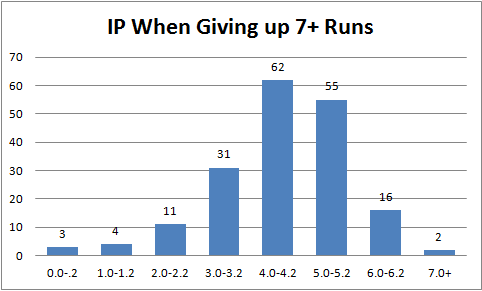 These games are rarities -- this chart shows the number of games in which the starting pitcher went 7+ innings and gave up 7+ runs since 1914: 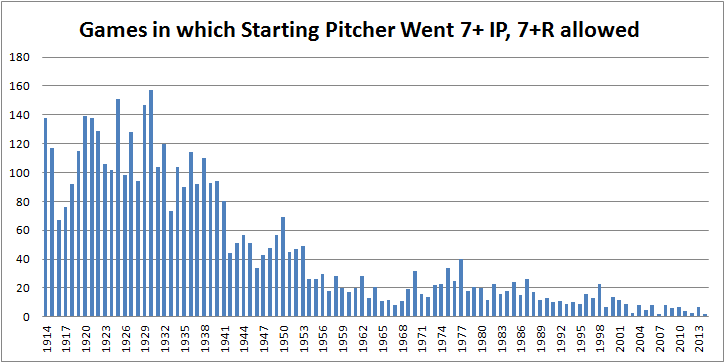 Not only has this type of game gone the way of the dinosaur, it appears it's been that way for quite some time. Back in the days when men were men, pitchers had a greater tendency of finishing what they started, but even putting it in relative terms there were never many games like this.

This is yet another nail in the coffin in which the pitching win firmly rests for the simple reason that starting pitchers have less leeway to finish what they start. As pitching staffs grew from nine in the 1940s to the 12-13 that teams routinely carry today, it was almost inevitable, but I'm not sure it needs to stay that way.

What alternatives did the Blue Jays have last Sunday? They could have stuck with Hutchison, arguably one of their five best pitchers, or jump down to at least number seven (I assume closer Casey Janssen is the sixth-best) or perhaps even lower. I strongly suspect this was going through Brad Ausmus' head as well in that May game I alluded to earlier, and my question, especially given the state of the Tigers' bullpen, is very simple -- who would give the Tigers the best chance to win in a tight game, Max Scherzer or the Tigers' porous bullpen?

In no objective manner can Drew Hutchison's game be considered a success -- he was ineffective against an inferior team when his team needs every victory it can get. But he did accomplish the very thing John Gibbons deemed most important by giving the bullpen a rest and keeping the damage to a minimum as the White Sox managed to score only one more run off him after the first. There's a good chance keeping him in the game was the best pitching opportunity Gibbons had at the time, even though it very much goes against the baseball book. I'm not advocating allowing pitchers to try to pitch through adversity in every situation, but it can work and shouldn't be rejected flatly out of hand. Besides, Hutchison was pitching against the White Sox -- anything could have happened.

All data from Baseball-Reference. Any mistakes in amalgamating the data are the author's.