James Russell appears to have reverse platoon splits this season. Here we look for a change in his approach that may be driving this and consider how much weight the Braves should put on it when managing their bullpen.

In the 8th inning of the Sunday Night Baseball game between Oakland and Atlanta, Braves manager Fredi Gonzalez made a pitching change that was somewhat perplexing. With right-handed hitters Josh Donaldson and Derek Norris due up and a slim 1-run lead, Fredi called upon left-handed reliever James Russell (acquired from the Cubs at the trade deadline). This seems like madness. Donaldson and Norris both hit left-handed pitching much better than right-handed pitching. Here are their career splits:

Those are huge splits, with significantly better performance against lefties. Now, neither player has accumulated enough plate appearances against left-handed pitching for the size of their splits to be reliable. As such they should be regressed toward a league average percentage split (e.g., 6.1% from The Book). After doing so, we see that while the magnitude of the splits is smaller, it is still evident that both hitters perform much better against left-handed pitching:

Given this information, it appeared as though this pitching change had all the makings of another opportunity to mock Fredi's bullpen management. Then, seemingly in an effort to provide support for Fredi's decision, ESPN showed this: 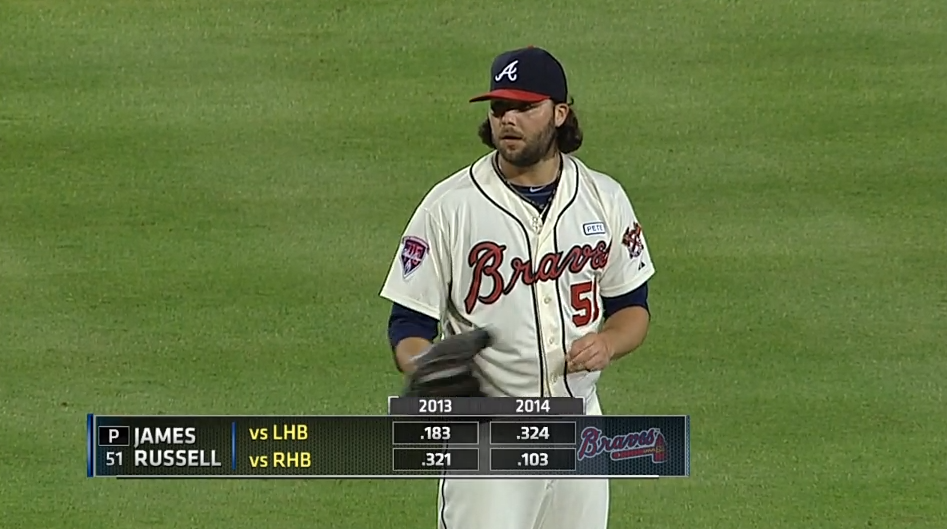 It is important to note that the numbers in that graphic are batting averages against, not wOBA against. Below I have presented the numbers to wOBA against because (1) it is a much better way to evaluate performance, and (2) it gets us closer to an apples-to-apples comparison with the numbers presented for the Athletics hitters' splits:

The trend remains clear. There was no reason to expect it would change when converting things from batting average to wOBA. But are we to assume that James Russell is doing something dramatically different from last season to turn himself into a righty killer?

Jeff Wiser •Beyond the Box Score

The decision-making on Sunday night would seem to indicate that the Braves think this is the case. This is worth investigating. Perhaps there is evidence to support this notion in Russell's pitch repertoire, velocity or location across seasons. 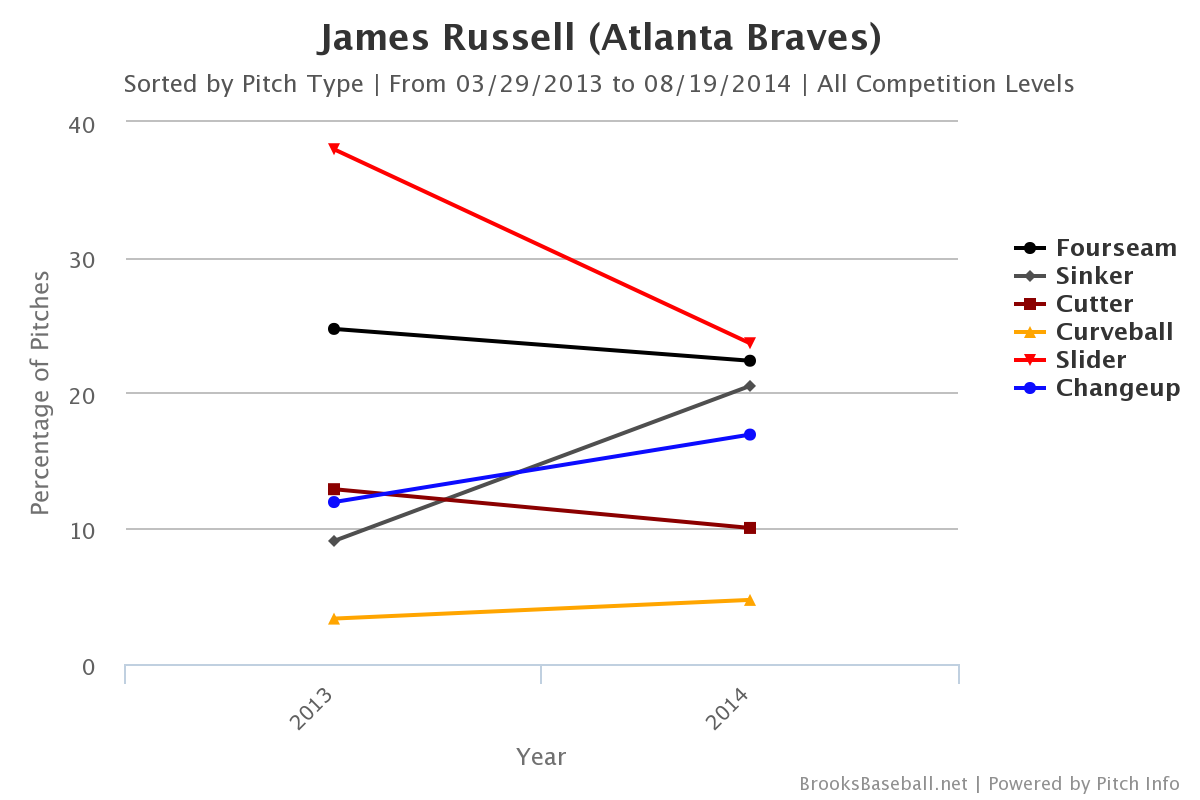 It looks like the main difference is that he is throwing his slider less and his sinker more. These changes are really evident when looking at his pitch selection against right-handed batters (not directly shown in the image). However, there is good evidence that sinkers and sliders are pitches with pronounced platoon splits (further reading here and here). It is not the case that he has traded a pitch with a strong split for one that is neutral or even reversed. So given Russell's pitch selection we would still expect to see opposite handed batters hitting well against him.

Perhaps he has adjusted the velocity at which he throws his pitches. 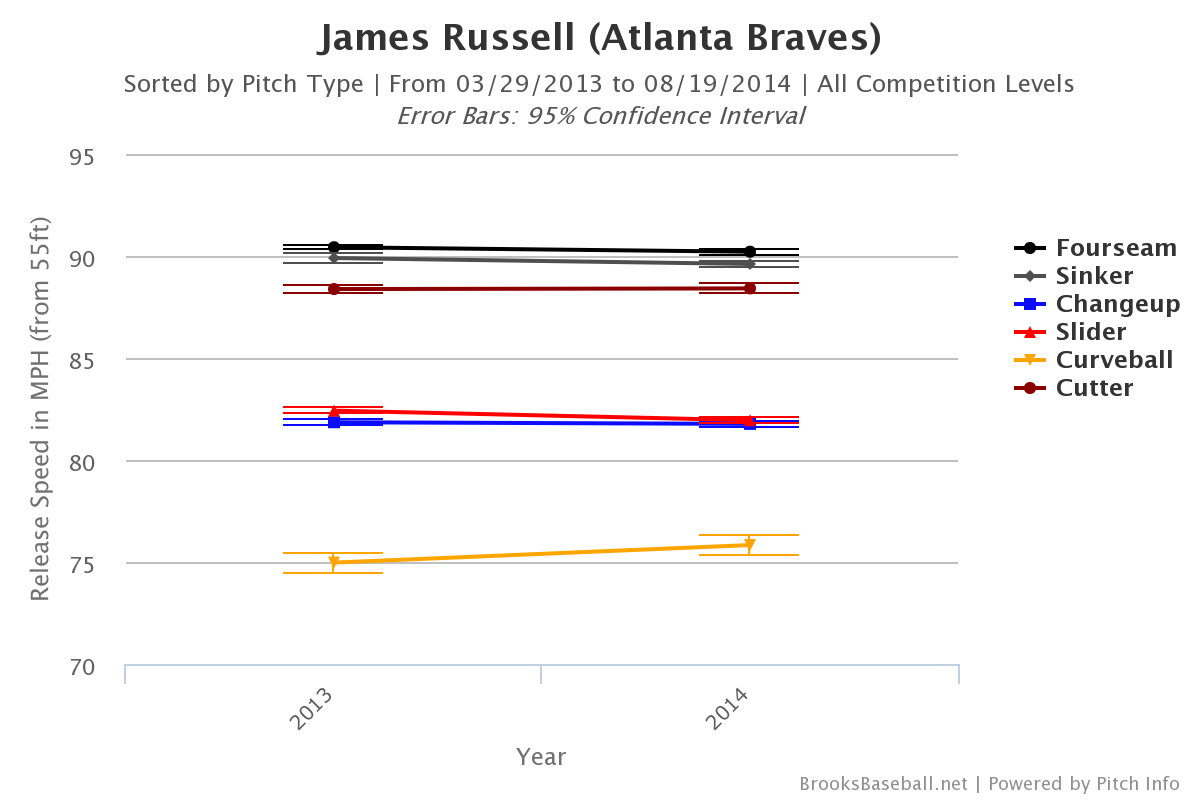 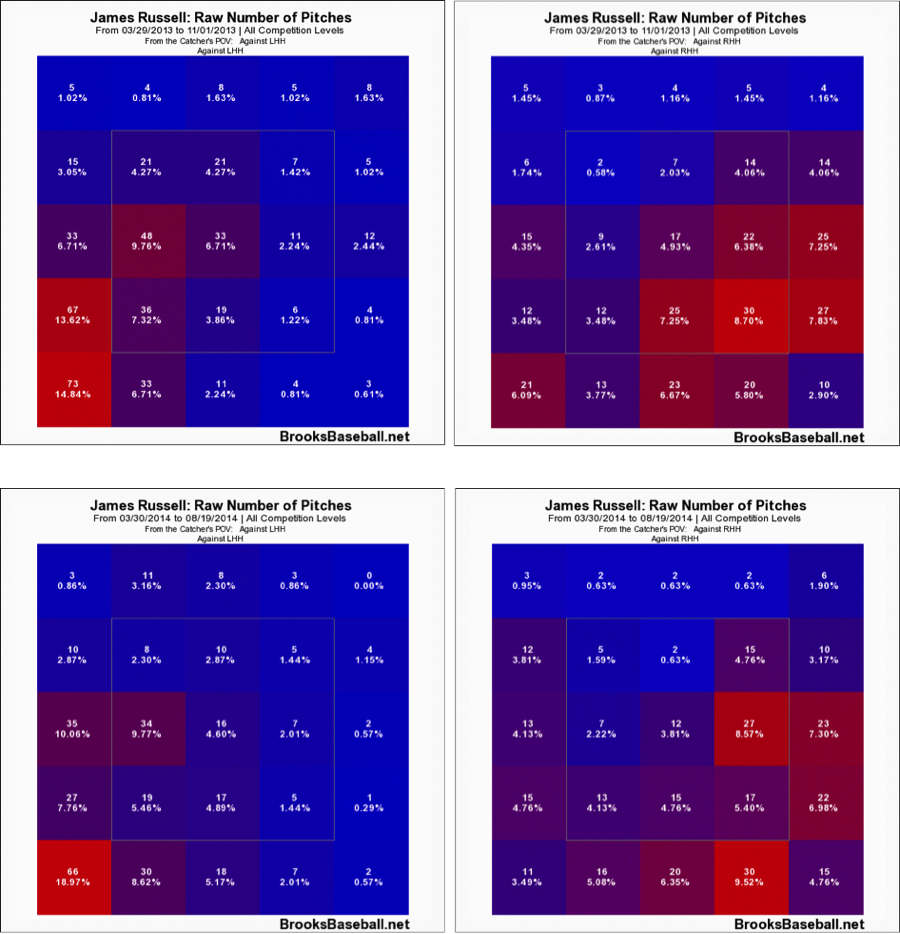 That looks like a consistent approach to me: down and away to both lefties and righties. There may be some subtle differences with the location to which he throws certain pitch types, but that would involve a real fishing expedition to find evidence to explain this odd reverse split.

All told there is not really evidence of a change in James Russell's approach to opposing batters. But he is a righty killer now, right? Well probably not. This is really a lesson in sample size and variation. The wOBA against numbers given in the table above involve small samples of batters faced (122 and 95 in 2013; 84 and 89 in 2014). So they are more likely a product of random variation than some change in talent. Moreover, if we push that table to include a couple more seasons we see that Russell has shown a flip in splits before, and that his dominance over right-handed hitters in 2014 is quite atypical:

Again these individual seasons involve small samples of batters faced. Looking at Russell's career numbers (a much larger sample of batters faced) provides a clearer picture of his performance. Doing so reveals a pattern we would expect from a left-handed reliever:

Now, it is entirely possible, quite likely even, that Fredi Gonzalez and the Braves organization know something about James Russell that I have missed here. But while this pitching change worked on Sunday night (Russell allowed a single to Donaldson and then Norris grounded out to end the inning), I would not expect it to continue working for the rest of the season. The Braves are fighting for a playoff spot and need to be very careful to use their roster effectively. Relying on small samples of in-season data will not help this cause.

All statistics courtesy of FanGraphs and BrooksBaseball.