Rookie outfielder David Peralta and veteran right-hander Trevor Cahill are giving the Diamondbacks a glimmer of hope despite a season that everyone would just rather forget.

Share All sharing options for: Signs of life in the desert

You don't have to have been watching closely to know that the season for the Arizona Diamondbacks has gone anything but as planned. In fact, it's been pretty terrible from the start. Swept by the Dodgers in Australia, an 8-22 record by the end of April, Tommy John for Patrick Corbin, significant injuries to Paul Goldschmidt and A.J. Pollock, the list goes on. In short, a whole lot's gone wrong and almost nothing's gone right. There's a Kevin Towers joke in here somewhere, but we'll save it for another day.

When I say that almost nothing's gone right, I mean almost nothing. There have been some recent signs of life from two Diamondbacks that were unlikely topics for this post just a couple of months ago. Rookie outfielder David Peralta has arguably become the team's best hitter and, oddly enough, Trevor Cahill has possibly become the team's best starter over the last six weeks. With virtually no star power to speak of, these two have collectively stolen the show in Arizona.

First to Peralta, of whom you've likely heard of by now. As the story goes, he was signed out of Venezuela by the Cardinals and began his pro career as a left-handed pitcher at the age of 18 back in 2006. If you don't recall, that was a pretty long time ago in baseball terms. He tore up his shoulder in 2007 and would never pitch again. That's where a lot of big league futures end, but not Peralta's. He stuck with the game he loves and reinvented himself in independent ball before being scooped up by Arizona as a lefty swinging outfielder in 2013. With a six-year hiatus separating his stints in the minors, this story was unlikely enough before he was promoted to the majors in June in 2014.

Perhaps even more unlikely, if that's even possible, is the success he's found. His slash line over his first 61 games is .293/.325/.461, good for a wRC+ of 116. He's fine defensively, seeing at least 15 games at each outfield spot, although playing primarily in left where he's probably best-suited. A slightly inflated BABIP (.337) is helping his cause, but he's also hit the ball with authority pretty regularly, at least as far as Diamondbacks hitters go. His K% is manageable at 16.4% although he's not much for patience, walking just 4.1% of the time. His ISO of .168 isn't terrible, and although he has just five homers, 23 of his 45 major league hits have gone for extra bases, including six triples. He's stolen four bases, including this steal of home that's certainly worth watching.

While Peralta's been the least likely of revelations, accumulating 1 WAR as a rookie who was never supposed to make it half this far, there's still plenty of refining to do. He chases pitches outside the zone at a high rate (O-Swing 36.3%), but his plate coverage makes this feasible (O-Contact 67.2%). That's like a band-aid, however, and isn't going to be the kind of approach that's sustainable long-term in all likelihood. He's only getting 43.3% of pitches in the zone because pitchers know he'll expand, and until he learns to better control the zone, he'll continue to see a relatively low number of favorable pitches.

But consider this: David Peralta has gone from international pitching prospect, to permanently unable to pitch, to independent baseball player, back to the minors, and on to the majors. If anyone's going to work hard enough to refine his approach and continue to improve, it might just be David Peralta. In fact, working as hard as possible to stay in the majors might just be the one thing we can count on when it comes to this guy, although whether or not he truly lasts may be a different story as major league baseball is incredibly unforgiving.

Speaking of forgiveness, I sort of hope Trevor Cahill can forgive me for all of the bad things I've said about the guy in the last year plus. After being part of the Jarrod Parker trade that just doesn't look all that good for anybody, Cahill was kind of good for Arizona, and then he wasn't.

It got so bad that the six-year vet and former Rookie of the Year candidate got demoted to the bullpen after only four major league starts this spring. He was better out of the ‘pen, but with the team owing him nearly $20 million over the final two years of his contract, that wasn't going to be a long-term solution. So he was sent to the minors in early June to work on mechanics and stretch back out. Some of the results down there weren't exactly encouraging, as he didn't plow through inexperienced lineups as one might expect. When he resurfaced with the Diamondbacks, I was skeptical to say the least.

Cahill's problems started with a failure to throw strikes. Before he was sent down, he was generating strikes with just 57% of his pitches. It resulted in a lot of wasted effort and getting behind in the count, then getting punished. Since being called back up, he's hanging around 60% strikes. While it may not sound like a lot, but given the way pitches are sequenced, this is quite an improvement. His 5.44 BB/9 were really his demise early in the season, but the extra strikes have helped and he's now walking just 2.02 batters per nine since being recalled. His K/9 have also dropped sharply, and although some of that is due to him moving out of the bullpen, he may also be changing his approach to generate more contact by being in and around the zone more consistently. Keep in mind, however, that "more consistently" is a relative term as his heat maps pre and post-demotion highlight. 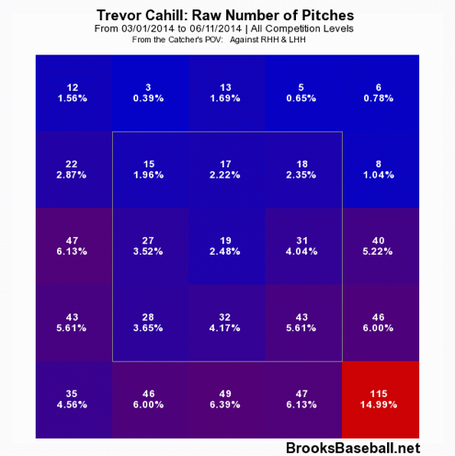 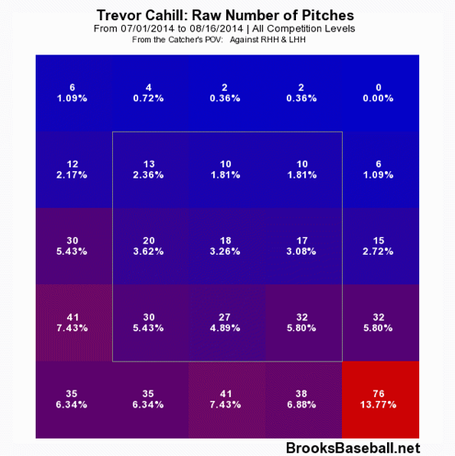 If you look hard enough, you can see some encouraging signs in there, but Cahill is hardly a strike-throwing machine. The results, however, have significantly improved. Consider his line from his six starts since rejoining the Diamondbacks.

Cahill relies primarily on a sinker that moves a ton. At times, it almost appears to move too much. It's a tough pitch to throw for strikes, and he's had some release point issues at times, too. But Arizona is on the hook for the rest of Cahill's salary (about $14.5 million) through 2015, and if these results bear any truth, he may just be worth hanging onto yet as his trade value just isn't high enough, given the money he's owed, to think they'll be able to move him in a favorable deal.

Despite a terrible season in the desert, the Diamondbacks may have found two pieces they can build upon. David Peralta projects as an average major league regular with a chance to become slightly better and Trevor Cahill has become functional once again. Some small sample size caveats apply, but there are some reasons to think David Peralta's success isn't all luck and Trevor Cahill's improved strike-throwing give one hope that he may be someone the Diamondbacks can continue to turn to as they look to rebuild their rotation. It's been a rough year in Arizona, but there may be some signs of hope just yet.

Jeff Wiser is a featured writer at Beyond the Box Score and co-author of Inside the 'Zona, an analytical look at the Arizona Diamondbacks. You can find his work on craft beer at BeerGraphs and follow him on Twitter @OutfieldGrass24.