Who has hit the longest home run at Citi Field during the HitTracker era?

Giancarlo Stanton came to the plate to lead off the seventh inning on May 16th, 2011. In the process, he slammed a moonshot past the centerfield fences and onto the black tarp in Citi Field, notching a run to tie the score at one apiece. Little did Stanton know, that was the longest home run in Citi Field's history, a record that still stands to this day.

When you reach the 10:20 PM (EST) mark in the Amazin' Avenue gamethread, you'll know what had happened. A smattering of expletives followed by groans of disappointment would alert you to some major event in the Marlins/Mets game continuum. A few comments later, the first real explanation appears: Giancarlo Stanton (then Mike Stanton).

As a prospect, Stanton possessed incredible power. He could easily slam home runs, racking up 67 in just two full minor league seasons. In 2010, he hit 43 home runs between AA Jacksonville and the MLB. In his first real start with the club in 2011, he began the season by batting 6th and finished the season batting 3rd, all while creating runs at a well above average 141 wRC+ clip. He clubbed 34 home runs and maintained a .537 SLG and .275 ISO. 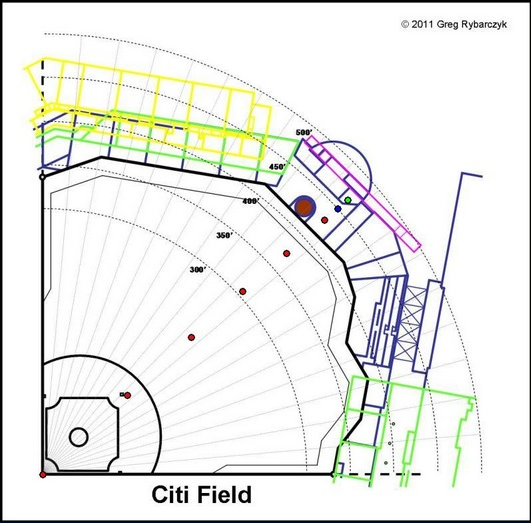 Stanton entered the batter's box and awaited the first pitch. A fastball in the top of the zone was fouled off, a slider much too far left resulted in a ball, and another fastball was hit foul. Clearly, Stanton was making contact, even with pitches way out of the strike zone. Pelfrey wound up again and delivered an 85.2 mph slider to the right-center of the strike zone, which proceeded to fly far past the outfield fences (Video here).

Even though this home run left such an impression in Citi Field history, it wasn't even Stanton's longest of the season. He hit two home runs farther in 2011, traveling 466 and 474 feet respectively. Both were hit at Coors Field. This particular home run traveled 465 feet, 48.4 feet or 11.6% further than his usual home run in 2011. Similarly, the ball left the bat at 112.8 mph, 5.4 mph faster than average. In a hectic game where the Marlins won off a Burke Badenhop (Florida) single in the 11th inning, Stanton's home run proved to be a stellar blast. He tied the game at one run in the seventh and sent the game into extra innings.

The massive home run can be linked to two primary causes. First, Pelfrey's slider ranked among the worst in the game. Secondly, Stanton has a knack for slugging sliders in the bottom portion of the strike zone.

When pitted against all other qualified pitchers in 2011, Mike Pelfrey's slider ranked as the second-worst, only slightly ahead of Ryan Vogelsong. His slider was worth 8.8 runs below average and 1.61 runs below average per 100 sliders. The reason for these horrendous results stem from the pitch's lack of movement. Against the average MLB slider in 2011, Pelfrey's moved 0.6 fewer feet horizontally. Additionally, 16.67% of Pelfrey's sliders thrown during the game were grooved.

The bottom-right diagram below represents Giancarlo Stanton's slugging percentage on sliders in 2011. As you can see, he excelled on powering pitches in the bottom half. The specific slider's location (Right-Middle) has a 1.000 SLG%. Normally, that's a great rate for batters; however, Stanton's excels even more in the bottom-left side of the zone, making it appear like his performance in the right side is just average. Stanton also produced well versus sliders overall in 2011, ranking 23rd among batters with 5.5 wSL runs. With both factors in play on the eventful pitch, Stanton had the experience and excellence necessary to send the ball deep into the stadium. 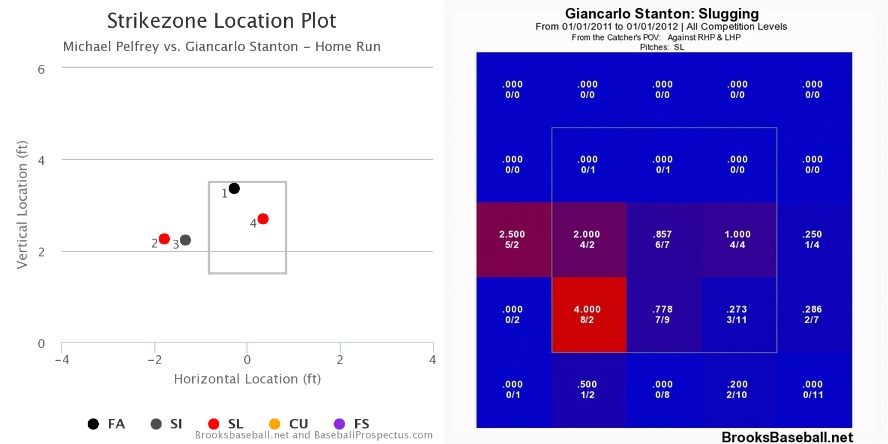 Giancarlo Stanton was lucky enough to face off against one of the worst sliders in baseball in a favorable zone, creating the perfect environment for a monstrous home run. Citi Field's longest blast was one to remember.