There are no gimmicks with Jake McGee. HItters know what's coming but McGee beats them anyway.

Share All sharing options for: Jake McGee, predictable and dominant

A starter during most of his Minor League career, McGee has been in the pen full time since his promotion in 2010. In that time, he has dabbled with a slider, a changeup, a cutter, and a curveball in addition to his fastball (using the Baseball Info Solutions pitch data at FanGraphs). The curveball is the only offspeed pitch remaining in his repertoire, as he has developed then scrapped the others over the past few years.

This is not to say that his curveball is presently a good pitch, perfected after years of refinement. Instead, it is just the opposite. McGee’s curve has been worth -5.89 runs per 100 pitches, an awful mark that is the fourth-worst in the league among qualified relievers. Wisely, McGee has all but shelved the pitch, throwing it only 36 times all season including just once so far in August and four times in July. There are no other pitches in his arsenal, meaning that every one of the other 293 pitches thrown by McGee in these two months was a fastball.

Returning to conventional wisdom, if McGee throws only fastballs, then hitters are surely expecting fastballs and are able to hit them, right? McGee’s pitch selection essentially removes the element of surprise from the batter-pitcher matchup, which makes the batters’ job much easier. When facing McGee, the batter must only figure out the location of the fastball, as opposed to identifying the pitch type and location against most pitchers. However, despite the predictable usage patterns, McGee is tied with Dellin Betances for the most fWAR among qualified relievers at 2.3.

The reason for his success is his elite fastball. The pitch has gained velocity every season since his debut in 2010, starting at an average of 94.59 and reaching as high as an average velocity of 97.65 this season. For a big lefty who hides the ball well, that velocity plays up, making it more difficult to hit.

As for movement, McGee has shown the ability to manipulate the pitch as he pleases. When throwing the pitch to his arm side (inside to a lefty, away from a righty), he generates some natural arm side run. Contrarily, when he throws to his glove side (away from a lefty and inside to a righty), McGee gets his fingers around the pitch, eliminating the natural run and adding boring action in towards the hands of a right-handed hitter.

His fastball is not straight and moves subtly in different directions, always away from the center of the plate. The difference in movement is not extreme, but it is enough to miss the sweet spot of the barrel, so even if batters are able to catch up to his heat they have a difficult time squaring it up.

His command of the pitch is also good, although he utilizes the pitch very differently against left and right-handed hitters. Against left-handers, the chart below shows how he stays almost entirely away from same-side hitters. 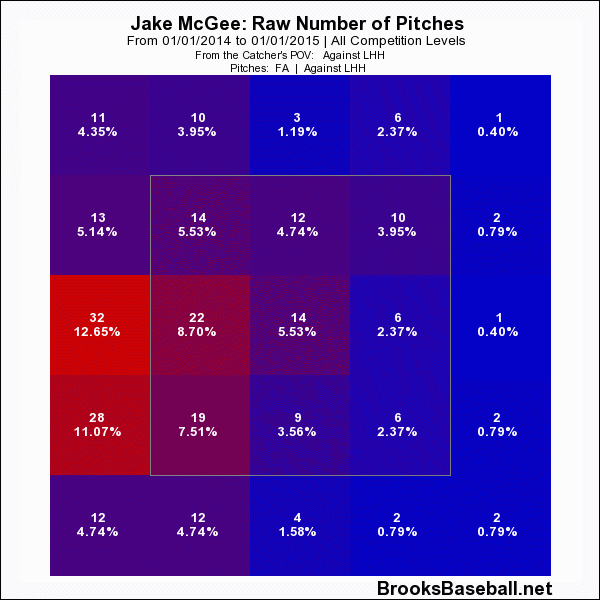 McGee has only thrown eight pitches off the plate inside against lefties this season, while pales in comparison to raw pitch counts for pitches away from left-handers. Interestingly and perhaps because of this predictability, left-handers have hit McGee much better than right-handers this season. Lefties are slashing .233/.274/.305 against him, which is poor but much better than the abysmal .153/.213/.169 mark from righty batters.

McGee’s trends against right-handers are must less drastic. He moves the ball around a bit more, working all parts of the zone, although his greatest success comes from one specific pitch: fastballs up and away. 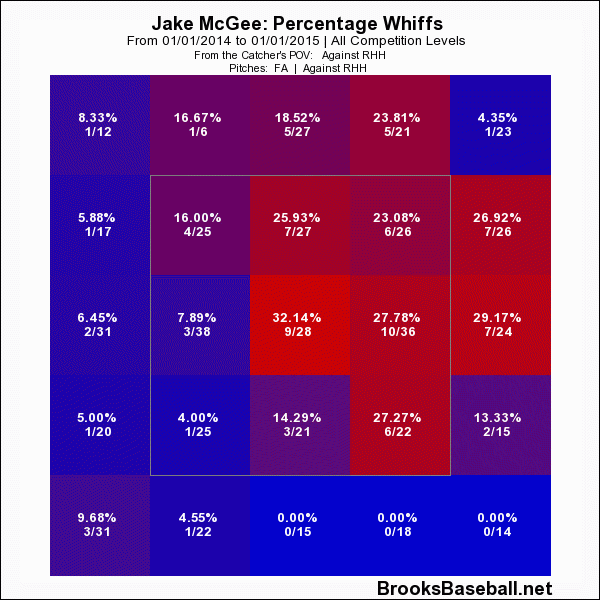 McGee generates very few whiffs on pitches down and/or inside to righties but generates a high rate of whiffs on pitches out and away from those hitters. I have no idea why this is the case, but this is a significant amount of data with a very clear trend so I don’t see it as a fluke.

Instead, I see this as an opportunity for McGee to gain a competitive advantage. It doesn’t matter why right-handed hitters consistently swing through his fastballs up and away as long as it continues to happen, so McGee ought to simply continue throwing fastballs up and away until it stops happening. He shouldn’t throw every pitch to this location, as fastballs inside help keep hitters honest and off of those located up and away, but when he needs to make a big pitch, up and away is his best option.

Jake McGee is the rare pitcher who can tell the hitter what is coming and still beat them Against lefties, it’s almost always fastballs away. Against righties, he will spread it around but ultimately win with fastballs up and away. Opposing hitters most likely have figured this out by now, but McGee continues to be dominant anyway. He is having a season for the ages, and his predictability makes it a lot more fun.

Dan Weigel is a contributing writer at Beyond the Box Score and Minor League Ball. You can follow him on Twitter at @DanWiggles38.