Gut check: Core muscle injuries and their effect on the Detroit Tigers

For both Justin Verlander and Miguel Cabrera, the 2014 season has been somewhat sub-par. Could their performance be explained by their core muscle injuries?

Share All sharing options for: Gut check: Core muscle injuries and their effect on the Detroit Tigers

The lower body muscles that comprise the 'core' are fundamental to the mechanics behind hitting and throwing. As such, injuries sustained to the core can be devastating, not only on performance, but also to the adherence to proper hitting and pitching mechanics in light of injury. For the Detroit Tigers, this rings particularly true, given the core injuries to their top pitching and hitting performers—Justin Verlander and Miguel Cabrera—and their somewhat shaky comeback from surgery for athletic pubalgia, otherwise known as a sports hernia.

From an anatomical perspective, the core is a complex swath of real estate, comprised of more muscles, ligaments, bones, and soft tissue elements than any other part of the body, with a number of systems that share portions of core anatomy to perform their duties, such as the genitourinary, gastrointestinal, and neurological systems. In order to simplify some of this complexity, the functional anatomy of the core is often broken down in terms of the joints residing in the area: the ball-and-socket joint of the hip and the 'pubic' joint, thought of the pubic bone and its multiple muscle and soft tissue attachments.

There are a number of primary and secondary muscle groups that define the core; however, specific to a sports hernia, the muscles typically involved are the rectus abdominis, with involvement of three adductor (groin) muscles—the adductor longus, adductor brevis, and pectineus—most often involved in sports hernia injuries, either independent of or in concert with one another. Other soft tissue structures have also been reported in the literature as causing sports hernia syndromes, adding further to the complexity of the anatomy and the injury. While somewhat of a misnomer since no hernia actually occurs, the sports hernia arises when these muscles over time become weakened from a tear or series of microscopic tears of the afflicted muscles where they attach to the pelvis and pubic bone. This being said, a variant of sports hernia often seen in pitchers and hockey goalies can often present itself as a true muscle herniation. These tears are classified as Grade 1 when they are small without avulsion, Grade 2 when partial avulsions are involved, and Grade 3 when a complete avulsion is experienced. Other core muscles unaffected can often overcompensate due to the injury, putting a player at further risk of harm, due to the imbalances of strength and coordination arising from the core.

Pitchers are particularly at risk for sports hernias, arising from the amount of core muscle involvement and firing in a number of pitching phases. During wind-up and up to the balanced position, the core is active in maintaining pelvic positioning and overall trunk stabilization, with the acceleration phase notable for a very quick and forceful weight shift, with the brunt of these forces taken on by the core as the upper extremities rotate to throw the pitch. This external rotation of the hips find the non-dominant side of the core abducting, while the dominant side adducts and rotates, with flexion of the abdominal muscles. Follow-through is hallmarked by a sudden deceleration of the above processes, with a considerable amount of tension produced by the trunk and core muscles in order to slow the upper extremity all while maintaining balance. Lack of coordination during these major shifts of force and weight—from dominant to non-dominant side and from lower to upper extremity—are typically the culprit behind sports hernias, with either poor conditioning or mechanics typically being at the root of the failings of coordination.

Mechanically, excessive lead foot strides can often cause sports hernias, as they put significant stress upon the adductors of both legs, as abduction of the femur from the acetabulum of the hip is often at its maximum. Injuries arising from periods of transition, such as from follow-through to fielding a bunt, can also be sustained. Maximal firing of the core from an upright position is often seen in follow-through and a sudden switch to sprinting or changing direction can often put the core at risk for tears.

For Verlander, his sports hernia was apparently something that had nagged at the hurler for some time, with surgery finally performed in the 2013 offseason. Hopes were high that this would resolve the issue and that 2014 would see Verlander injury free. However, recent outings have shown him to be somewhat human, with his suffering through some shoulder inflammation perhaps adding to the inconsistency in performance. While this typically is something that comes with the territory of being a workhorse starting pitcher—especially one in his early 30's who has logged close to 2000 innings pitched—there are concerns that the shoulder issues could be linked to Verlander's return from the sports hernia. With less invasive, laparoscopic procedures, a return to everyday activities can be reasonable expected six weeks after surgery for a sports hernia repair; Verlander's Opening Day start was roughly two months post-op, indicative of a very quick recovery and rehab process. Given Verlander's profession and his mechanics, which see him use a very pronounced leg kick at balance point followed by a fairly significant lead leg stride to acceleration, and the complexity of the anatomy and repair as well as an inconsistent timetable for the return of strength and coordination of the muscles involved, perhaps Verlander's struggles arise from too aggressive of a return from surgery.

With a more aggressive return, the ability for the core muscles to be properly stretched out, strengthened, and returned to the proper levels of coordination necessary for pitching (and for Verlander's particular mechanics) are potentially affected, with irregular stride lengths—specifically, the shortening of stride—arising from not-quite-fully-conditioned core muscles. Given the importance of the core muscles in stride generation and the transfer of energy through the lower half to the upper extremity, a core that doesn't feel right or isn't quite strong enough for those extra pitches deep into a game could lend themselves to Verlander choking his stride, with more force and effort put upon the upper extremity, especially the shoulder, to get him to throw his pitches with any consistency and command. With this in mind, let's look at Verlander's release points, across pitch type and month: 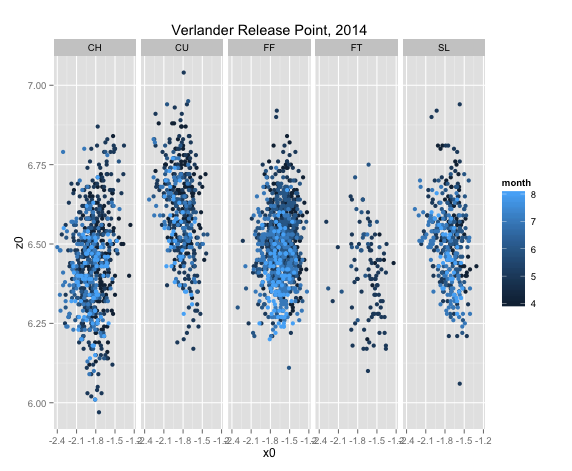 Here, we see that earlier in the season, Verlander did maximize his efforts to stay on top of the ball, perhaps arising from a shortened stride arising from a still-tender core. Later in the season, we do see a more erratic release point, with a trend towards a lowering of his hand, especially with the fastball. There are myriad reasons for this, with a barking shoulder arising from a not quite in shape, or at least a very fatigued, core not out of the realm of possibility.

His command has also become more erratic, with some issues with keeping the ball down in the zone a particular issue:

With the shortened stride, Verlander's ability to pound the zone, especially the lower half, is diminished, with his upper half bearing a lot of the stresses of keeping the ball low in the zone, something that is usually taken care of with an adequately long stride, which is greatly affected by the overall strength and flexibility of the core muscles, in particular, the adductors.

Turning our focus to hitters, the mechanics discussed in pitching as very similar to the classic cocking, acceleration, and follow-through phases of batting, so it isn't a huge surprise the muscles and mechanics involved are similar. Therefore, Miguel Cabrera's sports hernia surgery, also performed in the offseason by renowned athletic pubalgia surgeon Dr. Bill Meyers, similar mechanisms and physiology are involved, but with an added twist—confirmation that the adductor muscles were involved and they were moderately-to-severely torn. Adding to the wealth of information of Cabrera's injury as copmared to Verlander's the slugger recently confided that he is still struggling with the injury and surgery, noting that some days, his muscles don't always 'function properly', well past the typical recovery period for a sports hernia.

As a hitter, Cabrera's injury was probably not sustained in any of the typical and classic hitting phases; the forces generated during a swing are typically so well-balanced and distributed throughout the body and the kinetic chain during the more at-risk period for injury, particularly in weight transfer, that the time and forces needed to create a core tear don't transpire. For most core injuries sustained by hitters, insults occur in a transition phase, often during the first few steps out of the box after putting the ball in play; running the bases and the initiation of sprinting can also create a core muscle tear. In the field, explosive lateral movements lend themselves to tears occurring, with those sustained being of the repetitive, microscopic variety that become exacerbated over time.

Cabrera's injury was of the left groin; with it being on this side and it affecting his lead, stride leg, the injury can manifest itself in a number of ways, many of which sap a hitter of his power. In particular, with a balky stride leg, a hitter is at particular risk for getting pitched inside, with the injury (and the nagging recovery) preventing his foot getting put down in enough time to allow his hips to be properly cleared for his hands to stay inside the ball at contact, all required to barrel up the ball with any consistency or power. This also has a trickle-down effect, in an inability to catch up to elite velocity, especially on the inner half of the plate. Cabrera has hit pitches with velocities of 95 miles per hour and higher at a 5.3 percent clip, down from 10.2 percent in 2013; his whiffs have also increased on these pitches, going from 6.8 percent in 2013 to 11.5 percent this season. Let's shift focus to his swing percentages between last season (left) and this year (right):

Here, we do see Cabrera not swinging as often at the down and in pitch overall, as compared to less injurious times. Looking at his power—in the form of slugging percentage—on a month-to-month basis in comparison again to 2013:

...we again see some confirmation that Cabrera's groin is possibly not fully healed, with it affecting his swing in particular with offerings on the inner half.

In an unfortunate coincidence, the Tigers lost a lot of star power and firepower at the hands of athletic pubalgia this year. Given the complexities of the injury and the importance of the anatomy involved in many baseball activities, its effect on both players has lingered, affecting more than the core muscles, underlining the severity of the injury and its ability to hamper the success of player and team alike.