Brandon McCarthy has been better in NY this season, why?

Did the Yankees see something in McCarthy that Arizona missed?

Share All sharing options for: Brandon McCarthy has been better in NY this season, why?

When Brandon McCarthy was traded from Arizona to New York, there were two questions. One, how would his inflated HR rate react to the short porch in Yankee Stadium? And two, would better defense help the ground ball hurler find better results? We have since learned a third question, were the Yankees right in thinking that a change in his pitch usage would make him more effective?

Brandon McCarthy brought an ugly 3-10 record and 5.01 ERA to the Bronx. He had made 18 starts in Arizona and the traditional numbers told us that he was having a terrible season. Of course, looking deeper, advanced stats people knew that his xFIP was only 2.90, suggesting that McCarthy had run into some tough luck in Arizona. His 20% HR/FB rate would surely regress. As would his .345 BABIP. As a ground ball pitcher - his GB rate ranks 13th among qualified starters this season - eventually positive results would come.

Sure enough, in six starts in New York, McCarthy has pitched to a 2.21 ERA (2.69 xFIP) while cutting his HR/FB rate in half from 20% to 10%. The improved performance largely credited to the Yankees promoting him to use his cutter more often. By throwing his sinker less and cutter more, the logic is that he has become less predictable, and thus, more effective.

We can see the difference in McCarthy's pitch usage between the four-seam, sinker, and cutter using PitchF/X data. In his first 18 starts with Arizona, he barely used his four-seam at all, relying on his sinker the most, and his cutter only 16.4% of the time. Since changing to pinstripes, he is throwing his sinker less, and both his cutter and four-seam fastball more. 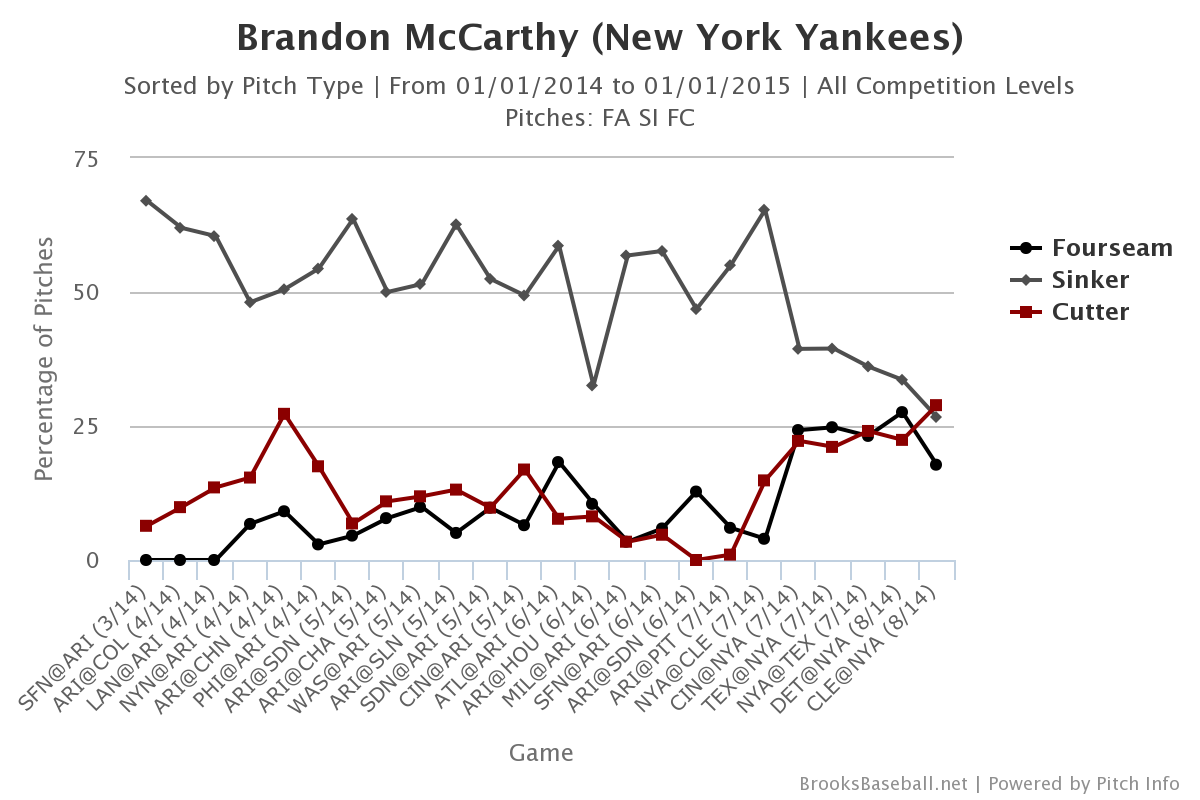 While it is not entirely telling, given the sample size, we can look at McCarthy's pitch values while in Arizona versus New York to see if there is a difference in each pitch's effectiveness. Remember, the run value of each pitch is used to calculate how many runs are saved by each pitch. A positive value is good; a negative value is bad. And in order to standardize for the different usage of pitches, we can look on a per-100 pitch basis.

It looks like the Yankees are onto something. The table above shows that while pitching in Arizona, McCarthy threw his sinker -14.97 runs below average on a per-100 pitch basis. In New York, he is still throwing the pitch below average, but nearly average, saving more than 14 runs compared to the start of the season. Meanwhile, his cutter is twice as effective as it was in Arizona, saving nearly one run on a per-100 pitch basis.

The question of whether the Yankees were right in thinking they could make McCarthy more effective by changing his pitch usage seems to be right.

When Brian Cashman acquired the tall right-hander, the belief was that with better defense, continued success inducing ground balls, and a bit of luck, McCarthy would see his numbers slowly improve. It's hard to say that he has better defense in New York - depending on if you use DRS or UZR, neither Arizona nor the Yanks have particularly strong middle infield defense this year. And since joining the AL East, McCarthy has seen his ground ball rate decline. Ironically, he is giving up more fly balls; just less are falling for home runs. Something not entirely expected knowing that Yankee Stadium augments home runs 7% more than Chase Field.

Brandon McCarthy is not pitching better in New York because the defense is improved (he was greeted in his first game with a costly error by Mark Teixeira) or because he moved to a more favorable park to keep his long flys from turning into home runs. He is pitching better because the Yankees saw something the Diamondbacks didn't. He was becoming too predictable with his pitch selection.

Jeffrey Bellone is an editor and featured writer at Beyond The Box Score. He can also be found writing for the saber-slanted site Inside the 'Zona, and about the Mets at Amazin' Avenue and Mets Merized Online. He writes about New York sports at Over the Whitestone. You can follow and interact with him on Twitter @OverWhitestone.