Who has hit the longest home run at Chase Field during the HitTracker era?

This is it. The momentous shot that turned heads and shook Chase Field for a moment on September 27th, 2008. Home run number 40 for none other than Big Donkey himself, Adam Dunn, carried itself clear past the centerfield fences and straight into Chase Field's massive wall. Not only was this home run the farthest shot in Chase Field's history, but also the longest home run bar none in the HitTracker era (Since 2006).

After being traded from the Cincinnati Reds to the Arizona Diamondbacks during the course of the season, Dunn played his final two months at Chase Field. Remarkably, Dunn was close to achieving his fourth consecutive season with exactly 40 home runs; however, the feat seemed lost when the Diamondbacks played their second-to-last game of the year. He nonetheless proved the doubters wrong, slamming his 40th of the 2008 season with two games to spare (Video here).

Dunn has always been known for the monstrous power that emanates from his 6'6", 285 lb. frame. He is the epitome of a three-true-outcome player, meaning that he leads the league when it comes to the percentage of his plate appearances that result in either a home run, walk, or strikeout. Basically, it boils down to a boom-or-bust debate on whether his home run rate outweighs his strikeouts. Therefore, it's not surprising to see that Dunn has had a 4.7 fWAR season (2004) and a -3.0 fWAR season (2011). Either way, Dunn's raw power is enormous - he just needs to find the right pitch to drill.

Glendon Rusch was the opposing pitcher at the time. Starting for the Colorado Rockies in a last-resort kind of situation, Rusch wasn't what you would call an ace or probably even a marginal starter at the time. In his career, he was a long reliever at times and a starter at others, all with an 88 mph fastball. It's hard to say he wasn't a fighter though, someone that didn't give up on his dream even through all of the grimace-worthy times. Even he'll joke about it. Rusch went on to compile a career 5.04 ERA and 4.27 xFIP with a host of different teams from 1997 to 2009. 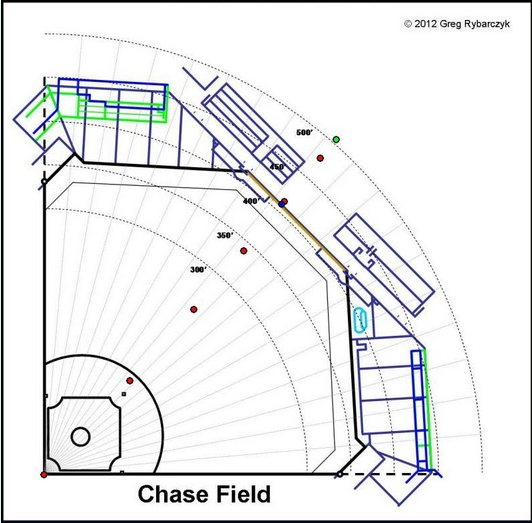 Leading off the bottom of the fourth inning, Dunn stepped to the plate and awaited the incoming first pitch. The first fastball hit the top of the zone and Dunn fouled it off. Next, Dunn laid off a slider and then another fastball for a 2-1 count. Rusch delivered the subsequent pitch straight into the center of the strike zone and watched as Dunn unloaded on the ball, sending it deep, past the outfield fences, and directly into the stadium wall. The solo blast was the first of six runs the Diamondbacks put up in their win over the Rockies. 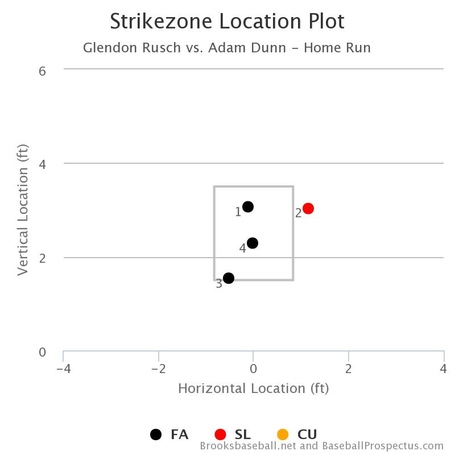 The 89 mph four-seam fastball was fairly streamlined all the way to the batter's box, resulting in a pitch that was located in the lower-middle section of the strike zone. With that in mind, it's important to note that Adam Dunn specializes in pitches that are left in the middle of the zone, resulting in a 24.5% chance that a fastball put in play (2008 only) will end up as a home run.

With the massive power that he can create, Dunn has the ability to launch eye-popping home runs into the seats. At other times, he'll embarrass himself swinging for the fences on a slider. The center of the strike zone is his premier power source, where Dunn doesn't have to track the arc of a breaking pitch out of the zone and instead, use his hulking frame to crush a lifeless pitch. As evidenced by the zone chart below, in 2008 Dunn didn't hit a single home run off of any of the 24 out-of-zone fastballs he put in play. 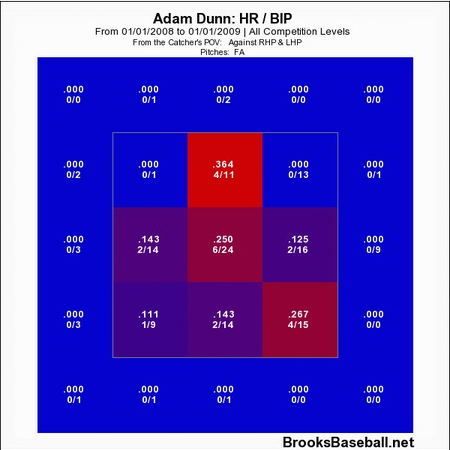 Adam Dunn made history with a single swing of the bat, not by solidifying a win or changing the course of a season, but by driving the cover off the ball at Chase Field. This is one record I don't think anyone would complain about if it was broken again.