With a flurry of moves before yesterday's trade deadline, the Boston Red Sox started preparing their roster for the 2015 season. What will next year's team look like?

Before the season, the Beyond the Box Score staff participated in a preseason poll to predict the upcoming season. Nearly two-thirds of respondents picked the Boston Red Sox to win the AL East.

General manager Ben Cherington raised the white flag this week (no, not this kind of white flag), making six trades, three in the hours before the deadline. 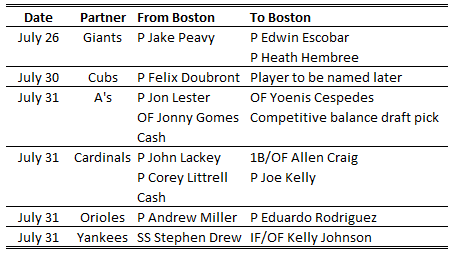 The Sox shipped out all four pitchers to win a game in last season's World Series (Lester, Lackey, Peavy, and Doubront), and are on track to become possibly the first team to go from worst to first back to worst.

But this isn't the typical Marlins-style fire sale. Boston acquired two proven Major Leaguers in Cespedes and Craig, and have over $100 million in salary committed next year. Calling this a rebuilding project is misleading; it's more like reloading.

That's not to say the Red Sox didn't acquire any prospects -- Rodriguez, Escobar, and Hembree were all preseason top-ten prospects in their old organizations -- but the headline deals for Lackey and Lester returned lower-risk Major League regulars. Looking at next year's roster, this is not a team with a five-year plan; it's a team with a two-year plan.

This isn't the 2015 Opening Day lineup, of course, but it does suggest what Boston will be looking to acquire over the winter. Based on previous year's payrolls, the Red Sox still have about $60 million to play with, most of which will probably be spent chasing a top-of-the-rotation arm, a closer, and maybe a third baseman.

At least that's the hope. As currently constructed, this team bears an uncomfortable resemblance to those mid-90s vintages: slow power hitters supporting thin pitching, and a lot of "wait 'til next year."

As for this year? If you're going to Fenway, sit in the outfield, bring a glove, and try to get there for Cespedes's batting practice rounds. You won't be disappointed.

All contract and roster information courtesy of MLBDepthCharts.

Bryan Cole is a featured writer at Beyond the Box Score, and is excited to watch Cespedes the proud tradition of Red Sox left fielders spitting at the fans (like Ted Williams) and tripping over sprinkler heads (like Manny Ramirez). You can follow him on Twitter at @Doctor_Bryan.