Why the 2014 MLB trade deadline was so crazy

The 2014 MLB trade deadline will go down as one of the most memorable ones in recent memory. Multiple MLB level talents were moved as teams jockeyed for position in the various playoff races around baseball. Why was this trade deadline so different from years past?

Share All sharing options for: Why the 2014 MLB trade deadline was so crazy

There was a thought that the new MLB playoff rules have ruined the MLB trade deadline. Specifically, the new CBA instituted a second wild card which meant more teams would be in contention when the July 31st deadline came to pass. Obviously with more teams in contention there would be fewer trades. Articles were written as recently as a week ago about the demise of the trade deadline as a result of the second wild card.

Athletics go all in with Jon Lester

Athletics go all in with Jon Lester

It seems obvious that this is no longer true. For a full list of all the moves made before the deadline, check out MLB Daily Dish's synopsis here. Here's a quick (and incomplete) overview of the most significant moves:

There were obviously more moves, and more pieces to those trades listed above. I just wanted to give the nuts and bolts of some of the largest and most surprising moves. It was a blockbuster of a trade deadline, no doubt about it. So why was this trade deadline so different? Perfect economic conditions, and a greater understanding of what's realistic in the new two wild card format.

It all comes down to supply and demand. In March, there is a relatively stable supply of players available for trade, and a relatively stable demand. Teams don't really know how they're going to perform or what injuries/issues they might have, so relatively few significant trades ever occur. The quantities and prices for players are pretty static. 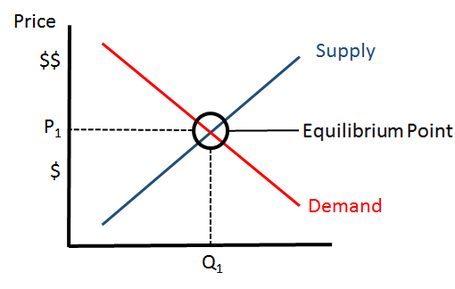 The chart above shows how the supply (blue line) and demand (red line) for trade-able players at this point in the season. The equilibrium point is where the price is set by the market with supply meeting demand at Quantity 1 (Q1) and Price 1 (P1).

Since those 16 teams are not likely to trade their MLB players, supply is shifted to the left, as fewer players are on the market than would have previously been anticipated: 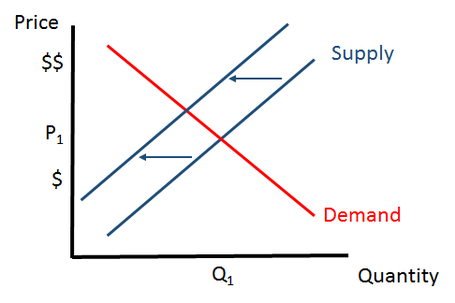 This has a pretty clear result. Obviously the quantity of players on the trade market decreases. Additionally, the price to acquire the players that are still on the market goes up. This is illustrated by MLB's new equilibrium point here: 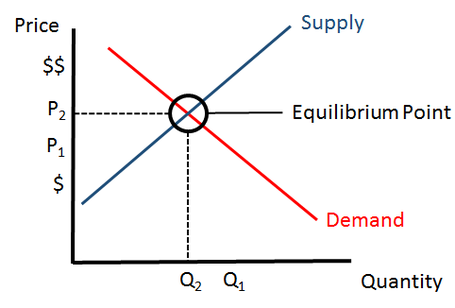 Q2 and P2 are the new points of equilibrium, with players costing those playoff hopefuls more, because there are fewer available. Keep in mind that this is only in relation to this season, as opposed to previous years. It might sound silly to say that fewer players are available when more than a dozen were moved at the deadline, but it's true. If the Orioles, for example, were 8 games out right now instead of in first place, then they'd be shopping guys like Chris Tillman or Chris Davis. As it is, though, the O's are unexpectedly atop their division, removing possible players from the talent pool.

Oakland also impacted the economics of the market when they traded Addison Russell, Billy McKinney, and Dan Straily for Jeff Samardzija and Jason Hammel. What they did was essentially push most of their chips into the center of the table in an effort to out-gun their AL rivals in the playoffs. It was a shocking move that came shortly before the actual trade deadline. This, though, was a signal to competitors that the A's were going to make the moves necessary to make it to the World Series. 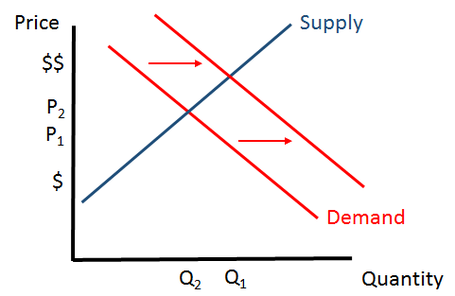 Demand shifted to the right as the playoff hopefuls began making dozens of calls to other teams hoping to acquire new talent to bolster their playoff chances. Beane's initial salvo clearly made other teams take notice. His second salvo, the acquisition of Jon Lester, would only further create a fervor among MLB's elite squads. Several teams were reportedly "flooded" with calls and trade offers. The prices though, would shift, as demand shifted. Teams that weren't initially considering selling would now contemplate it, as the prices went up and the potential returns became more enticing. 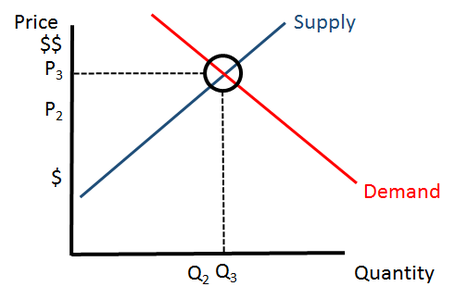 P3 and Q3, that is arguably where the Rays traded David Price in a deal that brought them Drew Smyly, Nick Franklin, and Willy Adames. Many have scoffed at the return for Price, but realistically Smyly is a brilliant pitcher and Franklin could be Tampa Bay's next Ben Zobrist. Adames is also a high upside piece that serves as a nice lottery ticket for Friedman and company.

Dombrowski, aware of the back and forth of the Samardzija, Lester, and Price trades reportedly sent a special tweet to Billy Beane:

Re: Price to Tigers, Beane "had a feeling it was going to happen." Dombrowski jokingly texted, "You have 1 minute to acquire Chris Sale"

If Beane had time, it's possible that he might have attempted to acquire Chris Sale. Granted, at that point the market could have reached its fourth equilibrium point, with the price being even higher than what it would have been earlier that morning.

This was the craziest MLB trade deadline in recent memory. That craziness was the result of basic economic principles, as well as MLB's CBA changes finally showing their full impact. While the CBA has truly deadened the free agent market, it's possible that it has revitalized the trade deadline. The only necessary factor is a clear distinction between the haves and the have-nots. Obviously it doesn't hurt when Billy Beane shakes things up a week or so before the deadline hits.