Both Anthony Rendon and Anthony Rizzo were relegated to the National League's Final Vote for the All-Star Game this year. Now, I'm forced to pick just one!

There's a lot to complain about with the All-Star Game selection process in baseball, but the Final Vote is not one of them for me. I think it has been one of the better developments among the many tweaks made to the game over the years. The Final Vote allows fans one last chance to push for their guy. It allows players and teammates to make ridiculous campaign videos. It allows us all to realize just how many good players there are in the game today. But this year, it's different. Both Anthony Rizzo and Anthony Rendon missed the first cut and were pushed into the National League's Final Vote. That's a problem. How in the world am I supposed to choose one Anthony over the other?

I'm not writing this simply because I voted for both Rizzo and Rendon in our Beyond the Box Score All-Star ballot. I'm not that bitter. No, I'm writing this because this year, it's personal. I know you're imagining me, with a laptop dangling from my hands, a huge explosion in the background, and the tag line - "This year, it's personal" - over a movie poster for the National League Final Vote. And if you are, good. You should be. My personal connection runs deep with Anthony Rizzo and Anthony Rendon. I mean, I didn't help Rizzo pick out his high school prom tux or anything. I didn't help Rendon learn to approach the more veteran Ryan Zimmerman. I didn't sit in either player's basement playing hours of Battletoads on a Nintendo. But the connection is there.

Anthony Rizzo came to the Padres from the Boston Red Sox in the trade that sent Adrian Gonzalez away. That was both sad and exciting. Rizzo would be coming to Triple-A Tucson, and I lived in Tucson. I was going to be able to see one of the better prospects in baseball before he ever made a Major League lineup. I watched him destroy Pacific Coast League pitching in person, and when it came time for his call-up to San Diego, I was there. I spent a lot of time in San Diego when he was called up, and I watched him struggle. I reached out (physically over the ballpark railings) wishing I could help Rizzo with his early struggles. But alas, I couldn't. He was traded away to Chicago in exchange for the pleasantly surprising Andrew Cashner.

As for Anthony Rendon, my connection began when I moved to Washington, DC in April of last year. The 2013 season was Rendon's rookie year, so I watched as he began to make a name for himself in the District and around baseball as a whole. His slick fielding ways earned him a permanent spot in my heart. His ability to hit solidified that spot. Before I left DC, I watched as he was able to move back to his natural position - third base. I was filled with so much joy. He was finally able to shine, and shine he did.

Now, we're here. Analyzing the two Anthonys closest to my heart. And I have to choose just one. So let's stop messing around and get down to business. 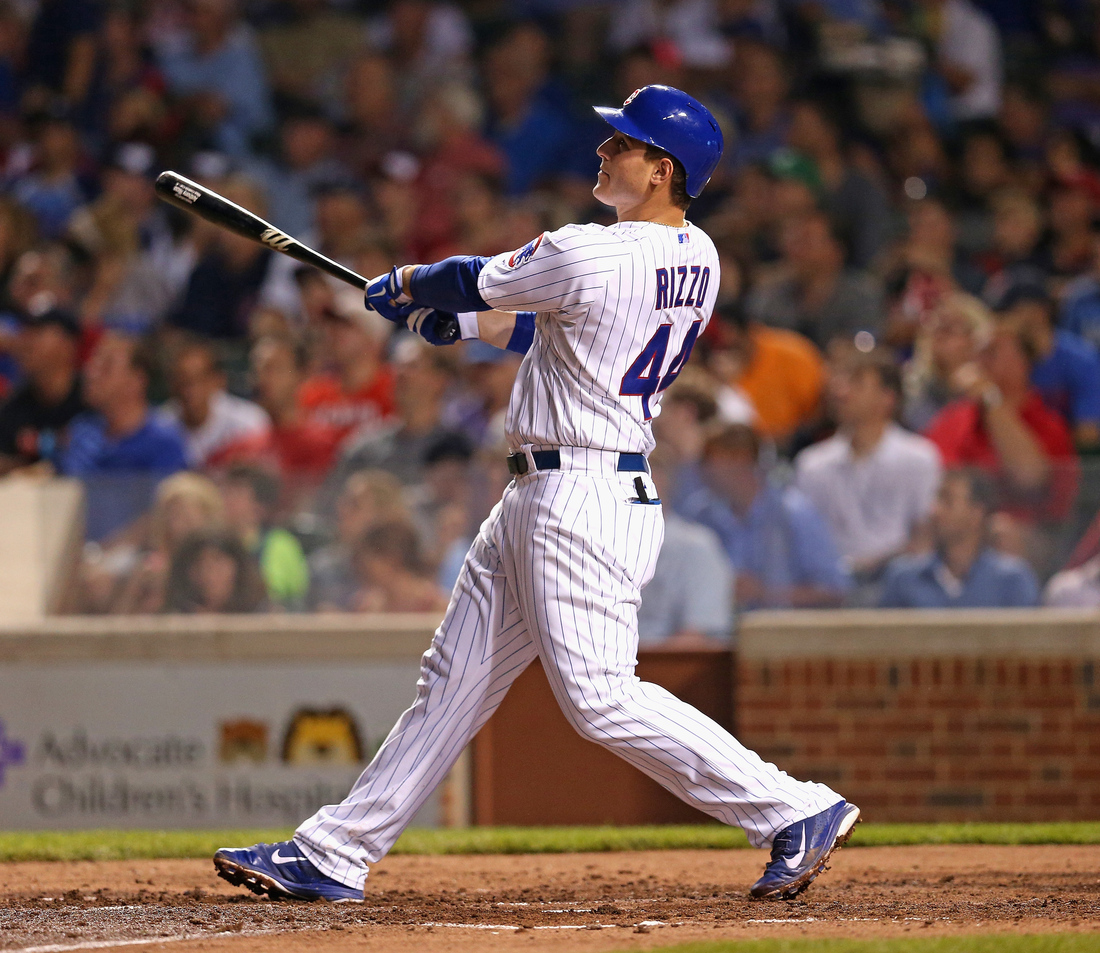 Rizzo has been a confounding player in many ways. His first year in the Majors, in 2011 with the Padres, was a complete bust. He played in 49 games and posted an OPS of .523. In case you're wondering how bad that was, his OPS+ was 49. The Padres sent him back to Triple-A before eventually shipping him off to Chicago. In Chicago, Rizzo has managed to bounce-back. He started in their minor league system rather than immediately coming up to the Major League club. Perhaps that helped. In 2011, Rizzo played in 87 games for the Cubs and saw his OPS shoot up to .805. In 2013, he played his first full season, 160 games, and posted an OPS of .742. This year, though, has been Rizzo's breakout year. And since All-Star selections are based on the half-season preceding the event, we'll focus on those numbers.

Rizzo has reduced his K% from 30.1% in his first year with San Diego all the way down to 17.8% this season. To put that in perspective, his K% in 2011 would have ranked him toward the bottom of all of baseball. This year, he's in the middle of the pack. The reduced strikeouts likely comes as a result of more patience at the plate. Rizzo is swinging at fewer pitches than at any other point in his career. His swing rate is at 42.4% this season which has helped him achieve a BB% of 13.5% - his highest rate since coming to the Cubs. The patience at the plate has allowed Rizzo to pick his pitches better which has translated to more power in his case.

From a power perspective, Rizzo .212 ISO is the highest of his career. He has 17 home runs already and is projected (by ZIPS) to finish with 30. That would be a career-high for the 24-year-old. Rizzo's ISO ranks him 25th in all of baseball. He sits ahead of Yoenis Cespedes, Yasiel Puig, Carlos Gomez, and our friend Anthony Rendon on the leaderboards. This power surge has helped Rizzo to a 140 wRC+ this season so Rizzo is hiting 40% better than league average.

Finally, Rizzo's fWAR is already at 2.5 which, 85 games into the season, is already a new career-high. ZIPS projects him to finish with a 4.1 fWAR season. That's the type of performance that should earn an All-Star Game appearance. In fact, 5+ is what Baseball Reference defines as a sure All-Star player. Rizzo's projected 4.1 fWAR this year should definitely garner him some serious consideration.

This year, the Chicago Cubs have two players on the All-Star team who actually have earned it, rather than have someone just because every team has to have a representative. There is a catch to the second selection, though.

It's official: the Nationals' participant (singular) in the 2014 MLB All Star Game (which is even more totally relevant than ever, Serious You Guys) is Jordan Zimmermann, elected by the players. Rendon made it into the final five.

Rendon has been one of the more flexible players in the league. He came up with the Washington Nationals last year as a second baseman. Ryan Zimmerman occupied Rendon's natural position of third base. However, Rendon played both shortstop and third in addition to second base last year. This season, with Zimmerman's shoulder acting up, Rendon was able to shift back to third for a larger chunk of the season. He has played 71 games there and only 19 at second in 2014. That looks like it's going to change going into the second-half of the year, but Rendon's time at third base this year puts him firmly in the position's All-Star debate.

In 2013, Rendon came aboard a team that was looking to return to the playoffs after making the postseason for first time since they were the Montreal Expos. The Nationals struggled in 2013, but it was not for a lack of production from Rendon. In his rookie year, Rendon managed a league average wRC+ of 100 and his wOBA was .317. That put him near the middle of the league on the leaderboards. Of course, this was just year one for the youngster. In 2014, he has done nothing but improve.

In 83 games this year, Rendon has already posted a higher fWAR than Anthony Rizzo. His defense has been a big part of that disparity. Rendon has already amassed 3.1 fWAR and is projected to finish the year with 4.6 fWAR on the season. Again, his WAR is propelled by his defense. Being able to shift back to his natural position has helped. However, Rendon is no slouch with the bat.

So far in 2014, Rendon has a wRC+ of 129 and a wOBA of .357. His wOBA ranks fourth among all Major League third basemen and ranks second among National League third basemen. Rendon's 12 home run may suggest there's something left to be desired in the power department relative to Rizzo, but his .201 ISO is still impressive. His power numbers comes not just from home runs but from 21 doubles and 5 triples.

Oh, and just for fun, let's throw in the fact that Rendon has stolen eight bases on the year. His fielding, offense, and base running all rate as positives for Rendon's value in 2014. 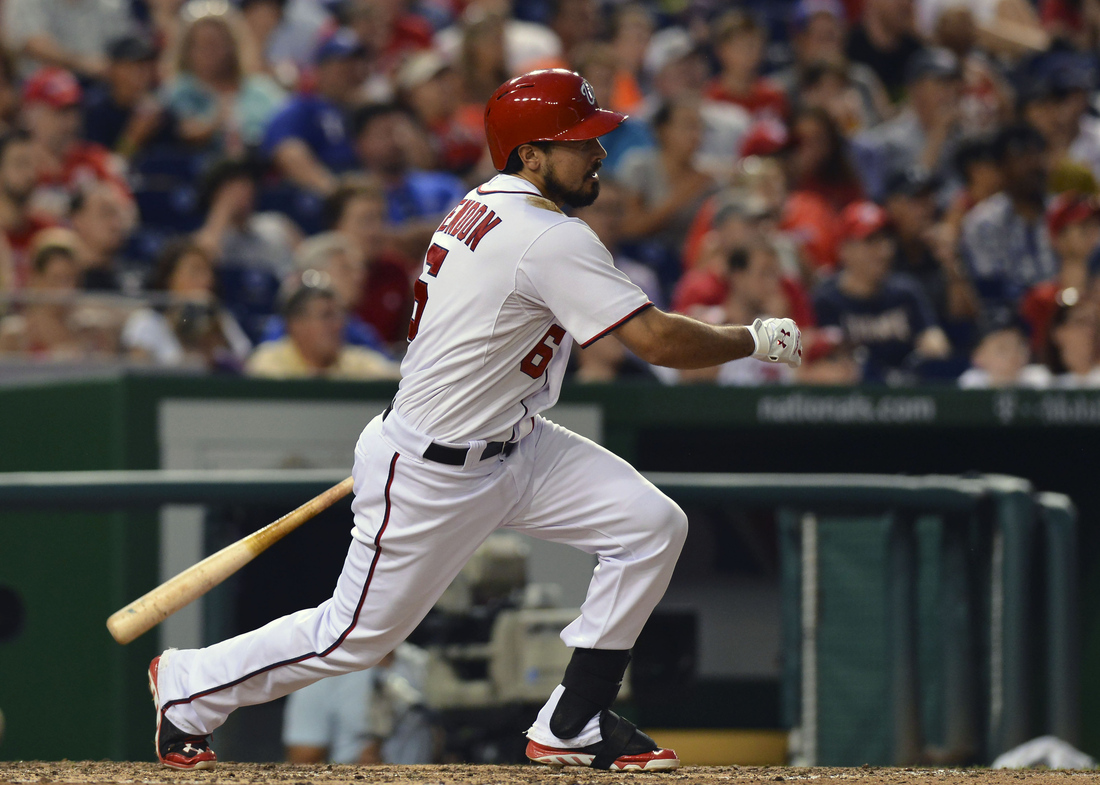 Anthony Rendon is the winner here. It's always fun when you come into something with a preconceived notion only to prove yourself wrong or talk yourself out of something. I began writing this with the belief that I would vote for Anthony Rizzo in the Final Vote. However, after looking at the numbers, Rendon is clearly the choice for me. His value as a whole is so impressive, I can't understand why he's even in the Final Vote. Rizzo is having a monster season, and I would expect seasons like that to continue. Rendon, though, is having one of the best third basemen seasons of the year.

Sorry, Rizzo. We'll always have our memories of Tucson and San Diego.

Justin Hunter is a contributing writer to Beyond the Box Score. He also cries about the Padres at his site, The 5.5 Hole. You can follow him on Twitter at @the5_5hole.