Continuing a series in which players are reviewed by position. This post covers third base.

For the past week I've been stumped trying to figure out who I was going to call the best third basemen in baseball -- it's that close. As I work my way through the positions and evaluate the players with my method, I couldn't help but be struck by how many very good third basemen there are this year. Here's the scatter plot graph: 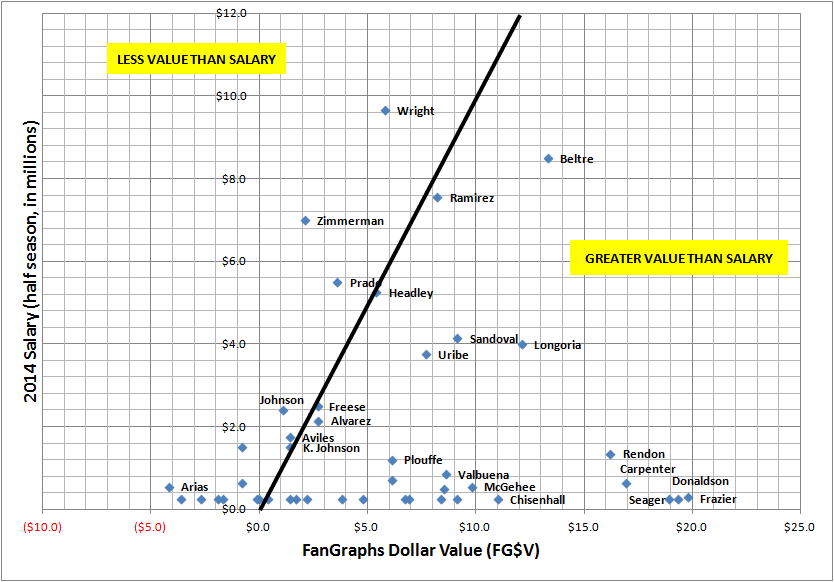 The horizontal axis represents FanGraphs estimate of the dollar value (FG$V) players have produced so far this year. The vertical shows 2014 salaries divided in half to reflect that only around half the season has been played and is taken from this Deadspin article. Data for this graph is through Friday, July 4th, and updated data can be seen here.

Since succeeding Scott Rolen as the Reds third baseman Todd Frazier has been a solid player -- not stunning, not spectacular, but certainly a player delivering value for a Reds teams poised for success as constructed. In 2014 he's ascended into the stratosphere by hitting for the best average in his career and is three home runs from topping his career high. He's under team control for the foreseeable future and will be one of the reasons the Reds future looks so bright.

What's up with Josh Donaldson

What's up with Josh Donaldson

I wrote a post some time back with my early thoughts on the MVP races and stated that Josh Donaldson would be in the thick of that discussion. Nothing has changed my mind in that regard, but his average gives me pause -- a Donaldson who is more selective at the plate would be downright terrifying. His plate discipline numbers are fine, and with a .261 batting average on balls in play, he may be due some luck. I suspect most of what I've written is latent disappointment in the Cubs trading him to the Athletics in 2008.

The player I shouldn't be surprised by is Kyle Seager, who's been very good since becoming a regular in 2012. He's also under team control through 2018 and has the additional benefit of being two years younger than either Donaldson or Frazier. Very quietly the Mariners may have put together a playoff-capable team -- they've had the pitching since acquiring Hisashi Iwakuma to augment Felix Hernandez, and with the Rangers set back with the loss of Prince Fielder, this could be their year. They're not helped playing in the same division as the Angels and A's, but they're a combined 11-8 against those teams so far this year.

Matt Carpenter and Anthony Rendon, are also young, 28 and 24 respectively. Carpenter was outstanding last year and hasn't been able to maintain that production this year, mainly due to not hitting doubles in every at-bat as he seemed to do last year. Rendon's story is as old as baseball, taking advantage of the opportunity afforded by an injury to Ryan Zimmerman. Now that Zimmerman is back it will be interesting to see where he plays -- he saw significant time in left when Bryce Harper was out, but now he's back, so there's going to be some shuffling in the Nationals' lineup.

Lonnie Chisenhall had trials with the Indians in the last couple of years but his trial period appears to be over with an OPS of .944. He needs to work on his defense and affords the opportunity to discuss the importance (or perhaps lack thereof) of defensive ability at third. I do not blithely disregard the need for some defensive ability at the position, but consider the following regarding one of the more defensively-challenged third basemen in recent memory, Miguel Cabrera. These are his 2013 numbers:

Cabrera in the field had an opportunity to make 383 plays and committed 12 errors -- one on a catch, five fielding and six throwing. These are his errors:

Errors only hurt if they allow runs to score. In Cabrera's case only three of the twelve errors resulted in runs. Contrast that with his hitting -- in his 652 plate appearances there were a total of 448 baserunners, or an opportunity to drive in a run 1100 times. Traditional metrics only measure baserunners scored, so I've adjusted it by looking at how many of the potential 1100 runs actually scored, which was 139 in his case. Let me be clear -- I understand Cabrera is one of the best hitters in the game, but any of his defensive "shortcomings" are so overwhelmingly trumped by his offensive ability as to be laughable. My ultimate point is simple -- defense is important, and even if we assume that Cabrera's range prevented him from getting to twice as many balls as he actually fielded (which is ridiculous), he still had many more opportunities to make positive contributions with his bat, and this is the same for other third basemen as well. Bringing this all back to Chisenhall, if he continues to hit like he has this year, his fielding will be irrelevant.

I'll lump David Wright, Adrian Beltre and Aramis Ramirez together, since they're the highest-paid third basemen and all delivering value commensurate with their contracts. Beltre appears to be coming back to Earth after a very solid stretch from 2010 to 2013. It's important to remember that even though it seems like he's been playing forever he's still only 35 and probably has a couple good years left for the Rangers.

One of my main questions regarding the Brewers this year was if Aramis Ramirez would return healthy after an injury-plagued 2013. He had a stretch in May when he was out but seems to be back, batting .320 with a .950 OPS since returning in June. The Brewers had a lot of question marks that all seem to be coming together quite nicely -- Jonathan Lucroy continues his development, Scooter Gennett is playing very well, Ramirez and Ryan Braun seem to have rebounded from 2013 issues and Khris Davis allowed Braun to move to right.

One of the more curious signings in recent memory was when David Wright signed new paper prior to the 2013 season. I was intrigued the Mets would sign him for eight years and that he was interested in staying with a team that has been floundering for some time and don't appear to be on the verge of success any time soon. His power seems to be on the decline as well as the number of walks he takes, so for the Mets' sake I hope it's just an off year and not a sign of him entering the decline portion of his career.

Luis Valbuena and Casey McGehee could be nice (and cheap) additions for teams looking for help at third base (that's you, Kansas City). Juan Uribe could join that list if Justin Turner returns from the DL and is able to maintain the production he's had so far -- Turner is one of the unlabeled points near Valbuena. Uribe, in particular, has multi-position flexibility and is relatively affordable.

Also unlabled at the bottom and by the $5M FG$V mark is Manny Machado, the Orioles all-world third baseman from last year, who had surgery in the offseason and hasn't quite bounced back. In addition to decreased offensive production, he's also developed some odd habits on the field, and it's hard to tell if that's who he really is or if he's simply frustrated. He's still delivering value, just not as much as expected given his blistering start last year.

As I write these posts, it's hard not to see a trend -- there are typically around 8-10 players at each position who are All-Star caliber, another 8-10 who won't hurt a team and the rest are replacement-level players who need to watch their backs. This year, at this particular time, it appears third base has a plethora of strong players, many of whom are young, suggesting this could be a Golden Age of third basemen. This chart shows Baseball-Reference WAR values for players who were primarily third basemen since 1998: 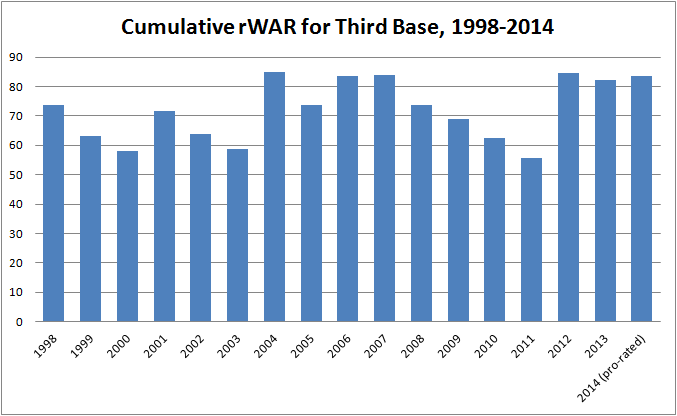 The 2014 value is pro-rated. At this time there are a significant number of young, inexpensive third baseman who are delivering value, quite possibly more so than at any time in recent memory. I had to go back to 1998 to find a season in which the top three fWAR third basemen were 28 or under -- Chipper Jones, the aforementioned Scott Rolen and Jeff Cirillo (?). Of this year's top eight, only Adrian Beltre is over 28. Enjoy it while it lasts, and take heart in the knowledge that it might last for quite some time to come.