It's time for our annual tradition! Presenting the Beyond the Box Score staff votes for the 2014 All-Stars!

Every year, people get wrapped up in their All-Star Game selections, and spend time considering who they'd like to see in the game's biggest showcase of talent. We here at Beyond the Box Score are no exception at all. And so, each season, we poll our staff and vote for the top talents of the season to make up our "official" All-Star team.

Starting today, we'll roll out our selections -- with picks for NL and AL All-Star starters. Early next week, we'll let you know who we chose as our reserves. And we believe in transparency, so we'll provide a spreadsheet or three with all the votes of our staff, so you can perhaps get a glimpse into who was considered, and how much.

So let's go over our what criteria I asked our writers to use when deciding on this year's All-Stars.

That's it! Here are our NL starters and the vote results!

Though many players on the Diamondbacks have faltered this season, Paul Goldschmidt has simply picked up where he left off in 2013 -- the season in which he was the Beyond the Box Score All-Star starter at DH. Goldschmidt is one of the premier hitters in all of baseball, with the combination of power, patience, and hitting ability that you look for in the prototypical modern slugger. At the halfway point of the season, Goldy has a very impressive .305/.395/.536 triple-slash line, good for 54% better than the league average.

While Joey Votto is usually a lock for this spot, his injury and power drain have contributed to a ho-hum start to the year … at least in Joey Votto terms. As you can see from the voting totals, Votto didn’t get a single first place vote after winning this spot last season. Those writers who didn’t vote for Goldy all chose Anthony Rizzo over Goldschmidt. 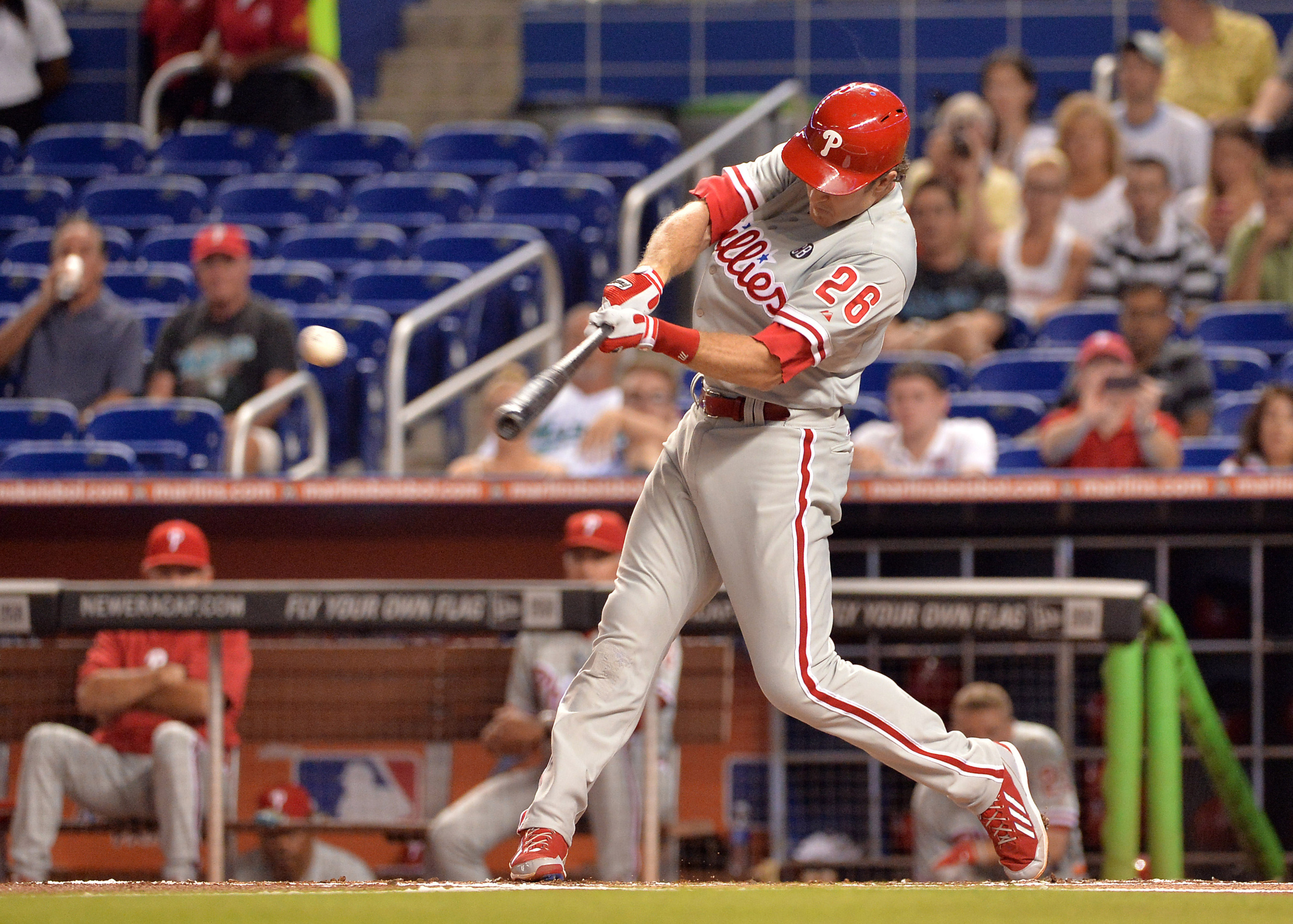 Don't call it a comeback. He's been here for years. After a red-hot start to the season, Utley has cooled as the season's gone on -- but he still has the all-round skills to make him a no-doubt selection to the 2014 All-Star team. He's always been an elite defender and an elite baserunner, and those skill haven't diminished too much with age and injury. His woes from previous seasons (knee injury, playing for the Phillies) don't seem to be hurting him in his quality age-35 campaign. 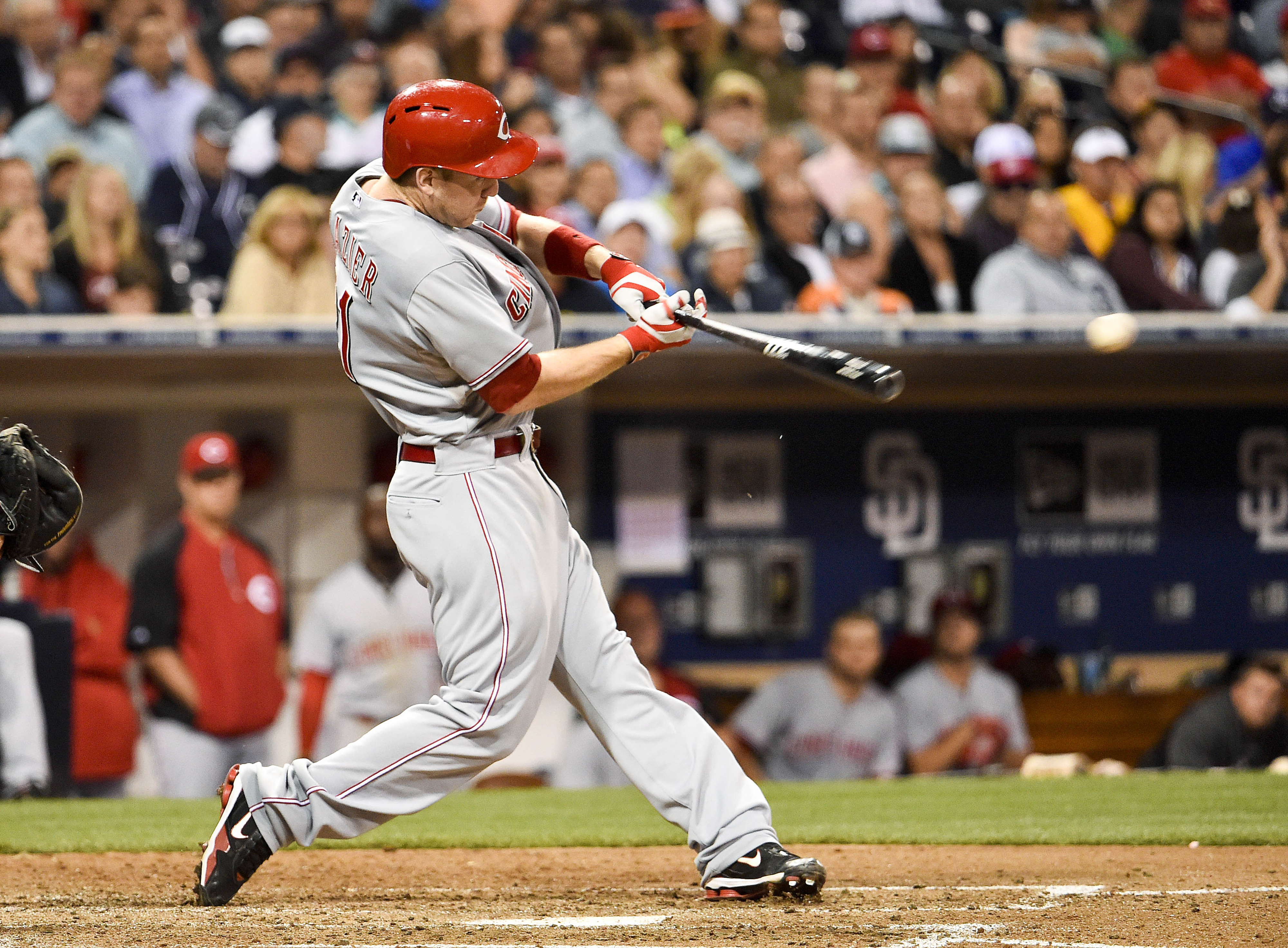 Todd Frazier is a riddle, wrapped in an enigma, nestled within a bacon double cheeseburger. After a strong offensive 2012, Todd's 2013 wasn't what people wanted. They wanted the dingers and the rib-eye-steaks and the memory of Adam Dunn, except at third base. Instead, Frazier was a so-so hitter with some solid defensive numbers. This year, he's mashing to the tune of 17 homers and hitting 39% better than the league average.

Reds fans are getting what they want from their third baseman, but he's secretly also providing good baserunning value (13 stolen bases) and good-enough defense at the hot corner. That's plenty to put him ahead of wunderkind Anthony Rendon, the steady Matt Carpenter, and the incumbent All-Star: a slumping David Wright. 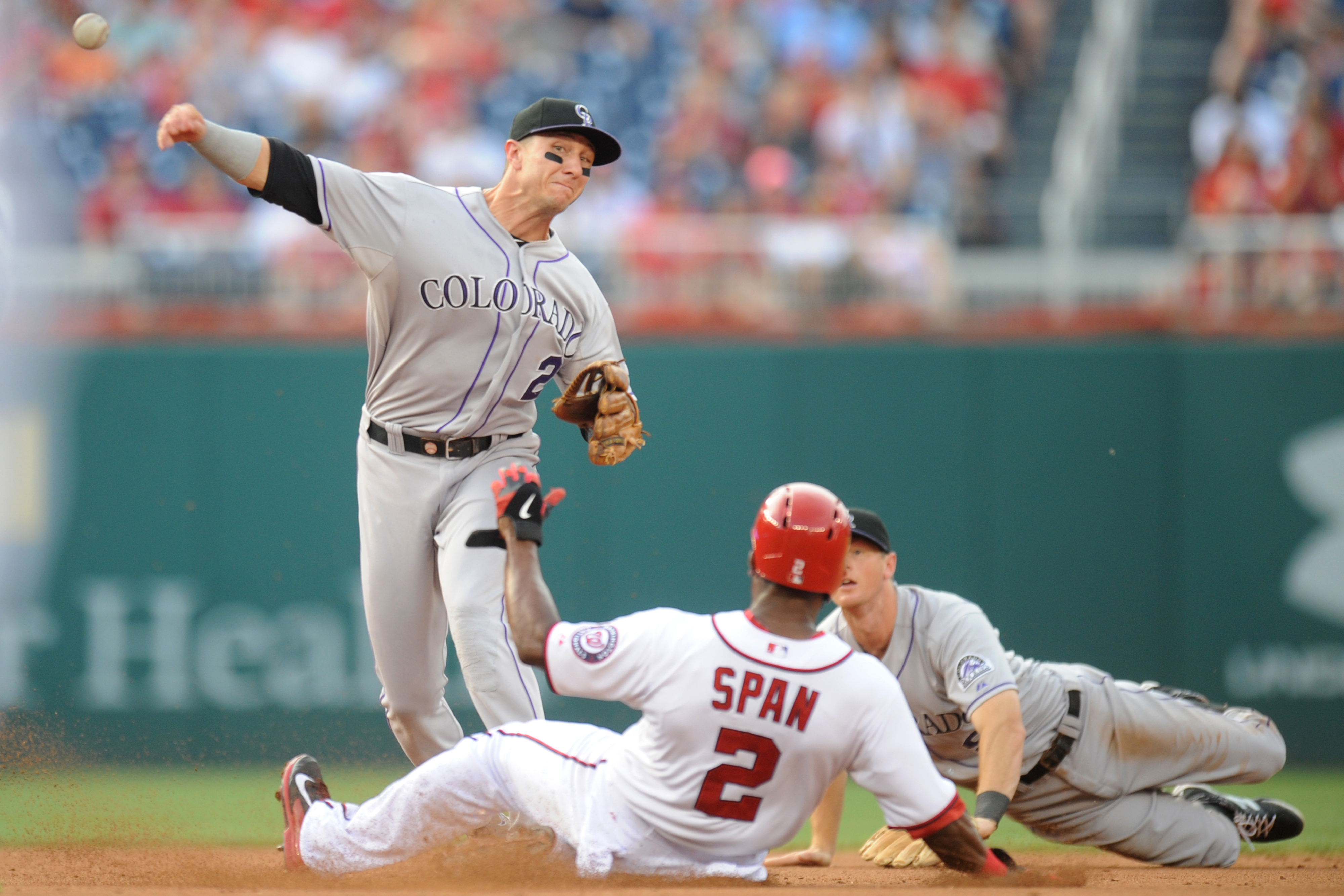 The only National League player to repeat as a starter in the same position as last year (sorry, Paul Goldschmidt) is the best player in the National League: Tulo. He is absolutely bonkers this year. He's hitting for average, power, and walking at an unbelievable rate. He's a great defender at the second-toughest position on the diamond. He's single-handedly giving Mike Trout competition for the best overall player in baseball. Sure, he's the poster boy for "as long as he stays healthy" -- so much so that I'd like to change his name to ALAHSH Troy Tulowitzki.

Tulo is one of two NL starters to earn a unanimous vote. The other guy is a little more unexpected ... 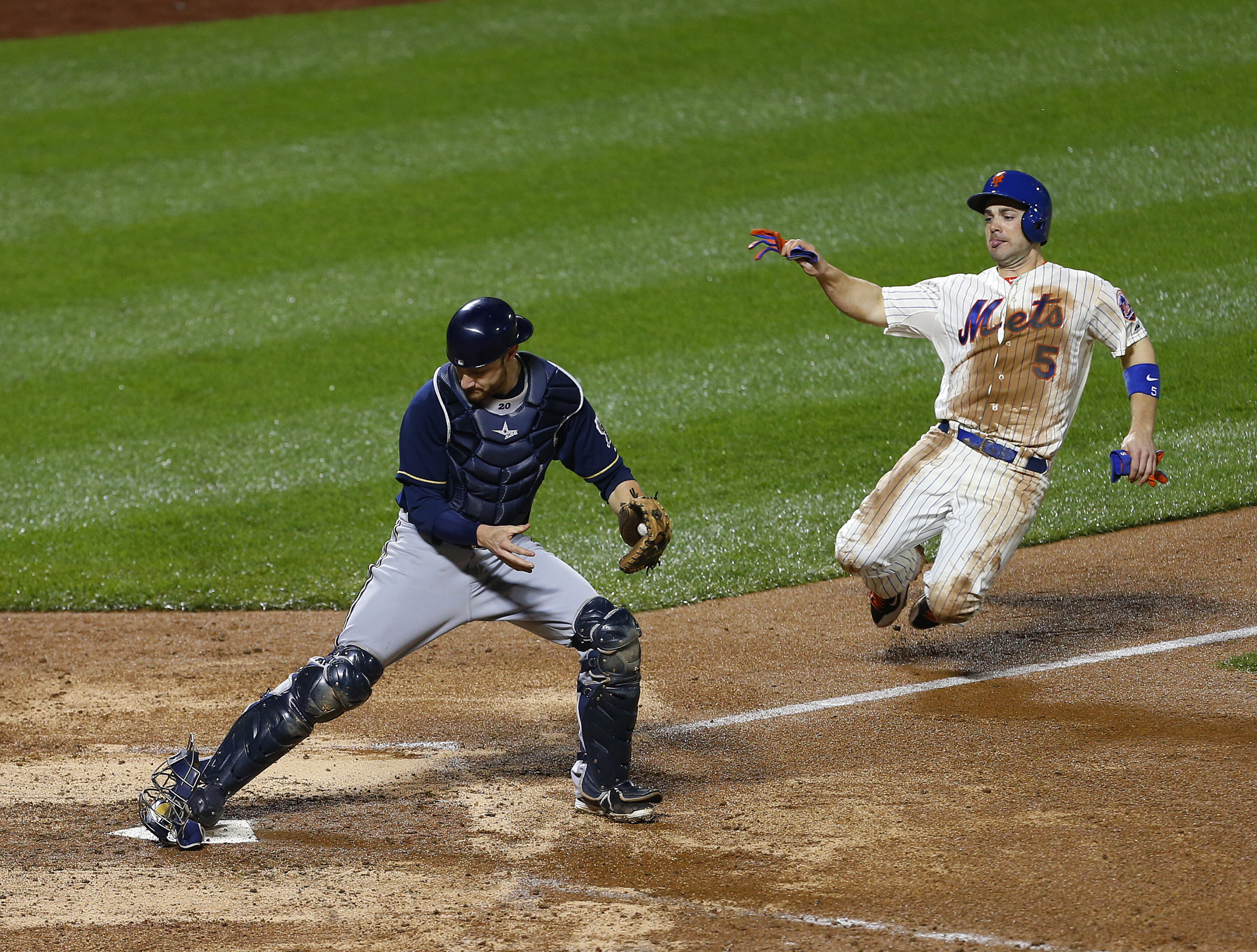 Yep, you guessed it. Jonathan Lucroy was cited by the BtBS writers as not only the best catcher in the NL, but he was a unanimous choice. That's right. In a league with Yadier Molina and Buster Posey and Evan Gattis and Whatever Happened To Devin Mesoraco, this guy from Milwaukee is the bar-none winner and champion.

Lucroy has always been an underrated player with excellent defense. But this year, he's done a lot to improve his offense from above-average to top-five hitter. His power really hasn't changed, but he's upped his walk rate and benefitted from great batting average on balls in play. But the secret skill that Lucroy excels at is framing -- he adds an additional win beyond his regular wins above replacement metrics, which already have him as one of the best player in the game.

That addition has been enough to push him out of the best-catcher discussion and into the maybe-MVP discussion. I guess catcher framing does matter.*

* - Actually, expect a tirade regarding how framing was disregarded once we get to the AL starting catcher and NL reserves. 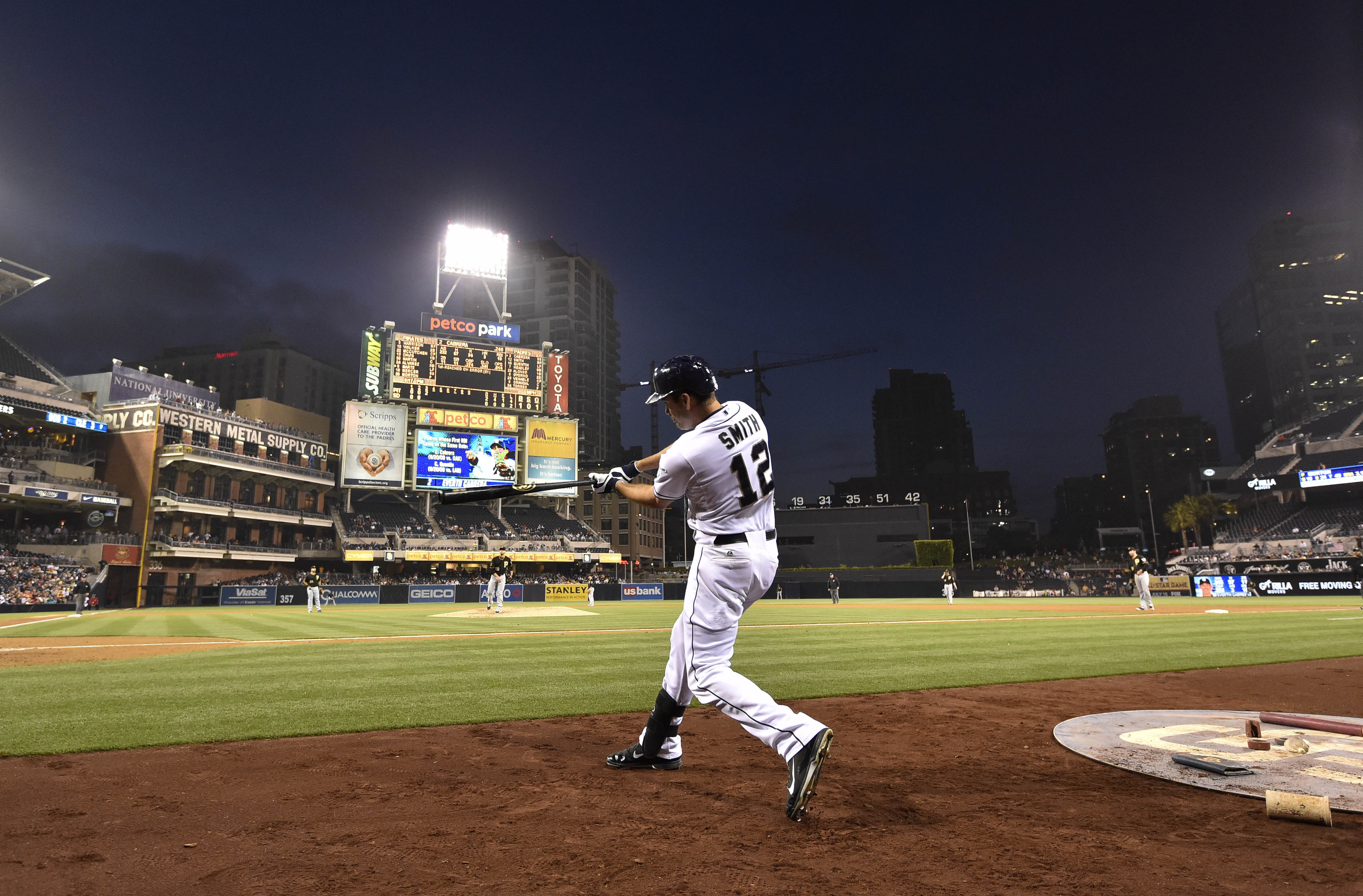 As discussed on the second episode of The Shift (the site podcast), National League left field was an exceptionally tough choice. Since Bryce Harper has missed much of the season with injury and Starling Marte and Justin Upton haven’t quite lived up to expectations, the door was open for someone to jump into an All-Star berth. Seth Smith has jumped through that door.

In the end Smith only managed seven votes, but that was enough to thrust him into the starting lineup. As you can see, our writers did everything they could to shoehorn in guys who play different positions (Stanton, McCutchen, Braun) instead of having to vote for other guys.

Also, I assume that Justin Schultz voted for Michael Morse simply as a protest vote. 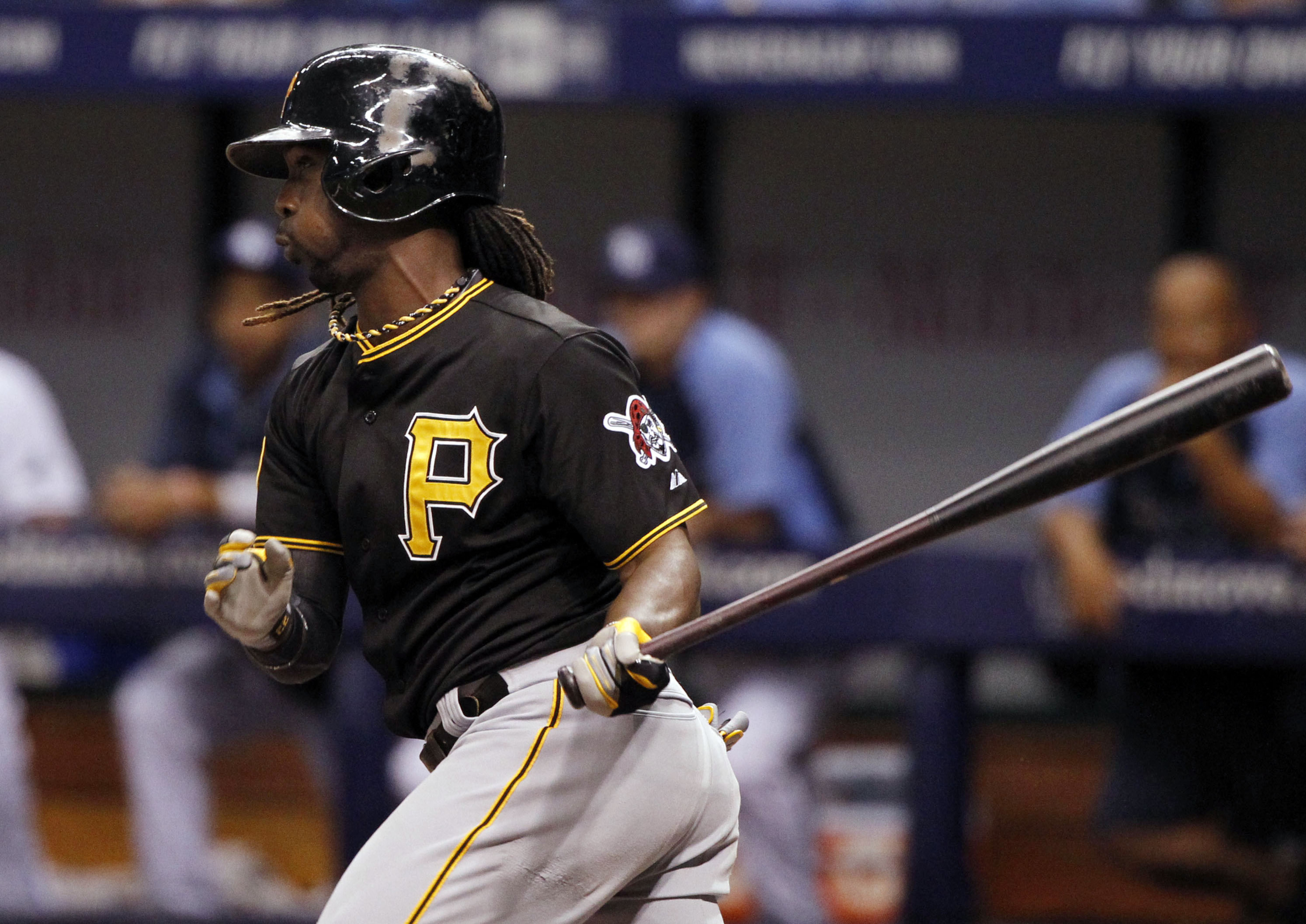 Seriously, I don't know what more else there is to say. He's the reigning MVP. He does everything well. Like, everything. In fact, here's a comprehensive list of all the things he does NOT do well:

A shift to left or right field may hurt his overall wins above replacement totals over the rest of his career (thanks to the positional adjustment), but may allow him to become a plus fielder. But seriously? It doesn't matter. In spite of another uber-talented outfielder sharing his division -- we see you, Carlos -- his bat is too strong to ignore. 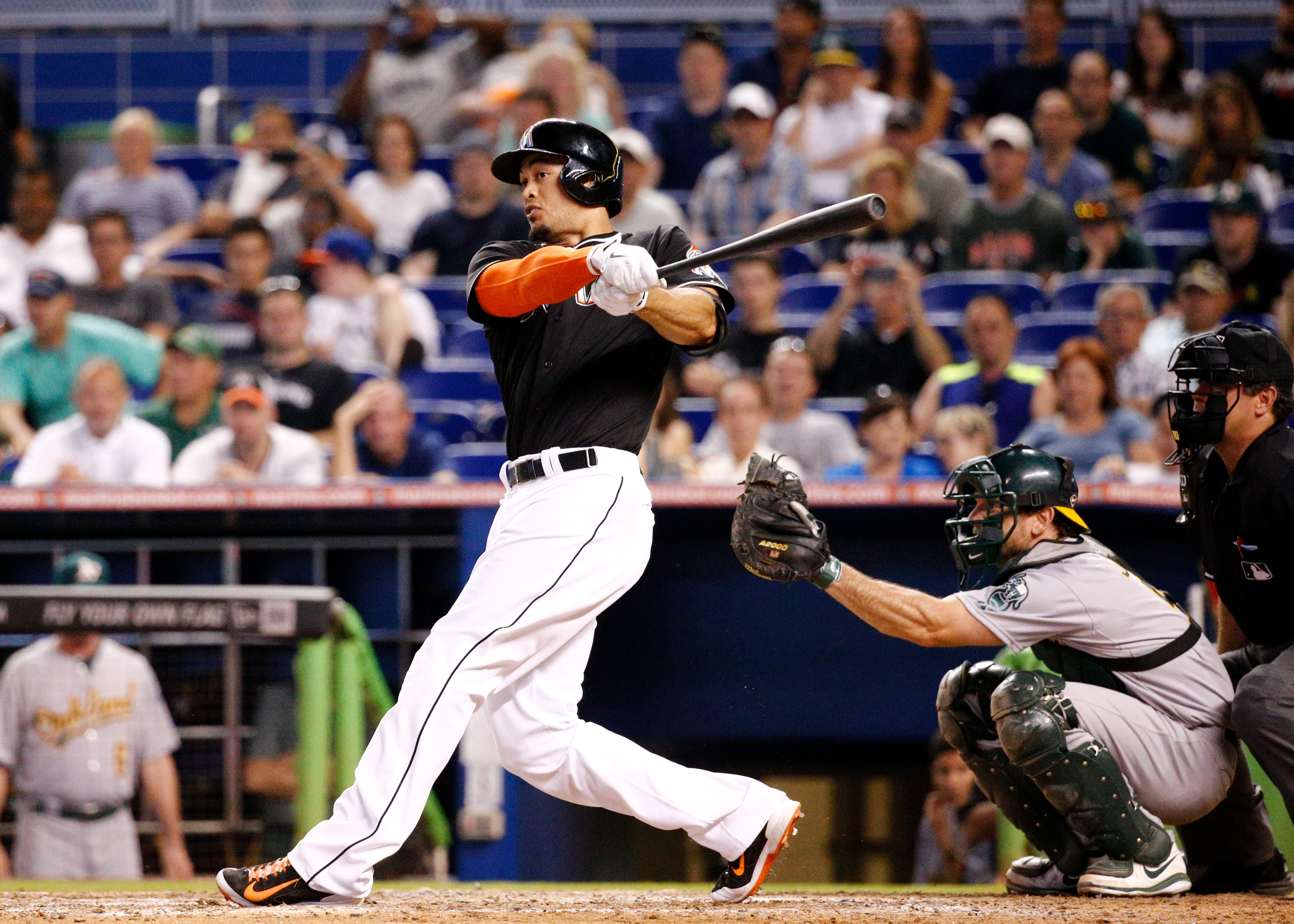 Right field is actually kind of loaded in the NL this year, with a few very deserving All-Star candidates. But in a field of good hitters, Giancarlo is still the biggest, baddest bat of them all. He's delivering on the potential 80-grade power bat scouts have been dreaming on for years, already having hit 21 homers and posted a .574 slugging percentage. And sure, he still strikes out a lot, but he's walking at an impressive clip as well -- though some of that is aided by a major-league-leading 15 intentional free passes. 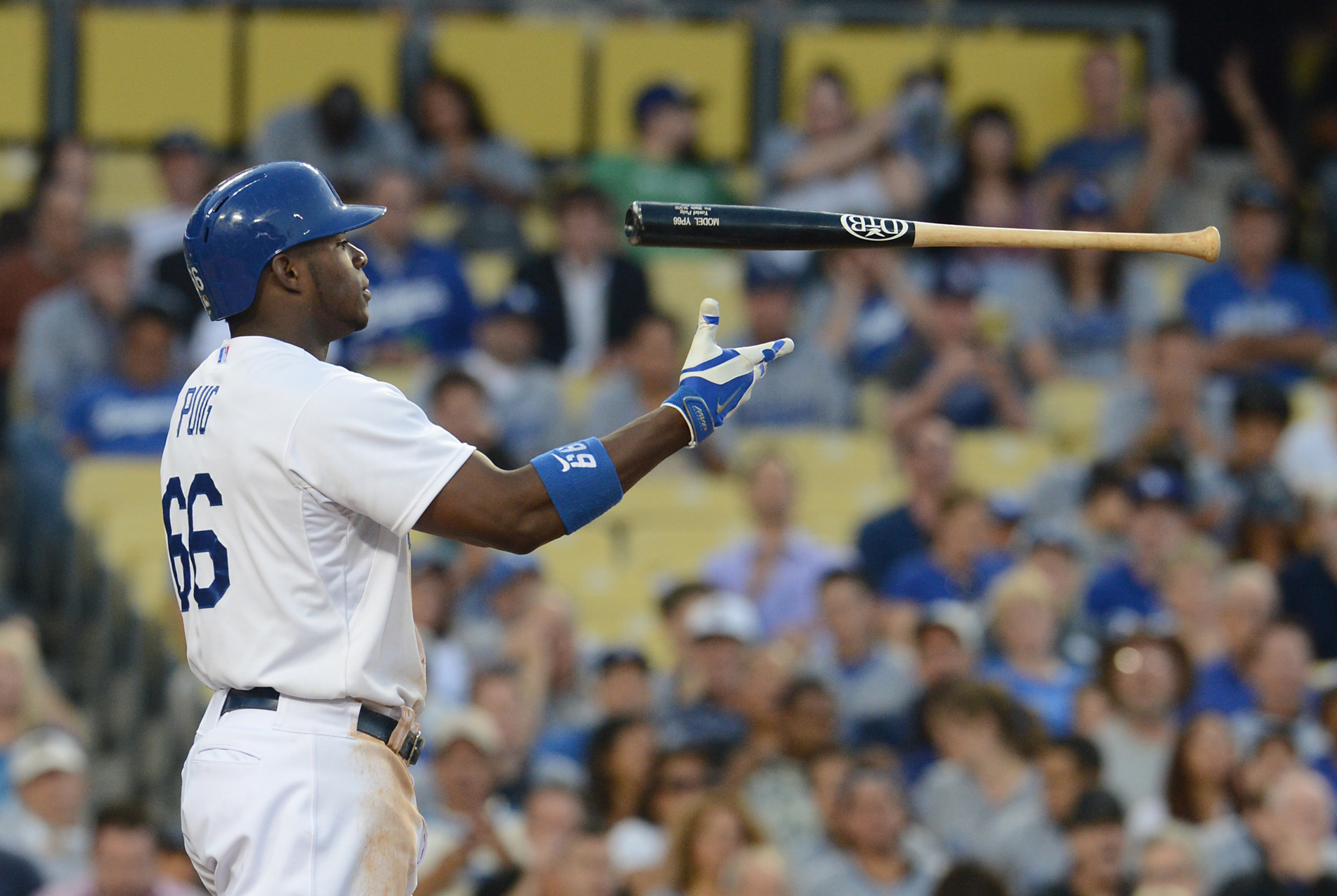 No one has swag like Yasiel. He's following up on his unbelievable debut campaign by improving on almost every level. His baserunning is better, and more efficient. His walk rate (11.0%) is up and his strikeout rate (19.7%) is down. He's already got 12 homers this season after 19 during all of last season. Only his defense is slipping from last season, despite staying far away from center field.

It also doesn't hurt that he has the attitude and charisma (and bat flipz) that make him one of the most dynamic and polarizing characters in the game. He puts the "Star" in "All-Star", and our staff couldn't resist putting him in the game as a starter, despite the massive season Giancarlo Stanton is having ahead of him.

A quick item here: we’ve altered our voting system so that the DH was selected during the reserve voting, rather than the starters voting. That’s why you may see some weird stuff in the vote breakdown below. At any rate, you’ll see Yasiel’s vote spreadsheet in our reserves post … and you’ll see why he was limited in votes here (spoiler: he received many, many votes as right field reserve). 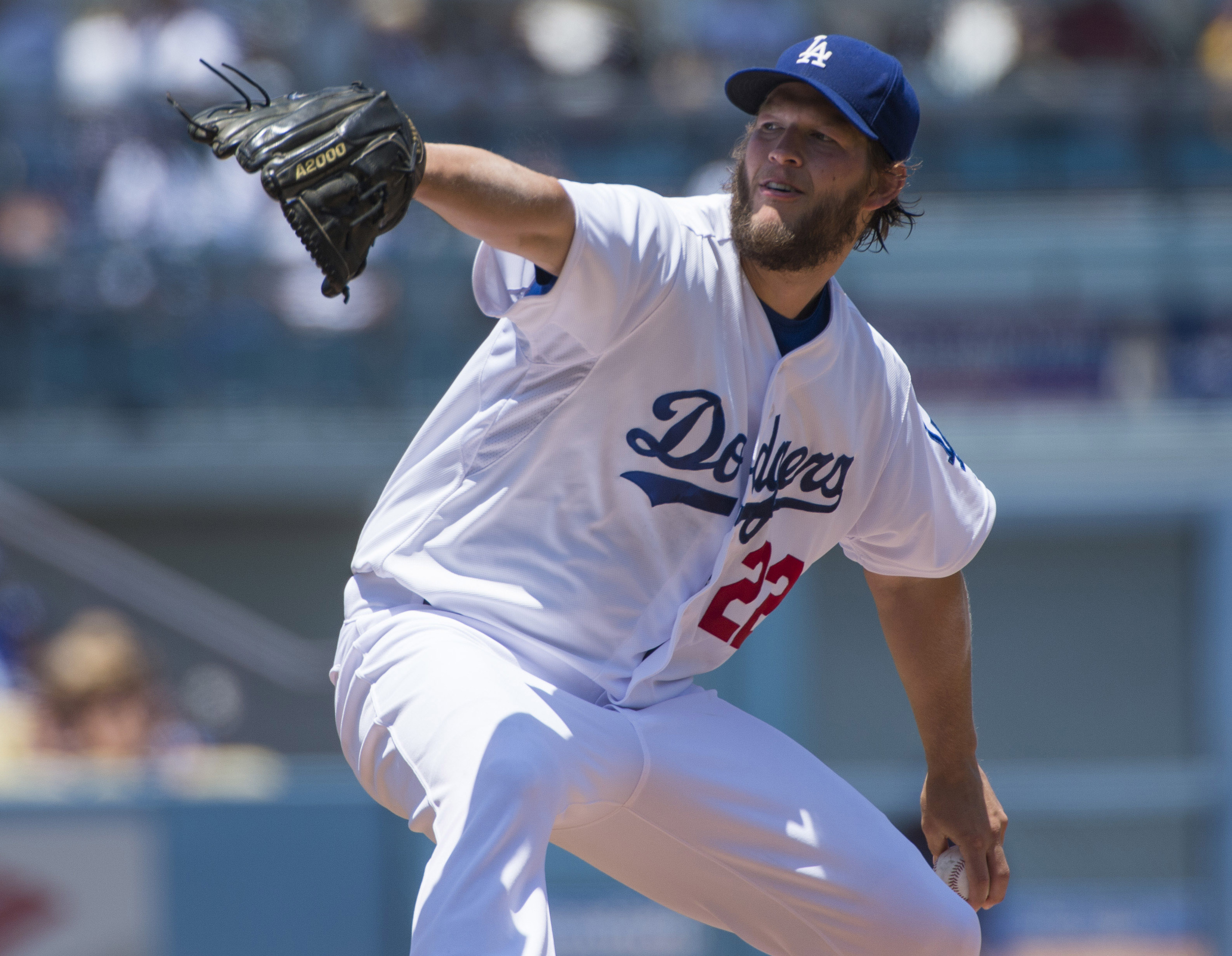 You can find the ballots for all of our staff voters here, in a Google Doc.

Bonus item: I've created a potential starting lineup (optimized by The Book as best as I can) for this National League All-Star team.