The Cubs farm system is loaded and ready to begin bearing fruit. Arismendy Alcantara is the unlikely first call-up.

Share All sharing options for: Arismendy Alcantara: Vanguard of the Cubs future

On July 9th Arismendy Alcantara (air-es-MEN-dee al-CAHN-tuh-RUH, courtesy of Baseball-Reference) made his big-league debut with the Cubs, filling in for Darwin Barney as he left for paternity leave. Alcantara was spectacular in the field in his first game but overwhelmed at the plate, striking out twice in four at-bats. He went 4-for-5 with a double and a triple in his next game, stoking speculation he'd stick with the team. A new statement emerged -- "We'll keep him through July 20th because we won't need a fifth starter until then." By that point this was the difference between Alcantara and Barney:

Upon Barney's return he played in two games, was designated for assignment and dealt to the Dodgers on Monday for a bag of used baseballs a player to be named later (now widely reported to be low-A pitcher Jonathan Martinez). I'll take this opportunity to be the 1,000th person to mention the name Wally Pipp to him.

As a Cubs fan I was vaguely aware of Alcantara, having done some research and writing about him earlier this year. His numbers piqued my interest but I was still in thrall of the bigger-name Cubs prospects like Javier Baez, Kris Bryant, Jorge Soler and Albert Almora. This was probably unfair on my part since he had progressed the furthest in the Cubs farm system, but I can reasonably state that if the knowledgeable Cubs fan had been asked who the first to reach the big leagues would be, Alcantara very likely wouldn't be the name mentioned. It was an opportunistic call-up to be sure, but to his credit Alcantara took full advantage of the chance afforded and placed the Cubs in a difficult position. Darwin Barney was not going to be part of the Cubs future -- what both Barney and the Cubs didn't realize was how soon that was going to occur.

Baseball Prospectus 2014 mentioned Alcantara in two separate sections -- this was in his player profile:

Who doesn't like a switch-hitting middle infielder with speed and power? Opposing managers, that's who . . . The organization has moved him to second base, a position that suits his offensive profile and eases his path to a big-league job. Other Cubs prospects may have louder tools, but don't sleep on Alcantara's broad-based skill set.

His defense at second base now projects to be above average, and his arm is still a plus tool. His feel for the game on offense took a big step forward, allowing him to work deeper counts and drive the ball more consistently. All told, Alcantara has potential as an everyday second baseman.

In his midseason Top 50 list (available to BP subscribers only) Parks moved him to #18:

I’ve always liked Alcantara, but I was too low on him coming into the season, despite a skill set that has three-way impact potential at the highest level (hit/glove/run). Now that the 22-year-old has taken his talents to Triple-A, and exceeded expectations at the plate and on base, the future first-division player has jumped the list and emerged as a top 20 prospect in the game.

Through Monday, July 28th, Alcantara has cooled off somewhat, down to a .258 average and .787 OPS. This seriously debases the term "cooled off," since this ties for 7th-best OPS among second basemen, and his 115 Weighted Runs Created Plus (wRC+) is 11th. His FanGrapsh Wins Above Replacement (fWAR) of .6 would pro-rate to around 6.0, All-Star level production. It's too early after 60+ plate appearances to make grand pronouncements, but he appears to have brought the offensive production he displayed in the minors with him.

His batting eye is decent for a young player --  when viewing his swing rate and whiff rate from Brooks Baseball nothing jumps out. He needs to be a bit more selective, take more pitches and take more walks, but this can be improved with time and experience. He's made two fielding errors, one in center field and one at second (thanks to Daren Willman's baseballsavant.com for the ease in linking to the videos), neither of which were egregious.

Alcantara has one of the longest names in baseball history: 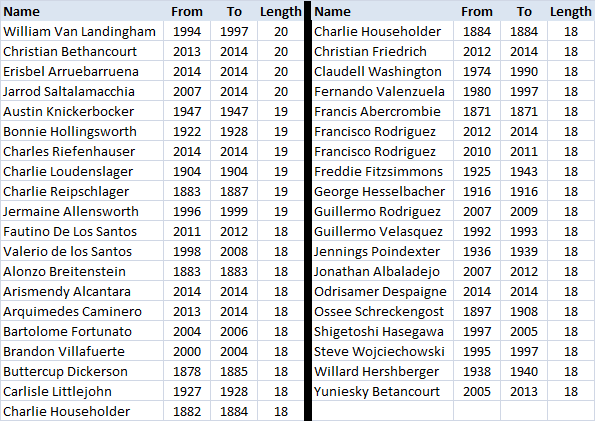 From FanGraphs -- and save the Willie Hernandez comments (actually Guillermo, thus another 18-character name), I've already heard it

Whether he'll have an equally long career, as well as whether it will be with the Cubs and at what position are all open questions. It appears the quartet of Alcantara, Starlin Castro, Javier Baez and Addison Russell to play up the middle has been reduced by one as Alcantara gets more playing time in center. As the trade deadline nears any of these players could be moved for pitchers such as Rays David Price or Phillies Cole Hamels. Baseball has an odd way of valuing potential over actual major league production, which could work in the Cubs favor. I'm reasonably certain of one thing -- none of these players will be a bench player (unless their develop stalls). They'll either play or be traded because of the value they can bring in return, and it's very possible their value will never be as high as it is now.

Darwin Barney could be the ideal back-up for the 2015 Cubs as a defensive late-inning replacement and occasional pinch runner for a team that can produce runs elsewhere in the lineup. Regardless, his removal frees Alcantara to establish his resume during the rest of the season and show what he can do with the bat and in the field.

Every Cubs fan has been told for the past couple of years to be patient, and for the most part understood that the best path to sustained success is through re-building a farm system as opposed to expensive (and often ineffectual) free agent signings. Our younger daughter lives blocks from Wrigley Field and you can hear the organ playing from her place on game days. I suspect I'll be visiting her a lot more in the next couple of years, and as the rest of the young talent develops and eventually joins Alcantara, the Cubs very well could be constructed for sustained excellence. Any team can have a bad century -- Alcantara might be the first of the new wave who can erase those bad memories and create new ones.